So many good movies. Oh my gosh. I’m really having a good time at this year’s SXSW Film Festival. 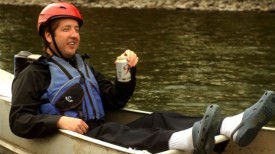 This was another movie appearing at SXSW’s Film Fest that was a kickstarter campaign. The description for the movie said that the story started off with a priest dropping his Bible in a toilet before setting off on a day-long adventure in a canoe.

His superiors at a church find his stories of gun-toting grannies that threaten kids breaking into her car in a grocery store parking lot a bit unsettling and they recommend that he takes a break to clear his head. Somehow he ends up with an older sister’s ex-boyfriend, who he always looked up to as a youngster and they head out for a wilderness river ride. It’s amazing how his naivety gets confronted when exposed to others in the world. It’s comical. His hero goes along, but eventually gets tired of his uptightness and blows up at him. After their spat a pair of Japanese girls rescue them and it turns into an surreal experience not unlike Easy Rider or some bad acid trip. Other parts of the film seem like part heavy metal video and part Bill & Ted as the death metal-like opening graphics (reminding of an old Heaven’s Metal comic strip called “Young Geezers,” where the characters were trying to decipher a Christian death metal band’s logo. One says, “I means “bad penmanship.”) The crunchy guitar tones are so fun as they crash in at Tarantino-appropriate moments. 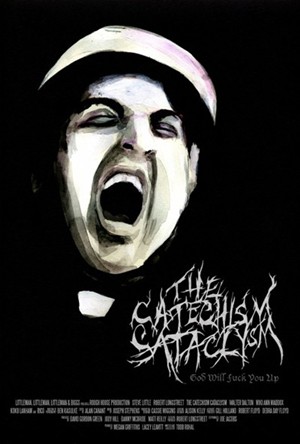 Robbie Shoemaker (Robert Longstreet) does a hilarious job of telling the most bizarre stories with absolutely no resolution endings. One of which was brilliantly creative – about a man who worked on a construction crew building fast-setting concrete columns for a highway overpass. This guy fell in and, before he could be rescued, he was trapped with nothing but a small hole to look out of. A woman passed by and found herself falling in love with the man. She came and spent every day with him. Sharing food and drink through the tiny hole. Freaky creative…

In the end the movie is so bizarre that one has to weigh the amount of laughter the movie caused and balance it out against the bewilderment from its meaning. I recall hearing audible “aww’s” of sympathy when Father William confessed (from his toilet stall in a rest stop at the start of the adventure) to his hero Robbie that he’d never been happy. 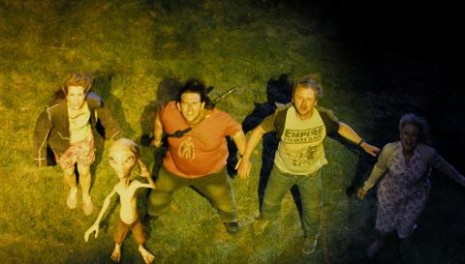 This should be a fun film that’ll get national distribution in theaters. Two Comic Con geeks from the UK realize their dream to attend the illustrious geek fest and then rent an RV to tour around all the rumored UFO hotspots. They run into some unruly rednecks that scare ’em and they accidentally smash into their vehicle in their haste departure. Later on as they travel into the night they come upon a rushing pair of headlights. They’re frightened that it might be the angry rednecks with revenge on their minds. Turns out it’s a different car, which careens off the road and violently flips in a destructive heap. When they approach the scene they come upon Paul, an extraterrestrial.

What ensues is a hilarious adventure as they agree to help transport Paul (voiced-over by Seth Rogen) to safety. When they land at an RV park with Paul in tow they stumble upon an isolated desert girl / country bumpkin raised by her overbearing, zealous and strictly religious father. She wears these glass frames with one eye open and the other shielded by a polarized lens. Her t-shirt sports a design with the slogan “Evolve This!” and features an illustration of Jesus blowing a hole in Darwin’s head with a firearm. She discovers the alien and, in an effort to escape detection, the guys decide to force her into the adventure. Her initial response to the alien is to screech that he’s a demon and when confronted face-to-face with the reasoning creature she resorts to falling on her knees and repeating the hymn “Amazing Grace” in a childish “I’m not listening! I’m not listening!” type of defense mechanism.

The idea of a young earth, the existence of God and the validity of the Scriptures is confronted head-on by the alien. Of course, the alien is funny, sarcastic and completely at ease with the freaked-out individual. He comes off as clearly having the upper hand with the perceived advanced knowledge. At one point the girl’s dad (after calming down from his murderous, shotgun-firing rage) wishes the alien well with the spoken blessing of, “God be with you,” to which Paul dismisses with a, “Whatever, dude.”

While these slanted and biased details might really disturb a Christian audience member, the ones that can get past it and take the jokes in stride will have plenty to laugh at. There’s tons and tons of pop culture (and sci-fi movie) references throughout the movie, which adds an extra dimension of entertainment.

Check out the trailer.

After watching Kristin Wiig play a goober in Paul, it was funny to see her again in the movie that played shortly after in the same theater. Instead of a sheltered girl that was just learning to cuss with flair (and failing miserably) the main character in this comedy knew how to string a few of them together just like a sailor. The movie showed restraint (by keeping her clothed during a couple sex scenes) but still was plenty full of raunchy material.

This was called a “work in progress” and it didn’t have the title treatments, but appeared to be the full version of the film. Another SNL comedian, Maya Rudolph, plays Annie’s best friend, Lillian, who gets engaged and asks Annie (Wiig) to be her maid of honor. She then gets introduced to a Barbie-perfect other friend of Lillian’s and a battle over preeminence in friendship ensues. A one-upmanship contest in toasts at an engagement party cleverly shows the rivalry in escalating action, not too unlike that SNL skit Wiig does so well.

See the trailer and you’ll get a real good idea of this Apatow-produced laugher.
By the way, Judd Apatow (Knocked Up, Superbad) was assisted by director Paul Feig (creator of too-good-to-be-cancelled Freaks and Geeks). 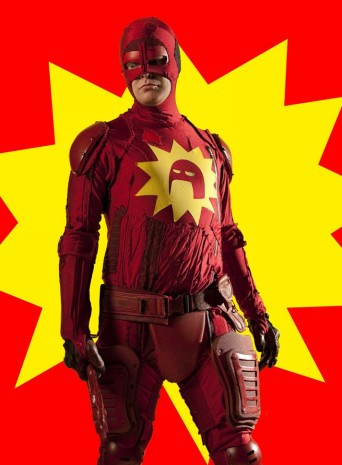 This one was a shocker, mixing goofy comic super-hero dreams with action/adventure and in-your-face blood and guts. Rainn Wilson (Dwight from The Office) plays a lonesome and loathsome loser husband who loses his wife to a drug dealer. He creates a new super hero called The Crimson Bolt that takes on crime with a vengeance. His weapon of choice is the pipe wrench, which is hilarious, but when he uses it for blunt-force trauma, it’s gruesome. Think Tarantino with a cape.

Many times Frank (Wilson) prays to God for direction after losing his wife. Like New Jerusalem and Catechism Cataclysm, there is some real wrestling with God and whether or not they are hearing his voice. “Is that You, God, or is this just my own thoughts?” It’s refreshing to see questions like this explored on the big screen.

In the Q&A session afterward, Director/Screenwriter James Gunn was asked about that. “Have you ever heard the voice of God?” one audience member asked (which relieved me from asking the same kind of question). He shared that this movie was about himself in many ways and the struggles he’s had at times. He shared that he had faith and that his life had been shaped by several moments of clarity like that. I wish I would have recorded the Q&A session, because Gunn shared so much concise information and insight into both the process behind this film as well as the many themes it touched on. One interesting detail was that this film was a labor of love for practically everyone involved. There were a ton of really cool known actors in this one and apparently they worked for nothing (which means “scale” wages in this business, as opposed to the lucrative fees many stars commonly make). This is really impressive when you look at the talent that was in this film: Wilson; Ellen Page; Liv Tyler; Kevin Bacon; Nathan Fillian; Andre Rovo; Sean Gunn; Stephen Blackehart; Don Mac; and Linda Cardellini.

One fascinating anecdote from the “calling of God or not” theme was how sometimes we think a calling or truth is about us and we later find out that we slightly misinterpret things by focusing on ourselves rather than others. This is something that our hero Frank discovers.

Check out the trailer. 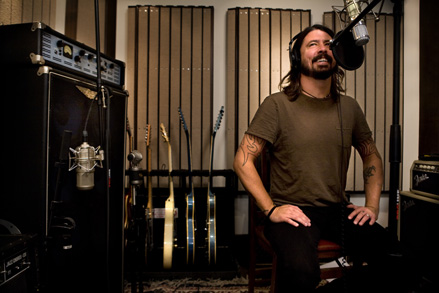 Foo Fighters: Back and Forth

This documentary shows the very human side of this successful artist. There’s some real endearing scenes of frontman Dave Grohl cutting some guitar on the band’s new album (which was recorded at his home) and is interrupted by his daughter, who reminds him that he promised her he’d go swimming with her. He is controlling his laughter as much as possible while he completes the take and the next scene shows guitarist Pat Smear laying down his take while Grohl fulfills his swimming promise.

I’ve long respected this band for not taking itself too seriously. From their campy music videos to the fact that they hit the road constantly and toured the country in a van when they started – when a multi-platinum artist could have easily demanded the lear jet and royal diva treatment. It chronicles the band’s long career carefully, starting from Grohl’s involvement in the revolutionary Nirvana to the one-man demo recordings that became the first Foo Fighters album through each studio album and milestone (including a monumental gig at a sold-out Wembley Stadium.

Like a good music documentary is want to do, it leaves the viewer more endeared to the artist. Check out the trailer.