Music and the Soviet Empire 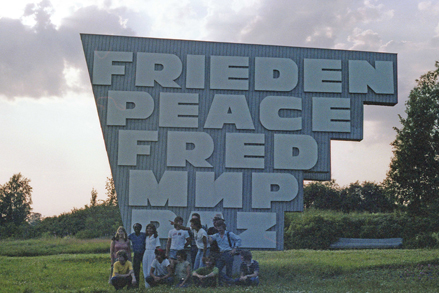 Did music really help bring down the Soviet Empire?

Because, for much of that span, people’s lives could have been put in greater danger by the telling. In fact, many suffered intense persecution and imprisonment for their involvement in this story. Even 20 years after “the Curtain fell,” some of the principals in this story are still nervous about the use of their real names. (Old fears die hard.)

This 23-minute video (link below) is only the initial, surface glimpse into one of the most remarkable untold stories of the transformative power of music; how musicians on both sides of the Iron Curtain risked their lives and freedom — imparting hope through music, and providing the motivation and tools necessary for fanning flames of liberty in the hearts and minds of those living under a monstrous communist regime. This is the story of how the music of a handful of young American, Canadian and Swedish gospel musicians was actually promoted by powerful Soviet media elite, and became featured in the official film of the 1980 Moscow Olympics; how they came to record the music of Soviet Premier Leonid Brezhnev’s favorite composer; and their unprecedented appearance on Central Soviet Television in July of 1981.

This is the story of Living Sound “Team IV,” their friends behind the Iron Curtain, and the supporting staff in England, Sweden and the United States who made all this happen. This is also the story of powerful and elite members of the Soviet Communist Party, who used their positions of influence inside official Soviet media and state-sponsored artistic community to facilitate Team IV’s jam sessions with famous Russian musicians and concert appearances — including production financing, and national distribution and sales of sanctioned recordings — all leading to the aforementioned television show. All this, for a Western band whose music and activities were definitively and overtly “anti-Soviet.” (To this day we do not understand the motives of those particular individuals — nor do we understand the risks they took in their part of this story.) 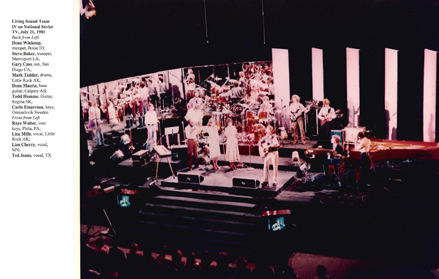 I wish to extend extra-special thanks and gratitude to our former European Director, Mike McKibben and his wife, Nancy, for not only compiling this information and producing this video, but also for their immeasurable contribution as facilitators to these events.

To my daughter, Stormie . . . great big hugs and thanks for spurring us to begin telling this story. She decided, over a year ago, that the subject of her senior essay would be on “How Music Contributed to the Fall of The Soviet Union.” Her own research revealed no greater contribution to that process than that of the very band with which her own father bounced around on a tour bus for two years. Namely, Living Sound, Team IV. Yes, I was there, on that sound stage in Central Soviet TV headquarters, on July 23rd, 1981, when 500 of Moscow’s elite’s gathered to hear a contemporary gospel group perform for a live taping of music, which included not only that of state-approved Soviet composers, but also music by Western songwriters and lyricists. Music with overt messages of hope and liberty.

As I’ve said many times before, those of us on that stage, and in that studio audience were uniquely bonded together that night in the collective, yet unspoken realization that we were all “getting away with something.” Something, important.

This video is only the beginning of the telling. There’s so much more — some of which is too sensational to tell before we have gathered together all the personal testimonies and official records to corroborate the activities of these young musicians and their facilitators on both sides of the Iron Curtain. Yes, there’s Cold War intrigue, spies, the KGB, car chases, The Pope, smuggling, a mid-air collision, strip searches, detentions, imprisonments, creative and financial struggles, religious extremism, and even a “Singing Revolution.” Put another way: it’s Argo meets Almost Famous. 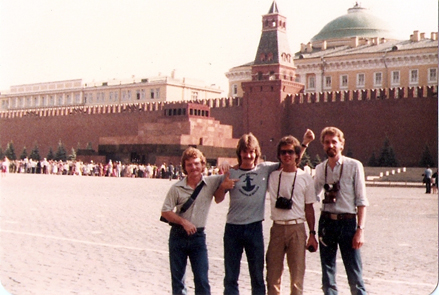 I happen to know this version of the telling is all true, because . . . I was there. Fortunately, with the internet, social media and the like, we have been able to reconnect with nearly every participant in this grand tale — though a few dear friends have passed. All 12 of us who stood on that Moscow TV stage, 32 years ago, are each sharing emails and Facebook messages — almost on a daily basis — putting together the memories of ours and those other Team IV members who preceded us with their own exploits in the Soviet Union and inside other Soviet Bloc nations.

There’s also the musical and personal relationship aspects that played no small part in this tale. While we lived it, we referred to it as “concentrated real life” — where, on a 40′ tour bus, there was no ignoring or avoiding the interpersonal struggles of more than a dozen people living, working, playing, traveling and making music together, for months on end. There was also the disconnect between those of us on the road and those in the corporate ‘home offices’ in England and Oklahoma. There were divergent, sometimes even irreconcilable visions for the direction of the band — even flawed information sent across oceans and continents — long before the days of email and international cell phones could help to instantly reconcile the passions that might be inflamed by miscommunications. Yet, somehow, this wonderful thing — this most unexpected and unlikely piece of history really happened.

Again — why’d it take so long to begin telling this story? Hmmm. Mainly, because as these events were unfolding, we were just kids — sometimes brave, sometimes scared, and often oblivious to what was really going on around us. Some of our number felt we were “on a mission from God,” while others among us just wanted an outlet to play music, and instead found ourselves inadvertently swept up in the accompanying chaos and craziness of it all — neither brave or scared, just wide-eyed at what was happening. Since 1981, we have each raised our own families and pursued our own careers and interests. But, after 32 years, we are all still bound together by this shared experience, and several of us have spent the last couple of years piecing together all the historical details, as well as the personal testimonies of those involved — while also attempting to make an honest assessment of our role in history (if any) as we look back through the prism of time.

Here are 23 minutes to whet your appetites for the rest of the story. (It’s coming — I promise.) I hope you enjoy it, and I look forward to hearing your comments.

There are far too many to thank, here — but their names are all in the video. There’s no narration, so please take the time to read the text as it rolls over the music track. Hit the “pause” button, as necessary. 🙂