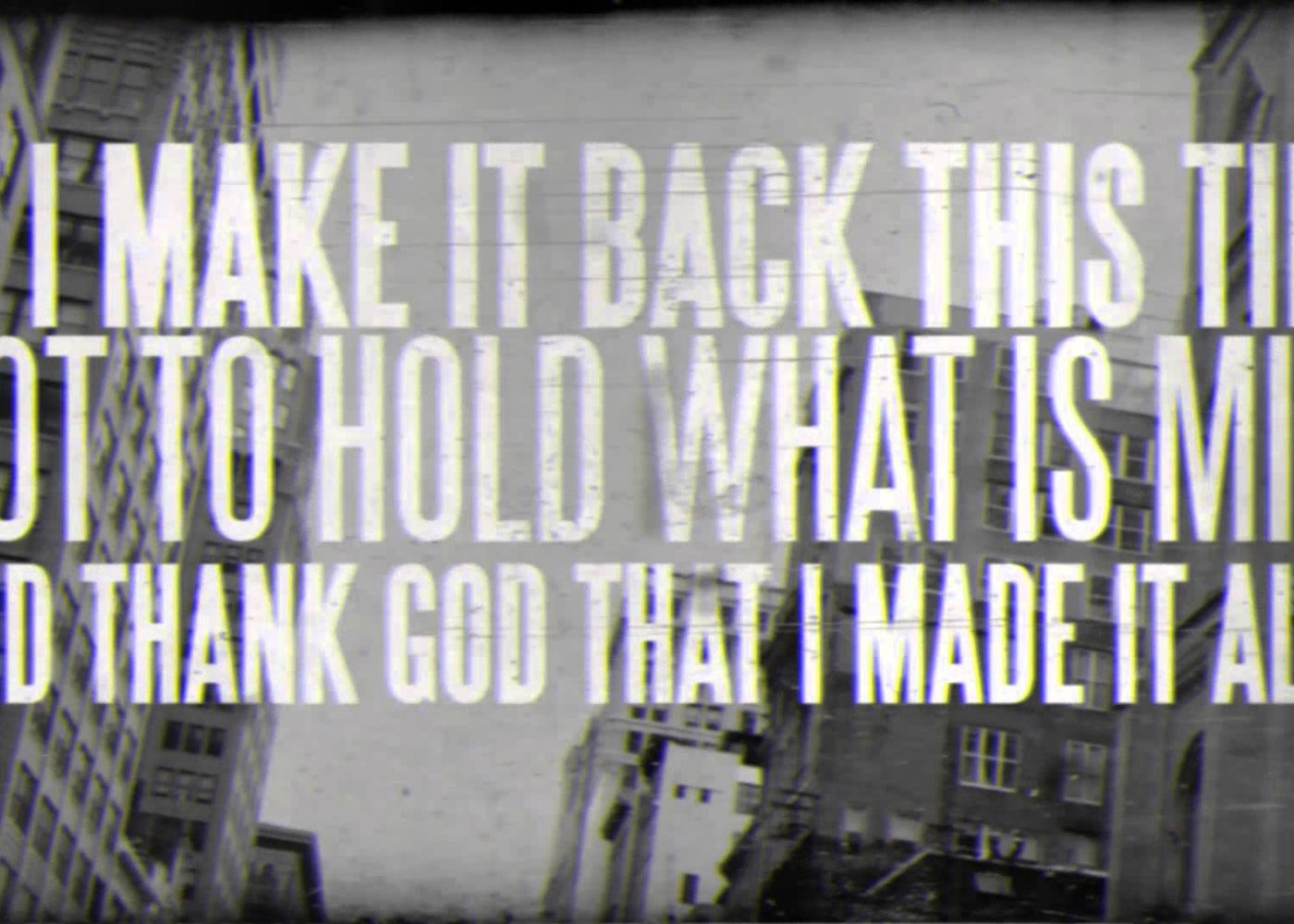 How 'Southtown' brought The Ghost Inside and POD together

I first heard P.O.D.’s “Southtown” in high school. It was intensely edgy for my church’s youth group at the time, and my band was determined to cover it at the Wednesday night service we led, to push the envelope a little. As the band grew in popularity, P.O.D.’s fans started to become something more than that, a concept the band embraced. They created The Warriors, their official-unofficial fan club, a name to unite them all as they did work for God, paving a way — not just for Christians — but for the nu-metal genre, helping to define its sound with emcee Sonny Sandoval leading the way.

Even in Texas, the San Diego, CA-true-to-the-core P.O.D. was our band. They loved the underdog, they acted like we did and they challenged the sound of what was popular. Their victories became our victories. P.O.D. was every man’s band; every one was rooting for them. Pretty soon, even MTV was playing their videos, and they were starting to make appearances on TRL. “Rock the Party (Off the Hook)” was their first TRL No. 1 single, but that wasn’t before the band was introduced to the world with the first single from their major label debut, “Southtown.” P.O.D. wouldn’t have it any other way; it was (and is still) important to them they always remember where they came from, and “Southtown” is their hometown in musical form. They’re a made band, one of the original people’s champions.

The Ghost Inside is also a people’s champion. You’ll almost always see the Dodgers’ ubiquitous ‘LA’ monogram somewhere around them, and, as young skaters and punks, it’s those Los Angeles streets that built and bred them. It was also their people, the ones who also felt like underdogs and challengers, that lifted them up to a slot on Warped Tour this summer coming immediately after a major, successful tour with The Devil Wears Prada.

I had the honor of introducing P.O.D. guitarist and founding member Marcos Curiel to The Ghost Inside drummer Andrew Tkaczyk. The two bands’ paths had never crossed, and it seemed like the best time to get together and revisit P.O.D.’s influence and pay respect; The Ghost Inside, by even choosing to do the song, is bestowing the highest honor. But as it would turn out, Marcos would be inspired by The Ghost Inside’s take on the track that originally set P.O.D. on a multi-platinum, hall of fame career, and he had plenty of positive things to say about Tkaczyk‘s band. As long-time veterans of the game, P.O.D. knows the age old truth: To get respect, you give respect. And so far, it hasn’t done either band wrong.

Marcos: First, before we start, I heard the cover, and your version, and I’m just stoked you guys decided you wanted to cover our tune. You did a good job at it.

Andrew:  I’m glad you liked it, man. The idea came out of nowhere. We were actually listening to the song when we got the offer to do the Punk Goes… ’90s, and right there, I was like, “We should do this song.” Everyone right away was like, “Yeah, absolutely. Perfect.”

David:  Andrew, why don’t you talk a little bit more about that. Obviously you guys were fans of P.O.D. at the time, otherwise, you wouldn’t have been listening to them, whether it’s in a tour bus or 10 years ago in your headphones skateboarding. When did The Ghost Inside get into P.O.D.? When did it begin to inspire you? Did you listen to it in junior high and play it growing up, that type of stuff?

Andrew:  For me personally, I grew up through middle school and all that skateboarding. That’s when I got into P.O.D. Actually, I bought this CD. It was MTV’s Return of the Rock. I don’t know if you remember that.

Andrew:  P.O.D. had a track on that, and that’s the first time I heard the song (“Southtown”). Immediately, I fell in love with the band, and I’ve been a fan since. It was probably seventh grade. I was probably 12 years old.

David:  Marcos, you’re about 40 now, if that’s correct. Am I allowed to say that out loud?

Marcos:  I will say this in my defense, in our defense. We’re still here, and we’re still doing it!

When people tell us how they were influenced by (P.O.D.) at that time, even now, it’s like, that’s awesome, man. That’s what it’s all about.

Marcos:  We’ve seen a lot of trends come and go, so we’re blessed to be here. When we hear stories, and when people tell us how they were influenced by the band at that time, even now, it’s like, that’s awesome, man. That’s what it’s all about.

Marcos:  Actually home now, man. Got back from Brazil and Mexico City.

David:  Was it packed in Mexico City? That’s your home people, isn’t it?

Marcos:  It is. The Latin markets are insane, man. That’s probably one of our best markets. I just put them in as a whole.

David:  It sounds like we know where The Ghost Inside needs to play next.

Andrew:  (Laughs) For real! The Ghost Inside has never been there, but with my old band, we did a 10‑day tour in Mexico, and I felt like I was in the Beatles or something. It was ridiculous.

David:  Marcos, tell me a little bit about what you thought about the cover. You don’t have to be negative about it, or you could. If it sucked, you could be like, “Dude, that was awful. Try next time.”

David:  When you heard it, what were you thinking? What do you think about the musicianship of it, and how they did it differently, or how they kept it true to the original?

Marcos:  Well, they definitely kept it true to the structure … (and) I thought that they did a hell of a job.

This one, I truly liked because I’m a fan of that style of music that (The Ghost Inside) does.

Marcos:  I was stoked, man, because when you hear some people’s covers of your band, you’re like, “That’s cool.” This one, I truly liked because I’m a fan of that style of music that (The Ghost Inside) does. When I first heard about the song, I was a little skeptical. I was like, “Let me hear this.” Then I heard it. The first time I heard it, I was like, “This is awesome.” Actually, Sonny was going to do this interview, and then I was like, “I’ll do it.”

David:  The management told me he’s in Israel or something like that. I was like, “Of course Sonny’s in Israel. Why wouldn’t he be over there?”

Andrew:  I’m glad you guys felt that way, man. We didn’t want to change it. We wanted to just be true to the (sound and feeling of your) songs. That’s what we went for, and I feel like we accomplished that pretty well. We were sitting there going, “Man, I wonder what they’re going to think when they hear this?” We were wondering what was going to go on with that, so I’m stoked that you guys (enjoyed) the song.

Marcos:  Do you guys play it live?

Andrew:  We haven’t played it live yet. It comes out on the 1st, I think. (Editor’s Note: The album is now out! You can grab a copy here.) Once it comes out, kids have already been commenting about how stoked they are to hear it. I feel like it could become one of those songs, maybe we’ll come out for an encore and do that or something.

Marcos:  I want to play it. That’s my goal. If we ever cross paths, you’re just going to have to jump up on stage with us.

David:  There it is! It’s on record now.

Marcos:  The thing is, that song was an introduction to the world that we came out of, where we’re from and what we were about. You don’t realize how that song has influenced so many different people. I was talking to the guitarist from Quicksand, and he was like, “Yeah, man. I was at work. I heard ‘Southtown’ come on, and I was like, ‘Man, that’s the stuff.'” I was going, “Really?” This guitar player from Quicksand is listening to “Southtown”? That’s pretty amazing. It just feels good now, because when you write stuff, you just never know who’s listening to your music and how you’re inspiring them in any way, shape or form.

David:  For you, Marcos, I think a lot of what resonates with people, especially with musicians and people like Andrew, was the honesty behind the song. It was very real in a time when MTV was getting out of the Headbangers’ Ball stuff and becoming the TRL behemoth it was for a decade. You provided them something honest, real. Something to latch onto.

Marcos:  It always repeats itself. It seems like MTV’s always doing that. (Laughs.) They’re not even playing videos anymore, and it’s always the bands that have come out being real on there that actually get noticed more than people would think. The record labels usually don’t think that it’s going to be that way. They’re like, “We’ll just put this out. We’ll see what happens.” We weren’t really getting the support we wanted from our label. It was more, “You guys just do your thing,” and then as soon as you see success, they’re like, “We knew about this from the very beginning.”

David:  Andrew, if you had to pick some other P.O.D. song besides “Southtown,” do you think you would probably pick something off Satellite?

Andrew:  Yeah, I would definitely have to say, even though I think “Southtown” is my favorite P.O.D. song, I think my favorite record is Satellite. I’m sure, Marcos, you’ve probably heard this a lot. If we could have done it, I would have liked to have done “Alive.” That song’s incredible, and I think that would have been cool. It’s got a lot more melodic stuff in it, and The Ghost Inside does a lot of melodic stuff.

Doing “Southtown” still, I’m super stoked because, if you would have told me when I was 12 years old skateboarding around my neighborhood, “Someday you’re going to do a P.O.D. cover and then do an interview with their guitar player while you’re on tour in Europe,” I probably would have s-t my pants.

David:  At least wait until we get off the phone!

David:  It can cheer you up sometimes.

Marcos:  I’d say that’s exactly what I was trying to say right now. Thanks again, Andrew, and you know what, dude? Much respect — continuous respect — and give them hell out there, man.

Marcos:  Awesome, man. Thanks a lot.

The Ghost Inside will be on tour in Europe in May and will be playing Warped Tour this summer.

The Ghost Inside with POD was posted on April 3, 2014 for HM Magazine and authored by David Stagg.