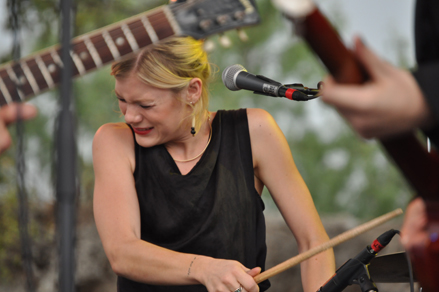 Cold War Kids had a large and happy crowd swaying with their melodic tunes, which only felt better with the nice breeze on a lovely Austin afternoon. Multiple percussion, like a shaker here and a cabasa there, add some subtle spice to their thick grooves. Everyone picks a first set to begin their festival experience and this was my choice. It seems like the band has gotten less angry and more laid-back as they’ve perfected their songwriting craft, but they still have their moments of angst and tension. They’ll kick back and settle into a groove and let that move the song along, but never lose the audience with meandering or wandering jams. The vocals and the instrumental parts serve the songs really well. Their set ended with several gems in a row: “Skip the Charades,” “Louder than Ever,” “We Used to Vacation” and “Saint John.” 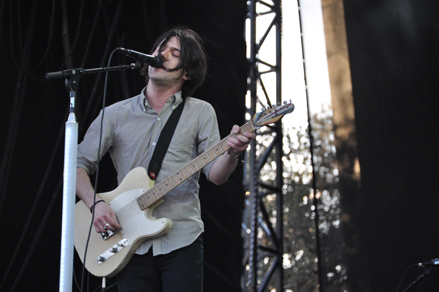 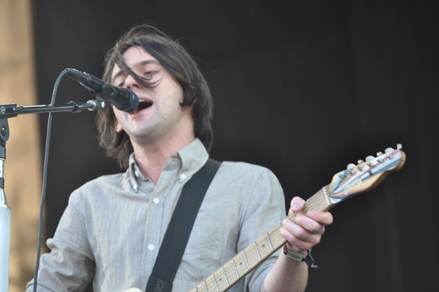 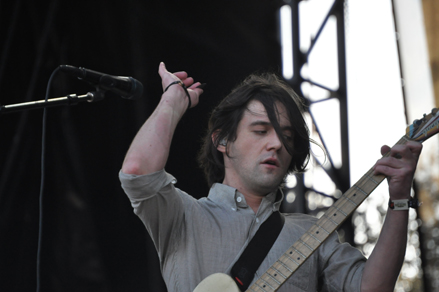 Bright Eyes played a giant AMD stage and delivered according to the high expectations fans have of this prolific band that wraps around the talented Conor Oberst. While the frontman commands most all the attention no matter if its a proper Bright Eyes show or one of his solo shows with the Mystic Valley Band. Never one to waste a bunch of time between songs or explaining his words, he tells story after story wearing tight musical clothes with the kind of heartwarming familiarity of a Dashboard Confessional (though not as many sing-along). Though I haven’t heard him say so, I bet this is one of those artists that Bono is interested in listening to (as he’s stated that he’s “only interested in hearing artists that are either running to God or away from him”). In the second to last song Oberst describes parents who “found their religion but sleep in separate houses.” Compelling stuff, indeed. During the last song (“One For Me, One For You”) he sang the line “…one for the broadcast” and he practically ate a camera lens that, of course, was splashed on the two giant video screens that frame each side of the stage. 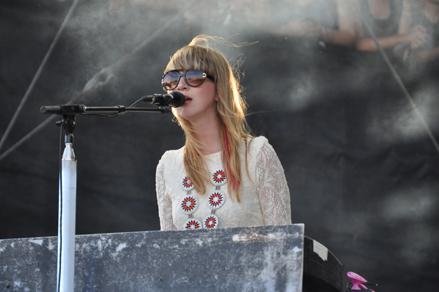 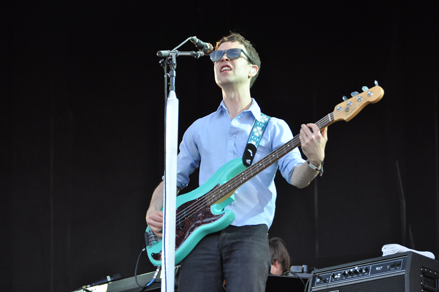 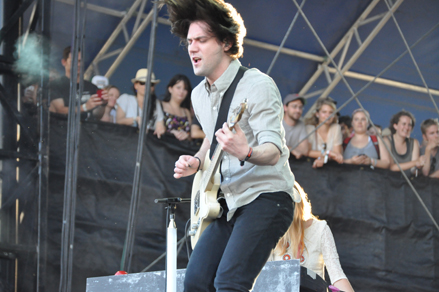 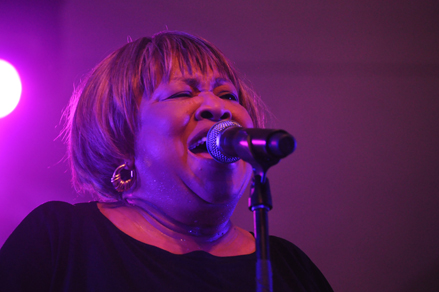 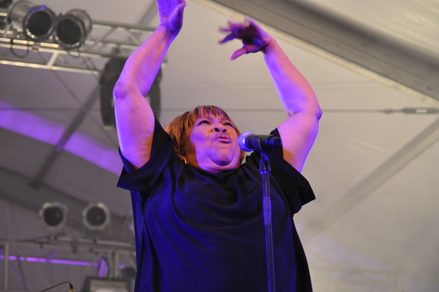 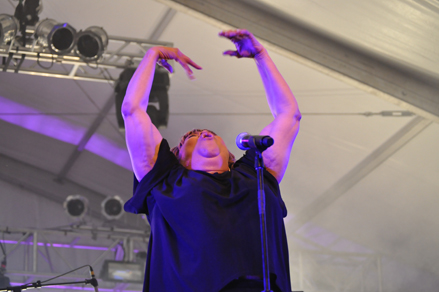 Mavis Staples wowed an overflow crowd in the Vista Equity covered stage with her seasoned, veteran yet still as soulful as the day is long music. Her voice still comes from a place deep inside, even though she’s some 72 years old. A consumate performer, she extolled the virtues of Austin and the loyalty she has for her Chicago home. She spun “The Weight” as if it were her own early on in her set, telling the audience about “pulling into Nazareth” and promising that taking a load off Fannie would be “putting it right on me.” Then, to end the set she was able to bring the house down with her mega hit, “I’ll Take You There,” which she flat out owned.

At the same time across the large Zilker Park was Sara Bareilles belting out her tunes on the piano and dancing around the wide Austin Ventures stage. A mighty big voice fits in that tiny body.

Coldplay performed like they were comfortable in their skin and it must be nice to have so many good songs in the catalog, which makes a 90-minute performance so enjoyable. All the hits you’d expect to hear and some back-to-back (like “Yellow” going into “In My Place” early in the set and “Politik” to “Viva La Vida” near the end). They tossed out giant balloons and had some great computer-generated graphics on the giant video screen behind them on stage as well as the two on either side. The lasers dancing around the night sky were cool, too (and no, I’m not talking about that guy or girl that brought their little red laser pointer that flicked and flashed like a rave dancer with glow sticks, though now I just gave him a shout-out. sigh). Once the stage went dark everyone knew an encore would surely follow and, since they hadn’t played it yet, everyone knew it’d be “Clocks.” It was. It sounded a little different, as if the guitars had a little more prominence than that repeating piano line. What followed was poignant, though, as Chris Martin sang out a slow and melancholy few lines from “Rehab” as a somber tribute to the departed star. Without missing a beat they segued into “Fix You,” which added the ironic twist.

Kanye West is an artist thats’s hard to have expectations of going in, since he’s so unpredicatable. As soon as he came out on stage, his energy was contagious. Everyone was dancing and having a good time. The music was tight and big. He seemed to make an effort to make his performance more about the people around him. 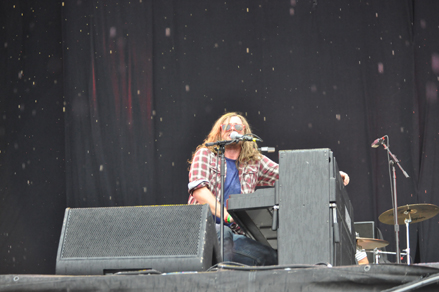 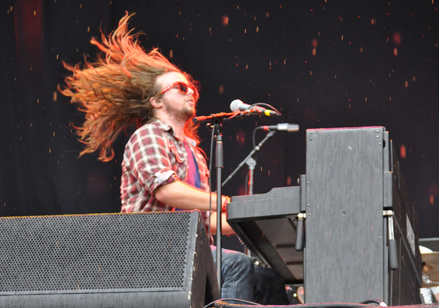 J. Roddy Walston & The Business was my “wake up and smell Day 2” moment on Saturday and it was a doozy. With long scraggly hair, with brightly-colored flamboyant sunglasses and an unbuttoned flannel shirt, they showed the large crowd was the South has been looking and sounding like long before Seattle was the focus of the music world (even though they’re from the decidedly North city of Baltimore). Whether it’s rocking along with the piano during “Don’t Break The Needle,” the cover of Little Richard’s “Lucille” that they played or letting the slide guitar shine bright in “Use Your Language,” this band lives up to their name and brings the fun in a serious ways that’s business-like. Obviously, they’re as fun to watch as they are to listen to. 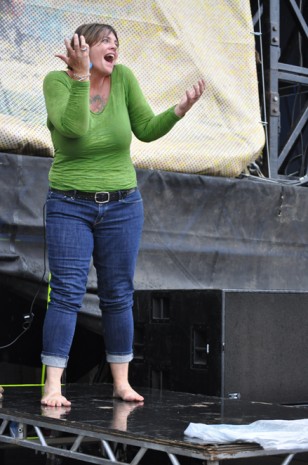 I think one of the ladies doing the signing service for J. Roddy Walston enjoyed doing her business during this set. 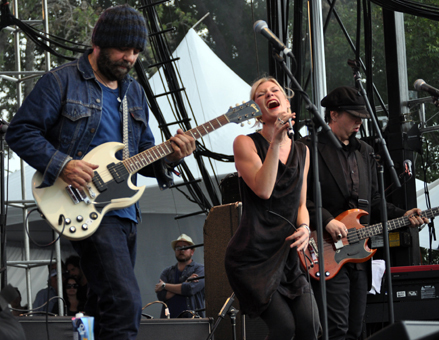 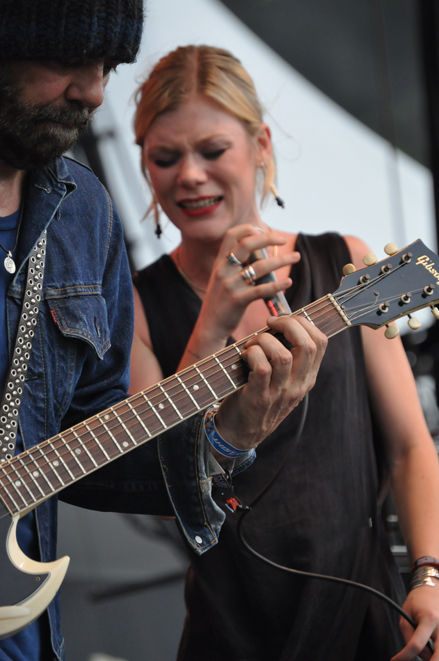 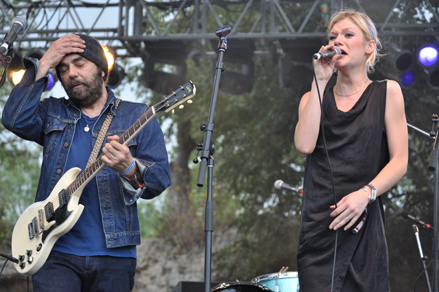 Daniel Lanois’s Black Dub was one of those special bands that you hope to find at a festival like ACL. Austin City Limits prides itself in hand-picking artists with special performance qualities. While you will catch artists with big radio hits, you’ll pretty much never see someone that doesn’t know how to deliver in a live setting. This legendary record producer brought his latest musical experiment to the fest and, after a few pregnant minutes after their designated set time came and went, they launched into an atmospheric and jam-based set that worked. With a steady beat drummer (Brian Blade) at stage right, Lanois played guitar at center and vocalist and part-time second drummer Trixie Whitley and bassist Daryl Johnson flanked to his left. During tunes like the bluesy “Last Time” the slender Whitley would handle most of the lead vocals. At other times she’d jump on the small drumkit at the back of the stage and sing somre more. After three songs she left the stage and Lanois stated, “and so ends the cinematic portion of the set.” A song later Lanois sat down on the steel pedal and played a dreamy instrumental. “After referencing Jesus he sang about “…still so much work to do.” It was a pretty hypnotic show. Nothing too flashy, save for some awesome guitar work, but quite good. It was funny to see the look on the stage manager’s face when the band launched into one more song with about 45-seconds to go before their scheduled end time. He was about to blow a gasket as he used body language to communicate that they needed to stop playing. Sometimes it’s the little things that entertain. 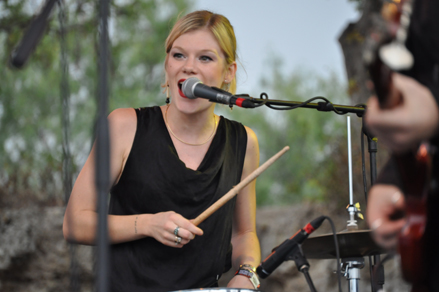 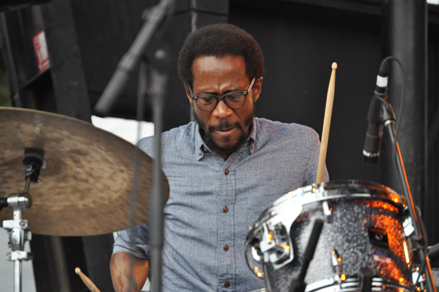 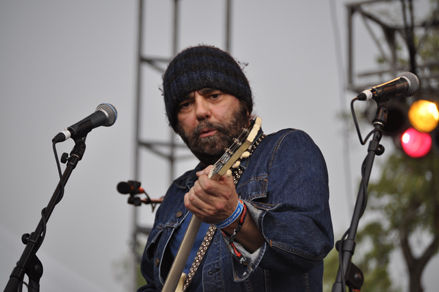 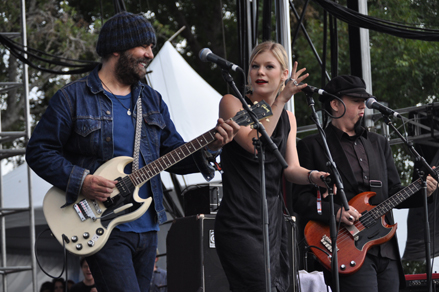 Alison Krauss & Union Station brought a hootnanny to the giant Bud Light Stage at the far east end of the park. She plays a mean fiddle and her voice is both soft and strong. 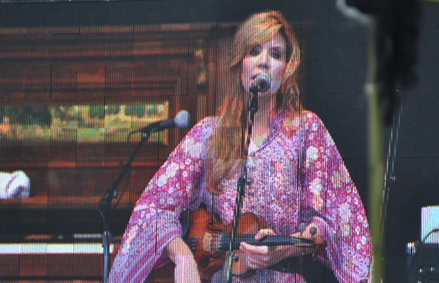 The Lee Boys lay down some awesome pedal steel guitar playing, doing right by the Sacred Steel movement. There was much more going on over these three days, but hopefully this little snapshot will convey the message of how hip and eclectic this festival is. Happy 10th Anniversary, ACL.