A Plea for Purging Interview 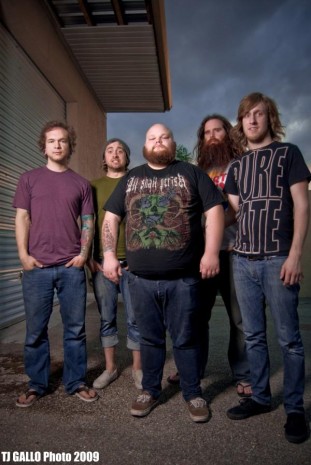 HM: If your band was not around and you could be in any band, what band
would you be in?
Andy: I’d probably pick to be in Coldplay, Radiohead or Death Cab for Cutie. All three are on my top bands list, and not to mention, they all make some pretty good money! haha.  It’s not about the money, but when you’ve been doing it as long as I have, the thought of making a real living off of playing music sounds real nice.

HM: What is your opinion on the whole “Christian band” label?
Andy: I don’t really know what that term means.  It’s been dragged through the water and pulled in so many different directions.  It’s been made to fit the mold of what ever bands want to use it, for what ever way. I have a real problem with the fact that there is an industry for Christianity.  Let’s do a little word experiment. “Christian Music Industry” / Christian music commercial production and sale of goods, sounds like there are some people making money off the name of God, now doesn’t it?

HM: What is your favorite venue to perform in?
Andy: This is a sad question.  My two favorite venues aren’t around any more.  The Brother’s Pizza in Owensboro, KY was my number one.  It was a 150 capacity room that we used to pack out with like 400 kids in there, tons of stage dives and circle pits.

My second favorite was our home-town venue, Rocketown, in Nasvhille, TN.  The old Rocketown building has been demolished, so the city could build a new convention center.  I hope that the new building will be just as fun to jam.

So right now, my number one favorite venue in the country to play is, The Vault in Buffalo, MN.  It is much like The Brothers.  Pretty small room that is always over-packed!  The stage dives there are at a record-high.  I love that place.

HM: If you were not making music, what would you be doing?
Andy: If I were not playing music I have no clue what I’d be doing.  I don’t think about it much.  I do like modern furniture and interior design. I think it’d be cool to get into that but I never went to school. I also have had a few jobs dealing with the fashion industry, from screen printing to merchandising.  I enjoyed that too.  Inevitably I really enjoy any kind of marketing and advertising.  So we’ll see where all of those interests take me after the band.

HM: What is the saddest part about being you?
Andy: Wow, what a morbid question, straight and to the point.  haha.  I guess I’d have to say that living life always on the verge of being broke.  I ride the line of being able to pay my bills and eat on the daily basis.  Money is not something I have a lot of.  Most the time I don’t have any.  I’d have to say, being broke is the saddest part about being me.

HM: Which of the bands on this tour is creating the most laughs amongst
the whole entourage?
Andy: Welp, We haven’t started the tour yet but I can go ahead and tell you that it will be a close tie between us and Blessed by a Broken Heart for funniest band on tour.  I think I got a few tricks up my sleeves, as I’m sure they do as well.

HM: What are your thoughts on how your music is actively influencing the culture around you? Partly because bands like yours are not just stuck behind the four walls of some youth group church room. You’re playing out in clubs, etc. Also partly to blame are people in the world opening up their minds to listen to Christian bands…
Andy: I guess all I can say to this question is we are trying to be completely honest with our listener about our lives and the things around us.  This is all we can do.  If they are influenced by it, I hope that it is for the good.  We are speaking our minds but at the same time it really is our opinions.  I hope that the listener doesn’t live by my words but maybe be sparked to learn for themselves.

HM: What is one or two pieces of gear, gadgets, etc, that you have to buy all the time? (like batteries, tuners, and strings, whatever…). I’m particularly interested in the things that you didn’t plan for, that were surprises…
Andy: I am just a singer so I don’t get anything.  But, it seems like we are buying tubes for our guitar heads all the freaking time.  We go through drumsticks and guitar strings like nobody’s business too.

HM: What do you think is going to happen with this current generation?
Andy: That is a real broad question.  I have no clue.  The world looks like its going down the crapper.  I know what we need to do.  We need to lower our consumption rate.  We need to simplify our way of living so we can save valuable resources our earth has to offer. I know I’m the first person that needs to take my own advice.

HM: What do you hope people come away with from the experience of seeing this show?
Andy: I hope the show goers of Scream the Prayer walk out informed.  I hope they don’t walk away believing every word that comes off the stage, but that they are sparked to figure out things on their own.  From our set in particularly, I want them to see our honesty and believe that we care about them.  I hope that they walk away feeling like we had a
party!