My Epic is headlining a summer tour sponsored by World Vision.  It’s called The Hunger & Thirst Tour, and runs through the month of June.
“We head out on tour at the beginning of June with So Long Forgotten and A Hope For Home.  We are very excited and will be playing several songs from our upcoming album Yet.  We look forward to seeing familiar faces and meeting new ones!”
Yet is scheduled to be released on July 6, but you can hear “Lashes,” a song from the album, now at My Epic’s Myspace: http://www.myspace.com/myepic 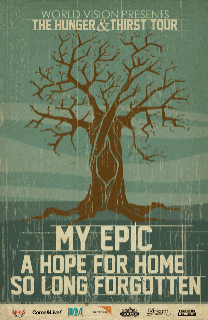