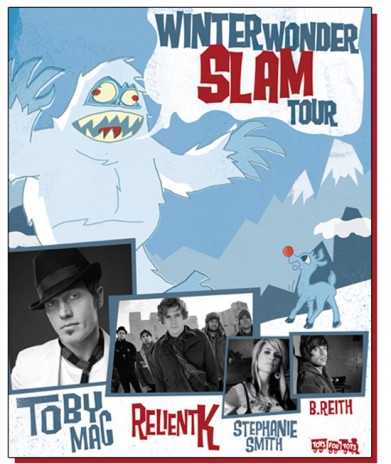 August 17, 2009…Nashville, TN…GRAMMY ® Award winner, TobyMac slams into the holidays once again as he headlines his popular Winter Wonder Slam 2009 Tour, also featuring the talents of: Relient K, B.Reith and Stephanie Smith. For the first time ever the tour will head to the West Coast as well as making its way to New York City, Fairfax, VA, Pittsburgh and numerous other cities across the states.

The tour continues its tradition of giving, as Winter Wonder Slam teams up with the U.S. Marine Corps to help with their Toys for Tots campaign. Toys for Tots aims to provide tangible signs of hope to economically disadvantaged children at Christmas. Music fanatics will be encouraged to bring an unwrapped gift to the event as Marines will be on site to collect toys at every venue. Each year, Winter Slam produces multiple sell-outs and sets records for the amount of gifts collected for Toys For Tots.

This will be the fifth year that TobyMac has brought his highly energetic show to the holiday season to crowds across the country. This family reunion show is one that keeps bringing people back for more each year sharing the true meaning of Christmas.

With over 10 million career scans, GRAMMY ® Award winning album “Portable Sounds,” recently certified GOLD by the RIAA, is TobyMac’s latest studio and highest solo debut ever on the Billboard Top 200 chart (No. 10), which hit No. 1 on SoundScan’s Contemporary Christian Overall chart in its first week as well. All three of TobyMac’s solo projects have received numerous GMA Dove Award nominations as well as GRAMMY nominations. In addition,  “Momentum” (2001) and   “Welcome to Diverse City” (2004), both were awarded RIAA Gold Certification. Along with sold out tour dates, back-to-back radio hits, being named the GMA Dove Award’s 2008 Artist of the Year, and R&R’s Christian CHR Artist of the Year in 2007, TobyMac was also nominated for a 2007 American Music Award as Favorite Inspirational Artist.  His song “Ignition” was also recently chosen to play during the 2009 Superbowl as The Arizona Cardinals entered the stadium in Tampa, FL.