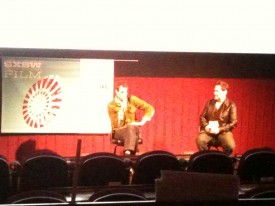 I saw New Jerusalem last night. I was slightly surprised by the uber-slow pacing of the film. Short on dialog and long on silent facial expressions makes for a snooze-resist time, but it was still a fascinating look at what I perceived to be an outsider’s perspective on evangelical Christianity. During the Q&A session with the director, R. Alverson, he revealed that he didn’t have much of a reference point for evangelical Christianity. It was filmed in and around Richmond, VA, which made me wonder what the culture there is like. That’s where the band Lamb of God resides and their first incarnation was Burning the Priest, I think. I wonder if there’s some offbeat cultural things going on there that might taint the presentation of the Gospel for lots of people there. I don’t know.

It was a fairly balanced presentation of Christianity, though one of the main characters is a little over-the-top (okay, it was a lot over-the-top) in how he “evangelized” his friend and co-worker. Alverson shared how the story involved the symbiotic relationship that ensued when a believer and a somewhat seeking/somewhat lonely skeptic spent lots of time together. Eventually, they would come to depend upon each other and not necessarily need the other to change, but one benefited from the differences in the other.

It was really intriguing to hear that. It’s kind of cool how our relationships can balance each other out. Life on earth is good like that.

Another statement he made, but censored himself by saying it would take a long time to expound on it, was his response to a question I posed from the audience. (My question was asking about how the casting was done for the church service scene. I wondered if it was cast and role-played or shot like a documentary from a real service.) Turns out it was a real service, but a church hand-picked because it was outside the perceived norms of what he thought evangelical Christianity was. It was multi-racial. It was a diverse congregation according to economic status. He mentioned seeing men with tattoos all over their arms weeping.

But he said it left him with “more questions about liberal America than about conservative Christianity.”

I’d like to follow-up with the guy more about that. 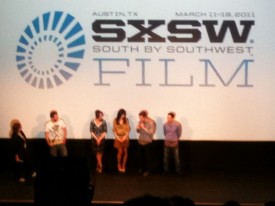 Earlier in the evening I had the chance to see the World Premiere of Source Code. It was a really enjoyable movie about a soldier involved in a special operation that allowed him to re-live 8 minutes of a terrorist event in order to solve and prevent the crime. It was exciting and it also moved me. You get save-the-world drama, sci-fi suspense of belief & the value of relationships.

The Q&A afterwards was fun. I wanted to stand up from the upper balcony and ask this question:

“I’m a time traveler and I was curious to know your thoughts right now as you discover that this film is going to break all the box office records set by Avatar last year…?” Ah, but I didn’t ask it.

Spoiler alert! Spoiler alert!
This is a major motion picture that you will probably see in the theaters in the next month, so please do not read this last paragraph below. It’s not exactly a real spoiler. The information is pretty much explained in the beginning of the film. It doesn’t reveal an ending, but some of the details might be best not known going into this fine film.

Okay? You’ve been warned!
Someone asked the writer for the story, “What happens with Sean? What about his soul?”
And he answered by stating flatly, “Sean is dead. You just need to get over that.”
It was a funny moment for us in the theater that had just seen the movie.