Rage Against the Machine

I don’t say it as a writing trope: Rage Against the Machine is a once-in-a-lifetime band. I feel extremely lucky to have been able to see them live, when I was younger, on Dec. 13, 1999 in the wake of The Battle of Los Angeles release. That album would turn out to be their last original work; the band disbanded less than a year later in October 2000, a shade over a month after bassist Tim Commerford climbed a structure at the MTV Video Music Awards after losing a Best Rock Video award to Limp Bizkit. The band would posthumously release a covers album, Renegades, in December 2000, three months after the award show and two months after going their own ways. To date, it is the last proper album we have from the band.

It’s been 15 years since then, but their influence is undeniable. (Their mark is so distinct, anyone that even attempts to play DJ on a guitar over rap-rock is labeled an automatic copycat.) Despite Rage’s commitment to let sleeping dogs lie and not write new music, they did reunite in 2007 for a Coachella Festival performance, igniting a handful of years playing festivals and large performances until 2011, when they performed live for the last time at the L.A. Rising Festival. The reunited events were always hand-picked, and it never seemed to be about the money; Rage never had a hard time turning down paychecks if the show didn’t fit with their stance.

But why come back at all? Why then and there? The band would later admit they couldn’t morally sit back and let their potential influence and pulpit pass when Coachella was offered to them. So when the time came in 2007, they opted to use one of the most commercially-driven stages to stand on an unsilent platform and blast the political structure of the United States. A month after the performance, Tom Morello acknowledged the methodology behind reuniting, speaking with NME’s Adam Bychawski about why it was the right time:

“It occurred to all of us that the times were right to see if we can knock the Bush administration out in one fell swoop, and we hope to do that job well.”

If Coachella was the band’s reason for performing, Live at Finsbury Park is the people’s reason. RATM recently released the June 6, 2010 live performance on DVD, and the show’s very existence is a testament to the band’s belief in the power of the people to incite change. An introduction to the performance on the film, narrated by legendary emcee and Public Enemy Chuck D, tells the story of the grassroots movement that would lead to the concert’s inception, a free ticket event held in the 110-acre Finsbury Park in the London Borough of Haringey, England. In the United Kingdom, there’s an annual tradition, a competition to top the UK Singles Chart the week in which the Christmas holiday falls. The winners are referred to as “Christmas number ones,” and massive acts alongside novelty, Christmas-themed or charity songs are typically winners, dating back to the 1950s when the tradition unofficially began. The Beatles have won the accolade. Elvis. Pink Floyd. Whitney. The Spice Girls. 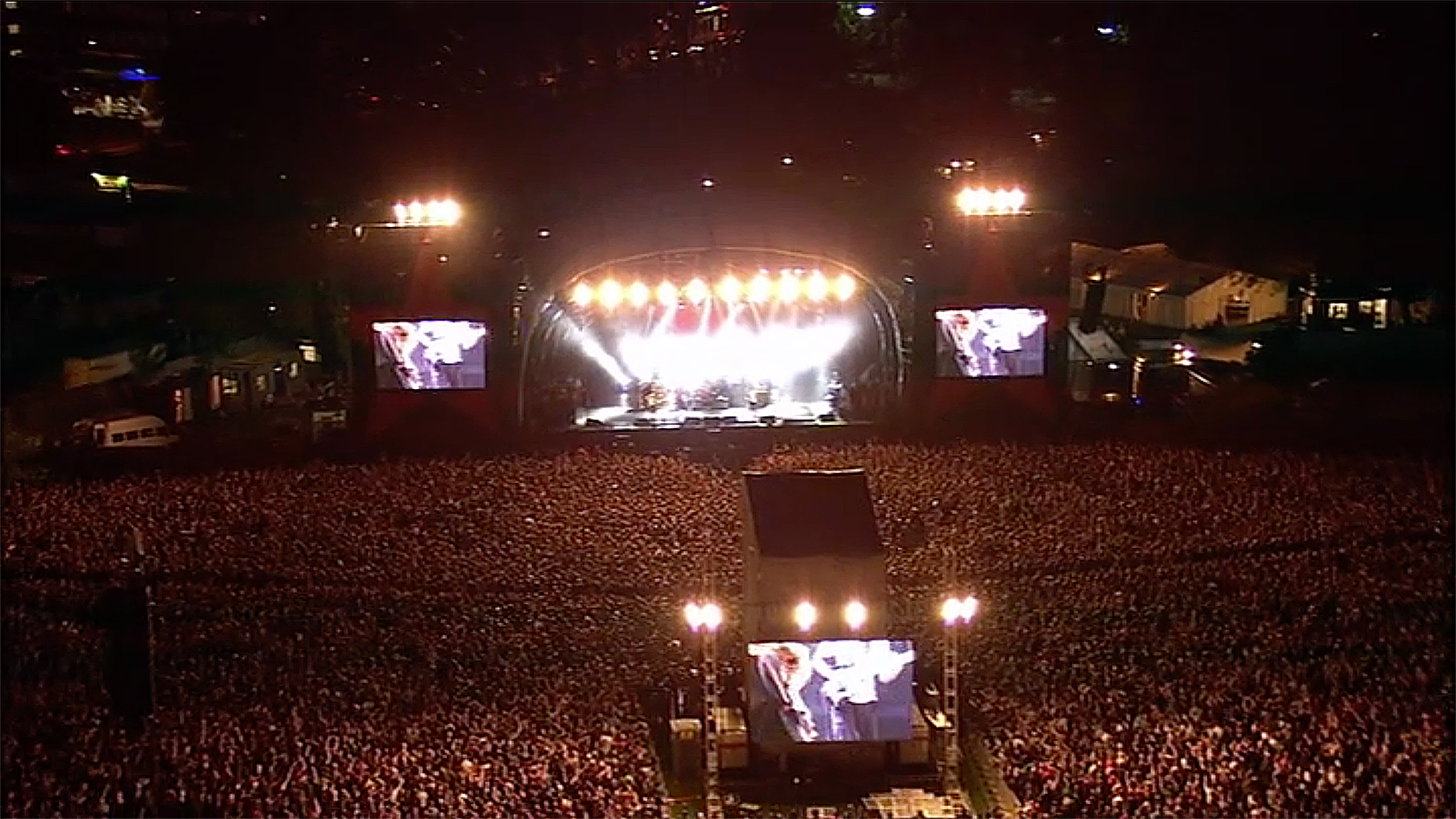 In 2005, a man named Shayne Ward won the second season of The X Factor, the U.K. equivalent of American Idol, and his rise to fame would also include grabbing the Christmas number one with “That’s My Goal.” It would turn out to be the first of four straight years of X Factor singles winning the popular tradition. But in 2009, an English DJ and his wife, Jon and Tracy Morter, had had enough and created a campaign to make the anthem “Killing in the Name” the Christmas number one, an effort to break the streak. The band supported the cause, promising a free concert if the campaign was successful, and — quite literally against all odds — the band’s single outsold X Factor winner Joe McElderry’s version of Miley Cyrus’ “The Climb,” selling 502,672 copies to McElderry’s 450,838.

Live at Finsbury Park is that free concert. The band would even go on to donate 100% of the profits of the sale of “Killing in the Name” to the homeless humanitarian effort, Shelter, presenting a six-figure check to the nonprofit during the show.

The thing I always loved about Zack de la Rocha was how poetic and deliberate he is with his words. On stage, de la Rocha wouldn’t mouth off or make small talk between songs; it was about the power of his lyrics and letting the band’s ferocity represent the lens through which they saw the world. He infamously started every concert with just a simple sentence: “We’re Rage Against the Machine from Los Angeles, California.” When I saw them perform in 1999, he didn’t say a single word between tracks until the break before their last song, when he spent his energy on sharing insight into the case of activist and journalist Mumia Abu-Jamal, convicted in 1982 for the 1981 murder of Philadelphia police officer Daniel Faulkner.

But on this particular night, the band seemed almost overwhelmed at the sheer support of the people, the people that had made them a part of history. It was almost that de la Rocha wanted to say more, but, true to his roots, opted to let the very moments speak for themselves. Guitarist Tom Morello would take the mic mid-set to hammer home the weight of why they were performing this particular concert, including introducing the Morters and thanking them for their help in making history. Not known for his smiles, de la Rocha would beam at points in the performance, staring out at tens of thousands of his supporters, the ones who were actively fulfilling the very truths he wrote about in his lyrics.

One of the best things about Rage is that it’s always been those four. It’s solidified their chemistry as watertight, their fervor and passion bubbling up and overflowing their cups, down over the monitors, over barricades and over security and on to every spectator. During this show, like most of their live shows, it would lead Morello to miss notes, to de la Rocha leaving out words. But it’s because Morello is throwing his guitar around like a weapon, present in the gravity of the moment. It’s because de la Rocha is animated to the point of breathless. These are the reasons you see bands live instead of just listening to the record again. They’re the freckles that make each performance unique, a place where, at any given moment, something special could happen.

Special it was. The performance is classic Rage Against the Machine, but, this time, the band and the people know their collective story is bigger than the tracks they’re playing — except for maybe one. Normally, the band would close every concert with “Freedom,” the bookend to their monumental self-titled album and also quite possibly the most charged eight minutes you can spend at a live concert. But, this time, it was different. They played all their jams, with one noticeably absent, looming in the background. As the night grew to a close and the last notes of “Freedom” rang off in the air, the band walked off stage. In the subsequent darkness, prominently displayed on the massive projectors next to the stage, quotes from Simon Cowell, Joe McElderry and oddsmakers appeared, reminding the crowd of how this moment was impossible: “RATM number one at Christmas?” The Guardian reported. “I can’t see it happening.” And before long, the echoes of the people singing along to “Killing in the Name” reminded the whole of London and those that watch the performance at Finsbury Park what people can do when they get together and say they’ve had enough. For Rage, it’s not about the song or the number one accolade. It’s about the power of the people to make the impossible a reality.

At the beginning of “Know Your Enemy,” there’s a cutaway to Zack de la Rocha where he’s smiling. The song was in the first half of the set, and it was almost like the magnitude of the very reason they were performing was setting in. “It was all y’all that made this happen,” he said to the crowd. “You are the weapon.” Immediately after, Morello launched into the infamous riff, ever etched into rock history. And, like an omen, de la Rocha raps his way through the first verse of the song, just like he’s been doing for decades: “Something must be done about vengeance, a badge and a gun.” He wrote those words in 1992, and it’s amazing how they’re the foreshadowing for what’s on the front page of our newspapers and websites to this very day. “Yes, I know my enemies … Compromise. Conformity. Assimilation…”