The Lebanon Valley Expo & Fairgrounds in Pennsylvania was the place to be tonight. It is the new location for the 16th annual Purple Door Festival. It was a beautiful summer evening, perfect conditions for some beautiful music. 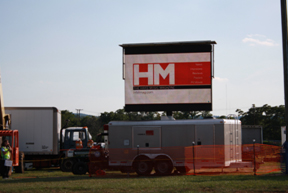 While the crowd was waiting for the first band to take the stage, they were entertained by HM’s newest commercial on the jumbotron. By the way, the commercials are pretty funny. If you haven’t seen them yet, make sure to check it out. 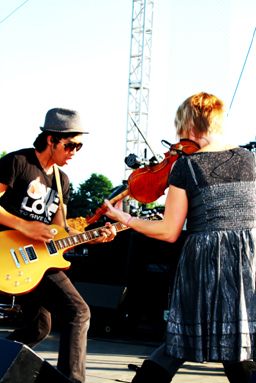 Pennsylvania band Reilly hit the main stage first with lots of energy. They did a great job of energizing the crowd with some violin rock! I must say, the dueling violins of Dan & Noele Huie add an intensity to their show that was quite impressive.

Meanwhile, over at the LBC stage the indie band The Historic took the stage. The band has a very creative storytelling ability that blends nicely with their folk sound giving them a musical maturity beyond their years.

Bands SisterBrother, Ocean Is Theory, and Yesterday is Waiting all put together solid performances on the LBC stage that the crowd really seemed to enjoy.

The alternative sounds of House of Heroes was heard next on the main stage, followed by a challenging message from Jon Acuff. Jon challenged us to clear the clutter in our lives so we can better focus our lives on Jesus. 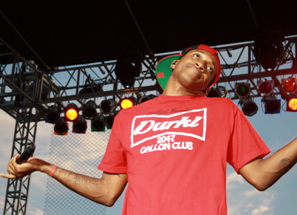 Lecrae and Tedashii hit the main stage for an incredible performance. These boys love Jesus and know the Word of God. The song Background set the stage for some spontaneous worship. It really was a beautiful moment in the presence of the Lord. 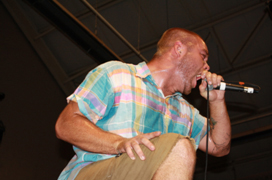 Lancaster, PA Metalcore band Texas in July tore up the LBC stage. The passionate vocals from Alex Good along with the high energy of the band kept the attention of the crowd. 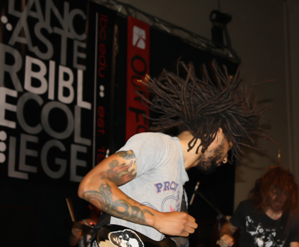 The Chariot closed out the evening on the LBC stage. All I can say is “Wow!”

They came out ready to deliver. If ever a band knows how to bring the crowd on the journey with them, it’s The Chariot. They delivered a non-stop intense show from start to finish and they really sounded great. It seemed the show ended so quickly! 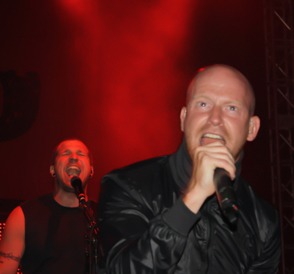 The anticipation of the crowd was high waiting for Red to take the stage. The restless crowd chanting, “Red, Red, Red, Red.” Finally the white cloth hiding the huge stage dropped, and the band took off delivering an incredible set. The crowd in unison bobbing their head back and forth with the rock grit look on their faces and their fists pumping. It was a good night of music, and much more to be had tomorrow. Until then…peace.