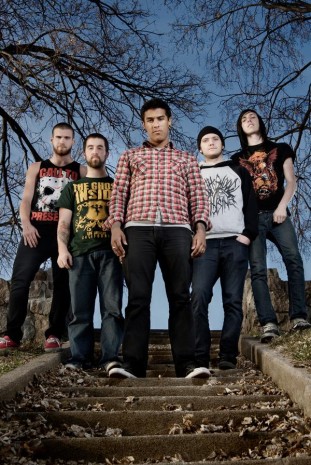 For Today Interview
Interviewed by: I, The Breather
Answered by: David Morrison (drummer)

You guys have had a very successful year, and toured all over the world. Tell us what it was like playing in foreign countries, were the people receptive to your music?
David: Thank you! We are extremely blessed and humbled daily to be able to do this. As I type this, I have flight confirmations sitting right next to me for our trip to Colombia in South America that we leave for tomorrow morning for 3 shows!

Overall, all of our experience in foreign countries has been really good. The kids know that we have come a long way when they come to our shows in other countries, so there is like an extra buzz of excitement & gratitude in the air at each foreign show for sure.

It’s also been really cool to see how people worship in different countries. In places like Latin America where the people may have less money and possessions as we do in North America, we’ve seen a much more pure form of worship as the love of Christ and desire to please him is literally all that some of these people have. It should be all that any of us have! Two of my most favorite shows of For Today’s career are foreign ones – Monterrey, Mexico and San Jose, Costa Rica.

What has inspired/influenced “For Today” to be the band/people they are?
David: Jesus Christ has definitely paved the way and laid out the instructions for all of us on how to compose ourselves as followers of Him.

Pretty insane, but the band actually started as a garage band 5 and a half years ago, and when we became a 5 piece not everyone was a Christian. Through prayer and Christ’s never failing Grace, we’ve all grown into our ministry together, which is preaching the truth of the Gospel wherever we go, and on whatever tour, every night.

How has the faith and religion aspect of this band affected the fan base that follows your band?
David: There are definitely people that have sent us messages or left us comments on our social networking sites that say things like “Love the music but I hate your Jesus lyrics”. It’s a bummer that they don’t like the lyrics, but it is a compliment to our band, when our goal is to spread the gospel to the globe!

There is also the other side of that spectrum where a lot of kids have told us that they’re able to use our CD’s and live shows as an outlet to worship God through. That’s humbling!

You guys are recording a new CD at the moment. What producer are you working with? And what we can expect from the new release?
David: Yeah! We just wrapped up the recording process about a week ago. We recorded the record with Will Putney at The Machine Shop in New Jersey. They’ve done all sorts of crazy records like Lamb of God, Chiodos, Haste the Day, etc… Will is an amazing producer and engineer and he had a lot of really cool ideas to tweak songs while recording. In the end, the record is better because of our time spent with him.

We have definitely progressed as musicians over the years while doing this band, but the record still sounds like a For Today record. There is a sing-a-long in the song “Seraphim” which is the single that says “Take Your Flame, Ignite the World” and I hope it gets stuck in all of your heads forever!!

Very excited for everyone to hear it.

For Today will be one of the two headlining bands on this year’s “Scream the Prayer Tour,” you guys are veterans on this tour. How excited are you to be apart of this tour again, except headlining this time around?
David: Last year we were so overwhelmed with stage managers, tour managers, super early load-ins, super long shows, and short sets that we all felt like we were in over our heads a little bit! It was the biggest tour that we had done at the time, so as “veterans” of the Scream the Prayer tour and having done several other big tours since then, we have the advantage of knowing what to expect. We won’t be surprised when we come out of the tour getting like 3 hours of sleep a night, haha!! We are also HONORED and very excited to be co-headlining the tour with Maylene. Those dudes are awesome, and it will be cool to play a longer set of songs and not quite so early.

As a “first timer” on the “Scream the Prayer” tour, do you have any advice for me, or any of the other bands for our first time being apart of this tour?
David: Great question! I would say to just go with the flow. Being a festival tour, where every show is festival style, things can change at any moment.  You never know whose van will break down, or sometimes bands are split on different stages. It gets crazy!

Bible studies are being arranged to be held daily amongst the bands on the tour and I would really encourage you to be involved in that as it builds fellowship and unity.

What can kids expect to see/hear from “For Today” on tour this summer, any new songs?
David: Yes, we will be playing 2 new songs off of our new record “Breaker”.  The songs we’re playing are titled “Seraphim” & “Devastator”. Should be crushing.

We also have lined up some incredible production on the tour with really hi-tech lighting all pre-programmed to our set, and some other surprises! Be ready to worship too, because it will be going down.

When you’re not touring what are some of your favorite activities to do when you’re at home?
David: I’m a booking agent for bands, so I spend a lot of my free time and off time working with bands, agents, & managers on tours and details. I also love to travel. So if the band gets a break and it can make sense with the workload – I love to take an adventure vacation out of the country doing wild things like whitewater rafting, skydiving, mountain biking, backpacking, & camping!

What’s the craziest thing a fan has ever done for you guys?
David: I think we have a photo album right now of over 100 For Today inspired tattoos! To me, that’s pretty crazy aside from honoring.

I have also seen a couple For Today license plates at shows, cars with For Today stuff scribbled all over them, people have spray painted entire walls with the band name and album artwork. There is probably more that isn’t coming to mind right now, but we have really awesome fans for sure!

Are there any big plans on “For Today’s” Itinerary after Scream the Prayer?
David: YES!! Our new album “Breaker” will be released just a couple weeks after Scream the Prayer in stores everywhere!!! Right after the album comes out we are doing a really big tour this fall with some great bands, but I cannot announce what tour or bands will be on it yet. Keep your eyes peeled to our Facebook & Myspace for that news soon as well as Overseas touring this Fall & Winter!!