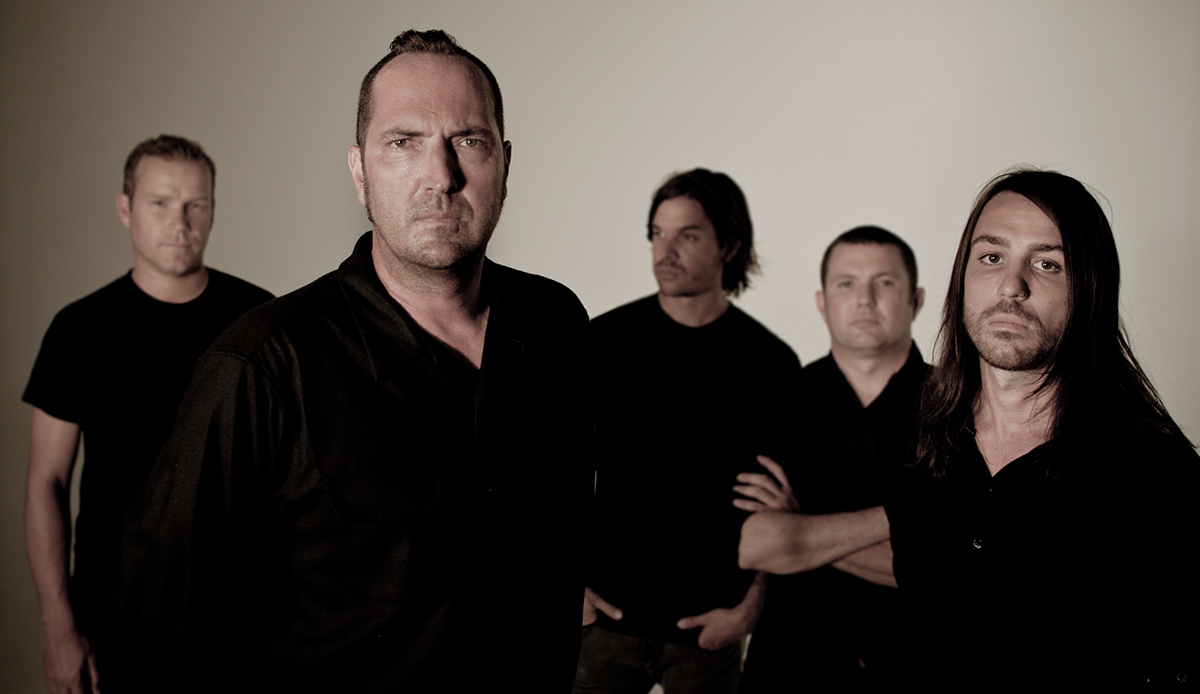 War All the Time

Why Jon Bunch and Brad Lehmann started War generation and made a record paying homage to their punk forefathers.

War Generation is a band made up of two friends: Jon Bunch, previously in Further Seems Forever and Sense Field, and Brad Lehmann of Maylene and the Sons of Disaster. Both guys are no stranger to success; FSF was a cornerstone of the emo movement in the 2000s, and Maylene is still a great touring band.

But for until now, the two friends hadn’t linked up to play music. Every good story has a beginning, so I asked Bunch how their friendship began.

“Brad and I have been friends for a really long time,” Bunch says, “ever since I was singing for Further Seems Forever. We always stayed in touch. He road manages for bands, so when he would come to town, we would always hang out. Then he started playing for Maylene and the Sons of Disaster. I was working on some music and one day I asked him what he had been up to. He told me he was writing some music that didn’t fit the Maylene style. I told him to send me over some music.”

And so began the roots of what would be War Generation. They would pass parts back and forth, criticizing and refining and always pushing for more, noticing they had a good thing going. “Once I got the music, I recorded some vocal parts and sent them back to him. He would send me a song and I would work on it. Then I would send it back, and say, ‘Send me another one.’ After a while, we had a handful of song, and we realized that we had something going. So we pushed each other to get more done.”

Lehmann chimes in. “We had a full catalog of songs before we even started recording,” he said. “I have been in a lot of music projects, but the great thing about Jon is that he sends (the music) back with a completed thought, with a vocal melody, and lyrics, which is nice for a guitar player. I don’t have to question what he does. It was all very organic, and happened in very nice way.”

Unlike a number of the one-man bands that are starting to enter the rock realm, War Generation didn’t have any intention to record alone. I was wondering who was going to fill in the gaps in the studio, and it only makes sense that a couple more friends would jump in and help out.

“We got Craig (Anderson) from Ignite to record drums,” Bunch said. Lehmann recorded the bass in the closet at his house, then flew to St. Petersburg, Florida to record the rest. “Then we went to Paper Sounds Studio and recorded the vocals and guitars with Stephen Bowman, who is a really good friend of mine,” Lehmann added. “Between the three of Stephen, Jon, and myself, it was very easy going (in the studio).”

Even though there’s some star power in the band, it felt like there wasn’t the larger, immediate following I expected. “We are starting over from scratch,” Bunch said. “We are a brand new band, no matter how popular the projects we were a part of in the past.”

Plus, Lehmann was bound by pen and ink. “I couldn’t say anything online until Maylene was out of our contracts and we free agents.” Lehmann added.

That is why their label, Rise Records, announced the band just two months before their debut record Start Somewhere Never Surrender was set to come out.

Rise Records does a good job of keeping a varied roster so you never know who they’re going to sign next. That’s how I felt with War Generation. With all the friends Bunch must have, I thought the band would have signed with an Epitaph or a Revelation. But, as Bunch said, he likes to keep it close to his heart.

“(Rise Records founder) Craig (Ericson) has been a fan of my music since I was in my first band in high school, Reason to Believe,” Bunch said. “He even saw Sense Field before we had a record deal. He told me right as Brad and I started working on this new project that he wanted to put out a record by me.”

Bunch and Lehmann weren’t even thinking about labels. The whole goal was just to make some music between friends. “We weren’t wanting to get signed at the time,” Bunch said. “As songs formed and we realized we had something a label might want, I talked to Craig about what was going on with Brad and myself. It is rare to find someone who has … followed everything you’ve done from the beginning of your music career.”

But, most importantly, Bunch knew he could invest in Rise because they’d have the band’s back. “I have a lot of trust in Craig,” Bunch said. “I knew he would have my best intentions at heart. I think it’s a blessing that you have someone who cares enough about your music to put it out.”

Most bands these days record their album on their own before getting signed. War Generation is no different. “We recorded the record with our own money,” Bunch told me. “Maylene was off at the time, and I did some road work and put that money into recording this record. I have recorded with a $40,000 budget, and at the end of the day, you are leaving the album in someone else’s hands you don’t really know, who can’t capture your vision. If we can spend our own money, we can do it our way, and our vision is captured the way want.”

Rise is one of the few independent record labels that can financially support a band like War Generation. They’ve gotten behind some great bands like The Devil Wears Prada, Face to Face, The Bouncing Souls, and even Further Seems Forever from Bunch’s earlier days. The label signs something for everyone. But even though Bunch and Ericson have a history, things are a little bit different from when Rise was supporting FSF.

To me, “war generation” captures the natural melodic punk hardcore sound that I grow up with when I was in high school in the late ’90s. It’s an aggressive band name for a first impression. I wanted to know what they were imagining when they came up with the concept and name for the band. “When we were writing songs and coming up with ideas,” Bunch said, “I was thinking about the punk rock scene I was from in the ’80s. I consider it a war generation, in a weird way, with all the things the punk kids had to go through.

“I was lucky to be able to work with a guy like Brad,” Bunch continued. “He wrote all the songs, but let me do what I wanted with them. It is rare to find someone to work and write songs with where you really love the songs. I feel really lucky that we connected during the songwriting process when we did. (It) was really easy compared to previous music projects I’ve been in.”

Working with someone on a new music project can be nerve racking because you never know how if other party will complement your vision. Lehmann, the songwriter, was doing a masterful job writing for Maylene and then bouncing styles over to War Generation. What would happen when Bunch got involved? For Lehmann, it turned out to not only be a beneficial pairing, but Bunch was able to take his songs and turn them up a notch. “It’s nice to write music and send it to someone, have them put vocals and melody on it, and when you get the song back they’ve taken it to a whole new level and kill it. … Sometimes it comes back parallel or worse, but with Jon it’s always better. He never blew it.

“It’s been great writing songs with Jon one-on-one compared to writing with a band,” Lehmann continued. “I come from a new school punk sound, bands like NOFX and Alkaline Trio. Jon comes from a punk era 10 years prior to that. So we overlap the old school and new school punk sounds. I throw in some Southern riffs as well. Though, if you listen closely, you can hear that they are all punked-out Tom Petty songs.”

To understand the music is to understand them. Like most youth, the music that got them through life influenced the style they play now. You can hear that in their music. “I grew up in the south bay of Los Angeles where all those groundbreaking punk bands were from,” Bunch said. “My first band’s practice space was at The Descendants’ headquarters. My friends and I were all influenced by Black Flag, The Minutemen, Firehose and all the other bands from that area. When you grow up in that, the blueprint is ingrained in you, so the music you hear on this record is the only music I know how to write.”

War Generation wants to pay tribute to those bands that paved the way before them. “This record pays homage to the bands I grew up with — to the times I spent going to shows and playing records from all these L.A. punk bands for the first time — just remembering the time of my youth and capturing that passion and energy on one record.”
Trends exist for a reason — a lot of people like them enough to jump on them — but that doesn’t mean them people embracing them know anything about them. War Generation sticks to what they know, and it’s not a style of music you hear much right now. As Bunch said, it’s ingrained in him. His writing is more about what he knows than what’s hot.

“I am not here to be cool or compete with a younger band,” he said. “I am 43-years-old. I just want to put out music and try to have fun with it. With Sense Field, we took it so seriously, wanting to be a success, we put a lot of work into the band, which took all the fun out of actually being in a band. We did not get to enjoy a lot of the experiences because we were always under so much pressure to try keep the band in the public eye. Right now I just want to write music with Brad, put out records and tour. I just hope the younger kids like what we worked so hard on.”

War Generation was posted on September 5, 2013 for HM Magazine and authored by Rob Houston.