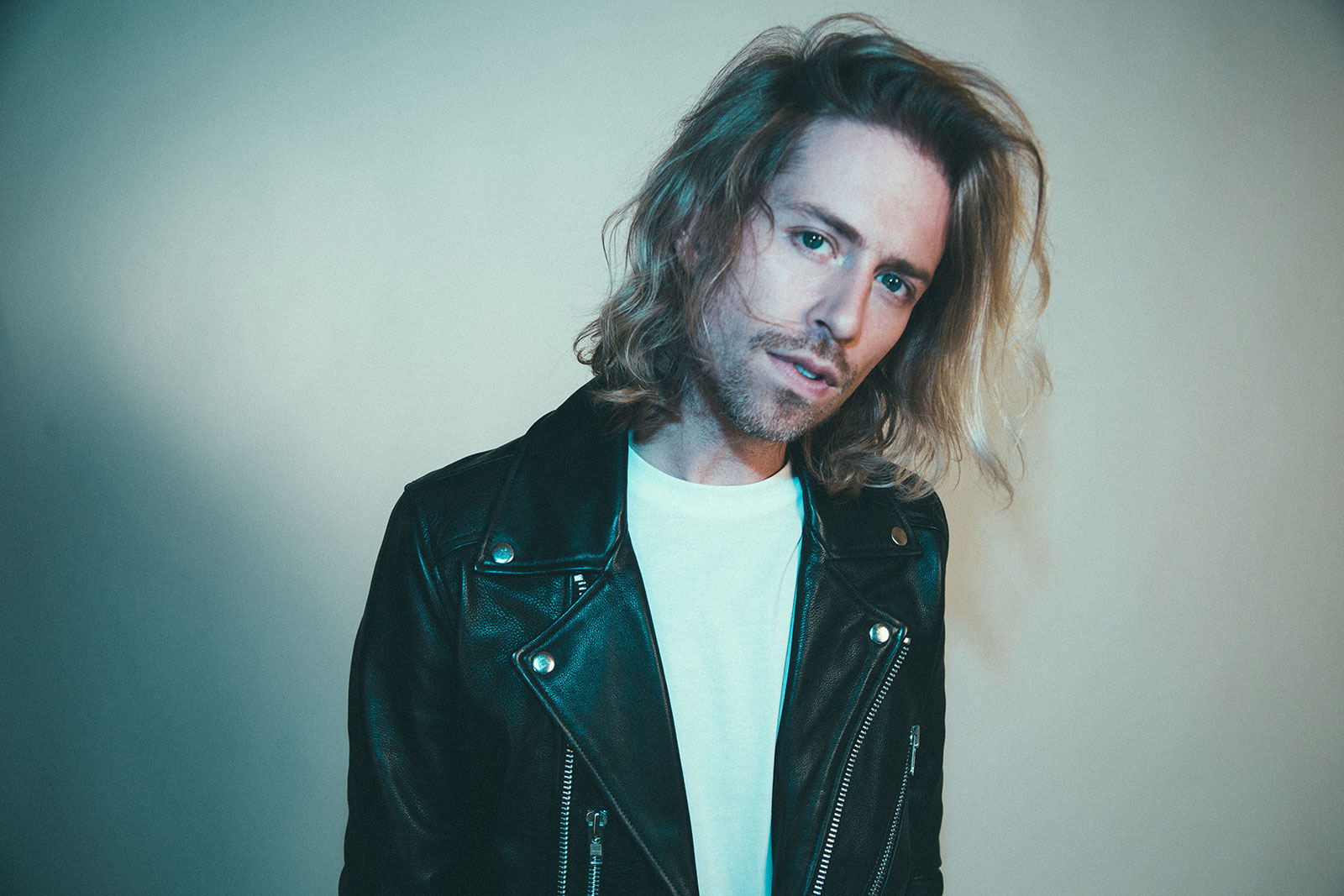 Bryce Avary, known musically as The Rocket Summer, believes in the power of music: "I think music can be, in the most literal sense, a life-saving tool. In your darkest hour, it can convince you to keep going instead of ending it."

Bryce Avary is the kind of artist you could talk to for hours. Effortlessly gracious and kind, the 33 year old lives and breathes music, identifying with the drifts and drags of every note that explodes from his fingertips. He sits relaxed in his touring RV, a stack of recently bought Powells Books occupying the table between us while members of his crew come and go. Avary’s new self-released record, Zoetic, has been receiving some of the highest praise of his career, and though Portland has downgraded his venue this evening, the man known as The Rocket Summer can’t help but smile through it all.

Our chat is rushed at its end as the show he is about to play is running early and his set time is approaching. The Hawthorne Theater houses a more intimate interaction tonight, squeezing in The Rocket Summer’s setup of two drum kits in addition to the standard gear. Avary’s energy knows no bounds, evidenced by later bloodying himself while performing. The crowd rushes to buy up souvenirs from the evening, but Avary realizes he needs to make plans to stitch up his right eye before hitting the road. “I always knew his music was great, but it was like we could see his soul up there on stage tonight,” one fan explains to another in the parking lot. The intimacy of his performances is impossible to shake, and with a new record that will no doubt be labeled his boldest, Zoetic’s bravery will go down in history.

Zoetic is so different.
I feel the same way. Like, what is this? That’s why I’m really proud of it. I’m proud of Do You Feel and Of Men and Angels and all the albums, but this one to me is the only one where it’s just its own thing. There’s nothing wrong with just trying to write good pop songs, but I was just trying to follow anything that was coming out and thinking, “How can I make this interesting?”

Do you feel like you have a formula for finding inspiration? Is it a calculated process?
I’m just always trying to write. I’m just always inspired to write music. I’m inspired by these fans and that just keeps me going. The community that we have is something I don’t take for granted. Music is like oxygen for me. It’s probably unhealthy, actually (laughs).

Are you the kind of musician who writes a song a day?
Not on the road. On this tour, I’ve probably come up with a few ideas but I’m always so busy it’s kind of tough. When I get off the road it’s like a cannon. Luckily, the inspiration has stayed. There are days where you have to be more, “Okay, I just have to write.” Music and melodies are sometimes easier for me than lyrics. Lyrics are like, “Okay, what is this about? I’ve got this cool progression, this cool riff, but what’s this song about?”

How does that writing pour out? You write a record, you tour it, you live and breathe it for a year or more, and then you have to think of what comes next. Does this make sense in my anthology? Does this fit?
Every record has been this natural progression. I never thought too much about trying to mess with it. With Men and Angels, I definitely set out to have this record with a more spiritually charged undertone. Even the tones on the record and chord structures, I wanted them to be a little more serious. Zoetic is the first record where I really just didn’t care. The only thing I cared about is that I didn’t care. What that means is I just wanted to make something really cool to me. It’s like a polarizing record because of it. It’s weird because it’s gotten the best reviews I’ve ever had. Night after night, guys will show up and be like, “Dude, this is my favorite record of yours,” and girls will be like, “I don’t know… Where are the sweet songs?” (laughs). But it’s been great overall.

Do you see that as a “maturing” process, maybe?
I just think that hopefully I’ll be making records for years to come and it’s just another piece of it.

It’d be easy to get stuck in that. I’m sure kids request songs you wrote when you were 16, but now, at 33, that may feel a little odd.
I don’t play too many songs from then. Probably the oldest songs I’ll play is something from when I was 18 or 19 from Calendar Days, but I certainly would never turn my back on why people are in the room in the first place. Some people are there for the new record and some are there for the old stuff. I’m just grateful to play music.

I’m so proud of all the albums and the community that was birthed from those albums. I love playing all of it. Obviously, it’s a little more fun as an artist to play fresh things, but it’s really fun to play a song that everyone in the room is singing along to, whether or not it’s new or old.

You’ve said that Zoetic was largely influenced by nature. Can you expand on that idea?
I definitely went through a thing, for better or worse. I went through a lot of songs, and I was perhaps even convinced I was doing something on the side. I wasn’t going to end Rocket Summer by any means, but some of the stuff got really heavy and weird and I thought maybe some of this stuff should be something else, just to kind of keep the brand.

It’s interesting to look at someone like Andrew McMahon where one could argue the difference between Jack’s Mannequin and Andrew McMahon’s “solo” stuff.
You go through those things like, “What do you do to progress?” There are a lot of people who have hit a wall of some kind, but I don’t think I need to do that. At the same time, if there is anything I’ve learned from Justin Bieber, it’s to never say never.

You’ve always been known for your positivity. Do you feel like you have to maintain that image or thread nowadays?
I think there are plenty of songs that aren’t super positive. I feel like somehow a lot of the singles have been these really catchy happy songs, so I get pegged with this impossible and inaccurate positive person thing. It actually sucks because when you have that reputation but then you’re normal, it almost carries more weight. I feel like I write plenty of honest songs.

Does it feel like an obligation to stay positive?
I don’t really view my art as Christian art in terms of the marketplace. We’ve never been a part of the Christian music scene.

You never even did Cornerstone, right?
Even when we tried, it wasn’t open to us. In my life, it is a huge part. I should say it’s the biggest thing in my life, but sometimes it’s not. Ultimately, I know it’s the biggest thing in my life and I need to seek the Lord all the time. I do think that I search for that joy that I believe we have in Christ. I do think there is a point or obligation of just trying to make the right decisions. Not to say that I’m not a normal person and have bad days and say the wrong thing sometimes. I would never look down on someone swearing in their art. There’s probably times where I think, “If I could just say that…” (laughs).

But it’s probably not worth the backlash.
It’s not even the backlash. I do want to put out something into the world that could get replayed potentially hundreds of thousands of times. I have to be accountable for that, but at the same time, art is just expressing yourself. I’m kind of just whatever about it.

You said lyrics can be the hardest part. When you’ve written the music, does that tend to dictate the tone of the lyrics?
The last song on Zoetic is really alive sounding, really poppy sounding, but it’s about being on a flight and someone passing away in the middle of the flight. It’s a really dark subject. I almost don’t like explaining some of these. There is a song called “Sharks” on the record that has this chorus that says, “Why would I want to go back? Why would I want to go back in time or to tomorrow when I can just take in today?” It’s this really positive thing, but it’s actually about a friend of mine who got his heart ripped out by this guy, like stealing his fiancée and marrying her. It’s about being devastated and not knowing what to do.

I had to do this thing where I explained every song in this interview, and you could see people just reacting like “…oh?” (laughs). Art is supposed to make you feel a certain way, and the best kind of art is the kind that doesn’t have to fully spell it out for you but takes you to this place where you have your own moment with the song in your life. A lot of times, when I’m writing songs, it’ll be like I’m sitting at a piano or playing the guitar and I’ll start playing something. Really frequently a phrase will come out, like what the song is trying to tell me to say, then I’ll write the whole song around that one line. That happens nine times out of ten. It’s really rare that I just have a story on paper.

Do they have to be based on something true?
No, definitely not. I generally write a lot of songs that are autobiographical. Again, it just goes back to that whole “going on a journey” thing and having art take you somewhere.

Have you ever had bouts with writer’s block?
Yeah. There’s a song on the record called “White Fireworks” which is essentially about writer’s block. I read a lot of poetry and that gets the juices flowing. Ultimately, if I don’t know what to sing about, I do go to the creator of creativity. A lot of times I feel like that helps. Sometimes you just write a song about writer’s block. It’s about trying to find feeling in lyrics, “Empty cups and empathizing / empty pages emphasize the emptiness / I want to feel alive / When white fireworks erupt and my heart is whole again / senses ablaze, the oceans roaring.” It’s writing about wishing I could write (laughs). “Patterns in the floor have me absorbed / I make out faces in the doors / popcorn texture ceiling / my thoughts demeaning / too many feelings / but never words.” It’s just writing about being frustrated about writing.

What is it about your music that you think fans grab onto so much?
It always just blows my mind that anyone is listening. The common theme, I guess, is that I think there’s a lot of life in the music. It’s not all super highly emotional sentiment throughout the songs, but I think there is a common thread of hope that lives in the records that is powerful. I think music can be, in the most literal sense, a life-saving tool. In your darkest hour, it can convince you to keep going instead of ending it. Plenty of bands have those stories. I feel like God is in music.

Rocked a little too hard in Portland tonight. Doc already stitched me up so I'll see you tomorrow, Seattle. ??

The Rocket Summer was posted on May 27, 2016 for HM Magazine and authored by Jameson Ketchum.