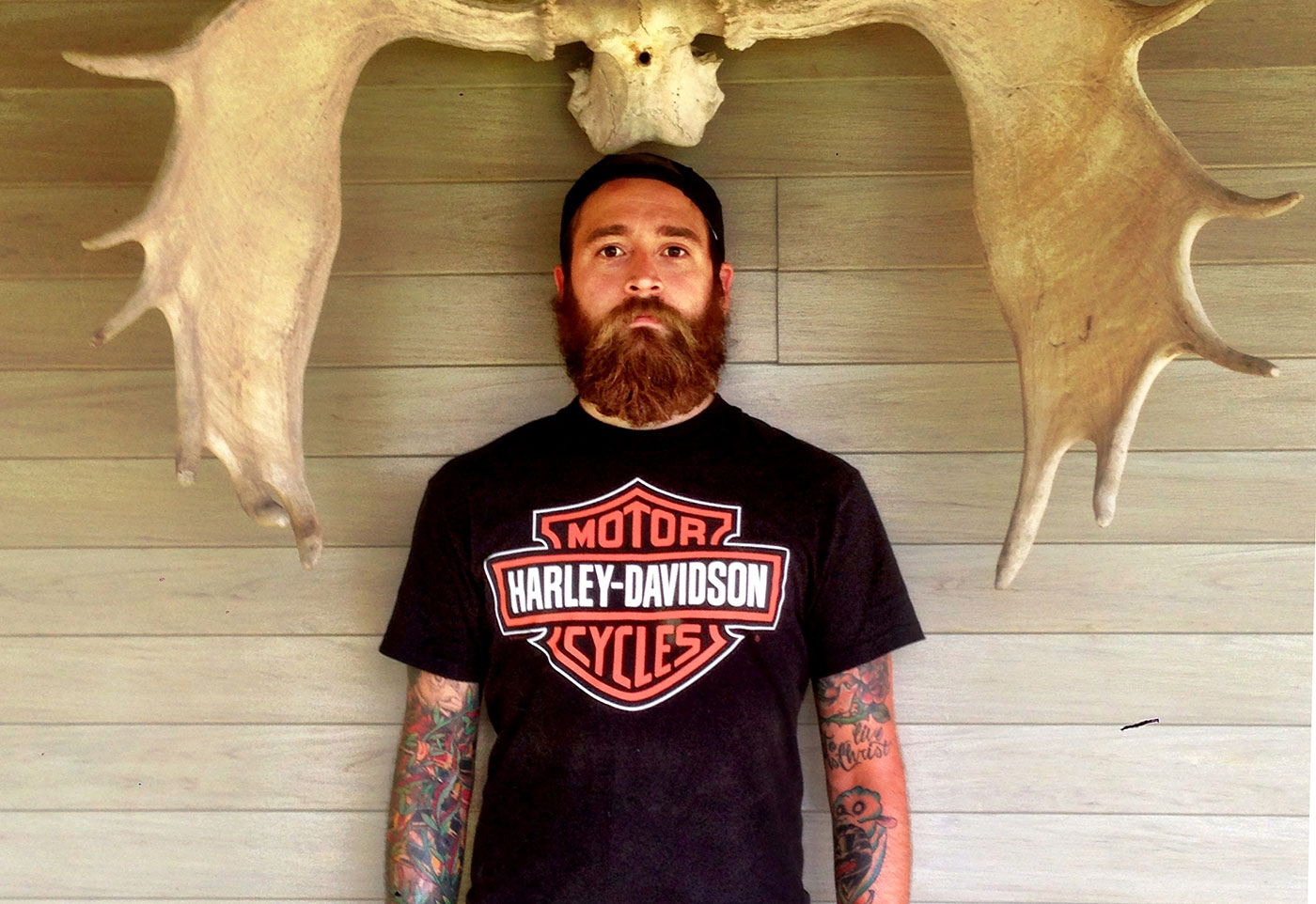 When I first found out I would be interviewing former A Plea for Purging guitarist Blake Martin, I went to YouTube, searched for his former band, and my first impression of them was their “Malevolence” music video. I remembered watching this video years ago with a big grin on my face, laughing at how ridiculous the video was. Plea always struck me as a band that had fun with their work and seemed to want their fans to have fun, too.

Martin, previously the mastermind behind Plea, has kept busy since the band played their final show in 2012. He married his bride, bought a house in Nashville, started working at a local brewery and, before too long, began his solo music project.

Martin had a friendly accent (I grew up in Canada), and his personality made our conversation light and positive. (This magazine’s editor is a good friend of Martin’s, and I got a firsthand experience of their amusement of work, feeling old and the nostalgia surrounding Plea’s legend.) Martin is someone who counts his blessings; he is always thankful for what his past experiences taught him and applying it to the future. When I told him I used to watch the band’s old music videos he said, flat out, “I’m sorry. That’s all I have to say.”

What have you been up to since the end of A Plea for Purging?
We had our last show in the fall of 2012, which is kind of crazy to me that it’s been so long already. We — all the guys in the band — were in the process of settling down as opposed to life on the road, which is what we were used to for the past seven years before that. I was engaged, and I had bought a house in Nashville, preparing to settle down with my soon-to-be wife. We got married in October of last year, and I started working at a brewery called Yazoo in downtown Nashville — and that was kind of a dream job for me coming out of the band because it’s kind of hard having a seven year gap on a resume and then trying to get a job. The only experience I had was being in a band and traveling, right out of college. So, long story short, I settled down with my wife and started working full time. Life is good. Being home was kind of the new and exciting thing. We all (the band) settled in and got jobs. Two of us are married, Aaron is going to be married this fall, too, and Andy’s really serious with his girlfriend. We’re all ready to be around females because we’ve been around guys a lot.

It’s nice that you all reached that point at the same time!
Yeah, we’re all on the same page. We were very fortunate as a band to leave — not only amicably — but also by choice. Everyone was excited about the next page in our lives. We’re all still brothers and really good friends. We talk often. I still hang out with Aaron. Andy and John moved out of Nashville, so we don’t get to see each other as much as we’d like, but those are some of the best friends I’ve ever had. Love those dudes.

Tell us a bit about your new project. How would you describe the sound of your new EP?
My current EP is definitely electronically based. I had an EP I released two years ago that was an acoustic EP, kind of “singer/songwriter,” really simple guitar and vocals. But with this newer one, I wanted to try my hand at more electronic, looped, more ambient kind of stuff. I got into Radiohead years ago, and I think that set the stage for experimenting with electronic sounds. Since then, I’ve been into Portishead and Massive Attack. I’ve gotten obsessed with it over the last few years.

I started playing around in my little project studio at the house with demos, and a few months ago I finally realized I had about five or six songs that were near completion. I made a commitment to finish it up and try and release something, so this is kind of an experiment for me. I definitely think a lot of people won’t get it, especially at first listen — and especially if they were fans of Plea or of my last EP — because it’s so different from what I’ve ever put out. On A Plea for Purging’s last CD we ever did, I got to experiment a little more with looping and electronic beats within some of our songs, and that set the stage for me to keep going. Hopefully it evokes more of a feeling or a mood (as opposed to) songs with classic structures.

How has the transition been switching from a metalcore band to now, mixing your own music with a completely different sound?
I did the majority of songwriting in Plea, so I was already used to getting the songwriting process going before I brought it to a group. That came pretty naturally to me since I was already used to that, but stylistically, when you’re in a metal band for seven years and you’ve toured as much as we did — all you hear is metal for hours and hours a day, every day on tour, for years on end… After a few years of being in a band, we all started to find different styles of music we liked because we were trying to get away from metal when we were in the van. I like doing stuff solo; it’s just fun for me. It’s a release for me to get home from work, go to my little project studio, sit for a few hours and write. It’s kind of therapeutic for me, I guess.

For sure. Like you said before, you want to create an experience with your music. Do you feel like making your own music allows you to express things you couldn’t while you were in a band?
I think so; at least lyrically. Andy, the screamer of Plea, would write the book of lyrics so it pretty much came from his perspective. Now I’m writing all the lyrics, so naturally it’s going to be more from a personal perspective. I don’t have anyone looking over my shoulder telling me if they’re comfortable or not with something. I can do what I want to do and say what I want to say, which is refreshing. I’m a believer, but I also struggle like anybody else, any other human being.

I definitely feel like I have a little more freedom because I don’t have three other guys to run things by, which is a good and a bad thing. I can definitely say it’s a lot more personal.
Stylistically, too. I can put out an acoustic record and then two years later, I’ll do an electronic record just because I want to. This isn’t my main source of income, so I can just do want I want — I love that! I’m doing it because I love it and I wanted to try it and I’ve got nothing to lose. That’s a pretty cool feeling, too.

To me, it seems as if technology and its accessibility has made it easier for people to compose their own music from the comfort of their home. Since so many people are now sharing their music online, daily, where do you see yourself fit in all of this? Do you think it’s a challenge to be original?
From my personal experience, I get into trouble when I start trying to be creative. I just do what sounds right to me in the music, and usually that comes out sounding unique and I like that. I do have influences, for sure … but I didn’t sit down and think about being different and crazy and off-the-wall to be unique.

Touching on what you said about technology and things being more accessible and easier, I see myself absolutely taking advantage of that. I’m into that because being able to get your own music on iTunes, Spotify and Amazon — that’s huge. The whole music industry landscape, which has been well documented, is all changing. Artists are now taking control of their catalogue, distribution, recording and engineering of their own music. I think it’s so cool that the music industry and the means to make your own music are more affordable than ever.

It makes it easier for younger people who don’t have the means to go to music school or buy instruments; it’s great they can now express themselves through music in a digital way.
Oh, sure. I’ve got friends who made bedroom studios into full-on careers. For me, I can afford to have a small studio in my house, put out my own records and get them online on iTunes. It’s just insane to me. Nobody would have dreamed about that 20 years ago.

What do you think the future of music looks like?
I hesitate to even guess because I’m not as involved with the music industry as I was four years ago, (when I was) on a record label and having distribution, budget, music videos, etc. I feel like I’m maybe the old guy that’s out of touch more than I used to be (laughs). By observing it the past year or two, it’s so cool to see artists taking control of their own work and the way it’s presented. I think we’re going see more and more of that, to where labels are going to be forced to adjust or at least embrace that kind of technology or opportunity for their artists. I think you’ll see a long road of them trying to stop the bleeding, as far as online downloading and torrenting. In the end, I think it’s really cool to see a shake up in the industry. I’m interested to see what kinds of changes happen, and I think we’ll both be surprised and excited about it.

Have you considered getting back together as a band for a show?
The thing is, the last show we played was to a sold-out crowd in the main stage room of Rocketown. Family and friends came out, and we had legendary Nashville bands that had previously broken up get back together to play at our last show. It was the most fun show I’ve ever played. For us, to think about playing another show after that, it would have to be somehow bigger and more exciting for us to go out on. For me, personally, I told the guys in the band the only thing I can imagine being cooler than that to go out on is to play in Japan. So if we could get a show in Japan, I’m going to Japan! That’s condition number one. And then Andy chimes in our conversation and he was like, well, if somebody gave us something ridiculous that we didn’t deserve — like $10,000 (laughs)… Maybe we could play it. So I said no one in their right mind would ever pay us that much money to play. Then he said, “Well, then. We’ll never play a show again” (laughs).

Those are two brutal conditions!
You think that’s funny? We were joking around the other day and thinking we really can’t imagine relearning those songs. Seriously, my hip may give out at this point; I feel twice as old as what I look like in those pictures of me from five years ago. If we played again, it would be something to watch.

RYNBLKMRTN was posted on June 3, 2014 for HM Magazine and authored by Sarah Dos Santos.