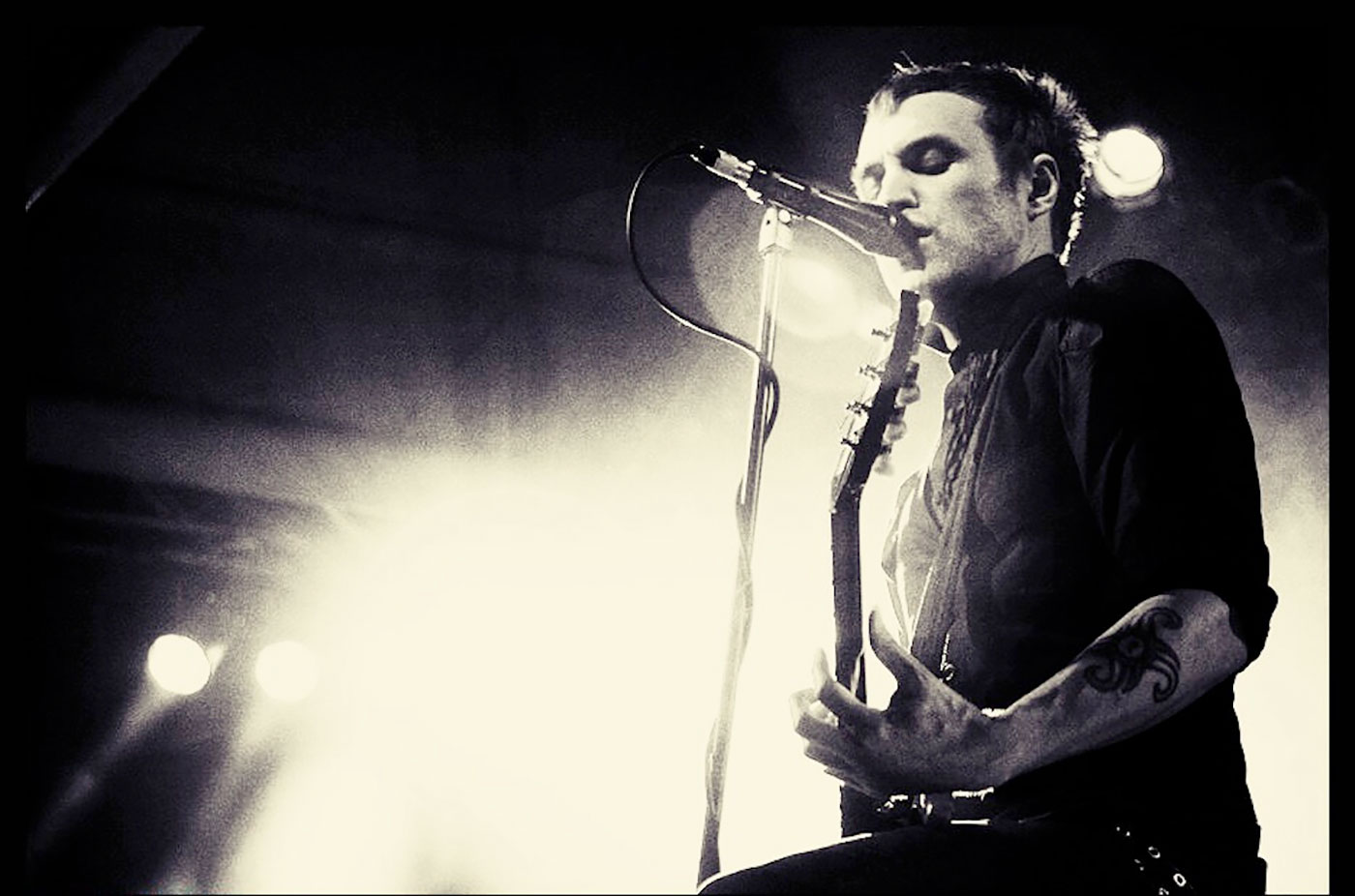 Tell me a little bit about when you decided to go horror with this thing. How do you incorporate that film genre into your stage show?
I kind of just started one day (laughs).My father was in the symphony. I was raised by a symphony player and an orchestra trumpet player. He was the second youngest guy to be in the Vancouver Symphony Orchestra. Ever since I was a kid, I was around all these macabre sounds. All those Gregorian chants. I’d get dropped off because there was nowhere for me to go. I had to watch Mahler’s Third Symphony and watch them rehearse that. The whole thing is just dark, morose sounds.

So naturally, I started a band. I was from a small town and had zero friends. I went out and came up with band figuring it was exactly the same as everybody else’s. Right away, people started saying to me, “You’re horror punk.” What the hell is horror punk? I didn’t know what horror punk was. Other people said it was vamp rock. I was like, “Man, all I am is a guy with a guitar. I don’t know what you guys are talking about.”

For everybody who doesn’t know, you’re in the band with your brothers. Did that play into the whole idea of the band and its genesis?
It was me by myself, and I would just get people to play with me at first. Then my brothers joined when they started going, “Hey, cool. You’re getting shows. People are going to see this band.” As each guy was secretly killed off and buried somewhere, they would join.

It ended up being three brothers after a while. Then we got into the music business. The real horror was our introduction to the business side of music. That was really where the most horror came from (laughs).

I wrote a lot of really bizarre lyrics, mostly because I think I’m mentally ill. I like reading a lot of weird stuff, and it ends up in the songs.

I guess we ended up writing horror punk.

He makes you want to stop writing.
(Laughs) Yes.

It’s like, “I can’t do this.”
I come out to Chapter 14. When we come out to play, my new introduction is literally the audiobook for Chapter 14 of Blood Meridian.

For me, I never tried to be a horror punk singer or songwriter. I was writing songs that just sounded like that, trying to make my own artistic statement. The next thing you know you’re considered horror. It was fun because I ended up getting thrown in with all these bands that sounded nothing like my band, but I loved them all.

Like when I was on Fiendforce Records — they’re in Germany — they went and found all the horror punk in the world and put them all on one bill. They’d have these traveling tours where you’d have, like, four bands and everybody is from a different country. The shows would be totally awesome. We played with a band from France, a band from Texas, a band from Canada and a German one. A lot of my long-term friends in music have been from those bands. All of those bands are from different pockets, flying that flag. Everybody has the same story: “I never really set out to be this. I just kind of got stuck here.” Now here we all are.

It’s better than being stuck at home, right? It could be that.
Yeah, it is. I don’t mean stuck that way. I mean more like you’re just from all these pockets of the world and somebody says to you, “Hey, you over here doing this weird sound, you’re horror punk. Go play in this tour.”

If you’re not horror punk, you’re still into horror movies, right? Because that’s what I’m here for.
Yeah, totally. I love horror punk. Don’t get me wrong. I just didn’t set out to be horror punk. Somebody came up and said, “Hey, by the way, I don’t know if you know this…”

I want to get some of your favorite horror movies. I guess this is one of those labors of love. I’m always curious to talk to people about horror movies.
It seems like everybody that’s categorized something as horror stems from keeping it an outsider mentality. I loved horror movies right from the get go.

Before I talk about what horror movies, I love the fact that anybody with any kind of budget can do it. You still have a market just by being creative. I don’t think there’s any other movie genre where an audience will really give a movie a chance no matter what the budget is. I have another band called The Vincent Black Shadow that had a lot of good years of playing. … We started the same way. You have a shoestring budget. You’re doing tours with shoestring budgets. You’re making it work because you have a creative side that’s appealing to people.

I love horror movies for that. I’ll watch any kind of low budget movie. My favorite ones are the original zombie movies. I love all the remakes. I love the spirit. How do you think George Romero must feel right now? I hope he’s getting some residuals on all that stuff.

The barrier for entry is super low. You can make a low budget horror movie and people can love it.
I don’t think those guys know how to protect their intellectual property. Then somebody comes along and goes, “That’s a great idea. Let’s do a soap-opera, super-watered down version we can play anywhere and any person can swallow it.” Boom, The Walking Dead. I love The Walking Dead, but, at the same time, I wonder what George Romero thinks. “I couldn’t get anybody to pay attention for sh-t when I wanted to do zombie movies.”

Now, it’s on AMC.
Yeah. Now, it’s on AMC, exactly. The story of me and my brothers was the exact same thing. We’d be asking people to listen to this stuff. We were raised by a symphony musician. We’re three brothers. We’ve got tons of fans saying they love it. Can you guys just check this out? We couldn’t get arrested with it. People wouldn’t give us the time of the fking day. We just decided, “Fk you. We’re going to soldier on ourselves.” We started finding likeminded people. That’s how I ended up with my manager. When we pulled up at his house, I knew right away we were with the right person. You walk into his house and he’s got a Nightmare Before Christmas room. He has, like, a 101 Dalmatians life-size exhibit in his house. He could have every horror movie you could think of.
But as far as movies go, I don’t know if it’s considered horror movie, but I love stuff that’s almost like brain horror, stuff like Irreversible. I don’t know if you would call it horror, but you’re definitely going to be disturbed. Have you seen Irreversible?

Yeah. There’s an extensive rape scene in that movie, which is why it’s kind of tough to watch. I wouldn’t call it horror, but it takes a horror mind to watch it. You’ve got to be able to sit through something like that. How did you feel that affected you? What do you think was so powerful about it?
I think it was a really intense artistic statement and a very risky move. When you make a movie like that, you are not saying to yourself, “I’m going to make a fortune with this.” You must have a specific reason you need to make that movie. It’s more like you feel compelled. “I’ve got to make this movie. I have a statement I need to make.” That’s why Blood Meridian was good. He had a statement he needed to make. That’s why anybody who has made those kinds of movies does.

What are some of the ones you’ve watched recently that you really like? If somebody was going to ask for a recommendation from you, what would you tell them to watch?
Oh man, I don’t know. That’s a tough one. People keep asking me that lately. I should have a better answer.

You’re going to have to figure out your answer (laughs)!
I know, man. I’ve got to come up with a better answer.

I really loved The Texas Chainsaw Massacre remake with Jessica Biel. I am a huge fan of the original Texas Chainsaw Massacre, and I thought they did a good job of keeping it relatively close to the original but putting their own spin on it.
Texas Chainsaw Massacre is great. For my brain, when all that translates to music, it translates like a soundscape I can write mentally ill lyrics over. On Saturday Séance Songs, I tried to have 12 entirely separate genres. It doesn’t follow anything. You hear the first song, and then the second song sounds nothing like the first song, all the way to the end. That’s kind of a criticism of Nim Vind. People are always saying to me, “When you do that, you alienate your audience.”

My opinion is I think the audience is fking bored of being treated like everything is a one-trick pony, a one shot deal, that I can only do this one tiny thing and that’s it.

I don’t do that at all. There’s a sound concept, which I guess is me and the sound of my voice and the way I compose, but otherwise it’s 12 different thoughts. It’s almost like it’s 12 short soundtracks. Pick what you like. It’s on there. It’s as if someone took some bad acid and then watched a zombie movie and then read some Cormac McCarthy and then went, “OK, here’s my take on the Beach Boys.” That would be my song.

Nim Vind was posted on January 5, 2015 for HM Magazine and authored by David Stagg.