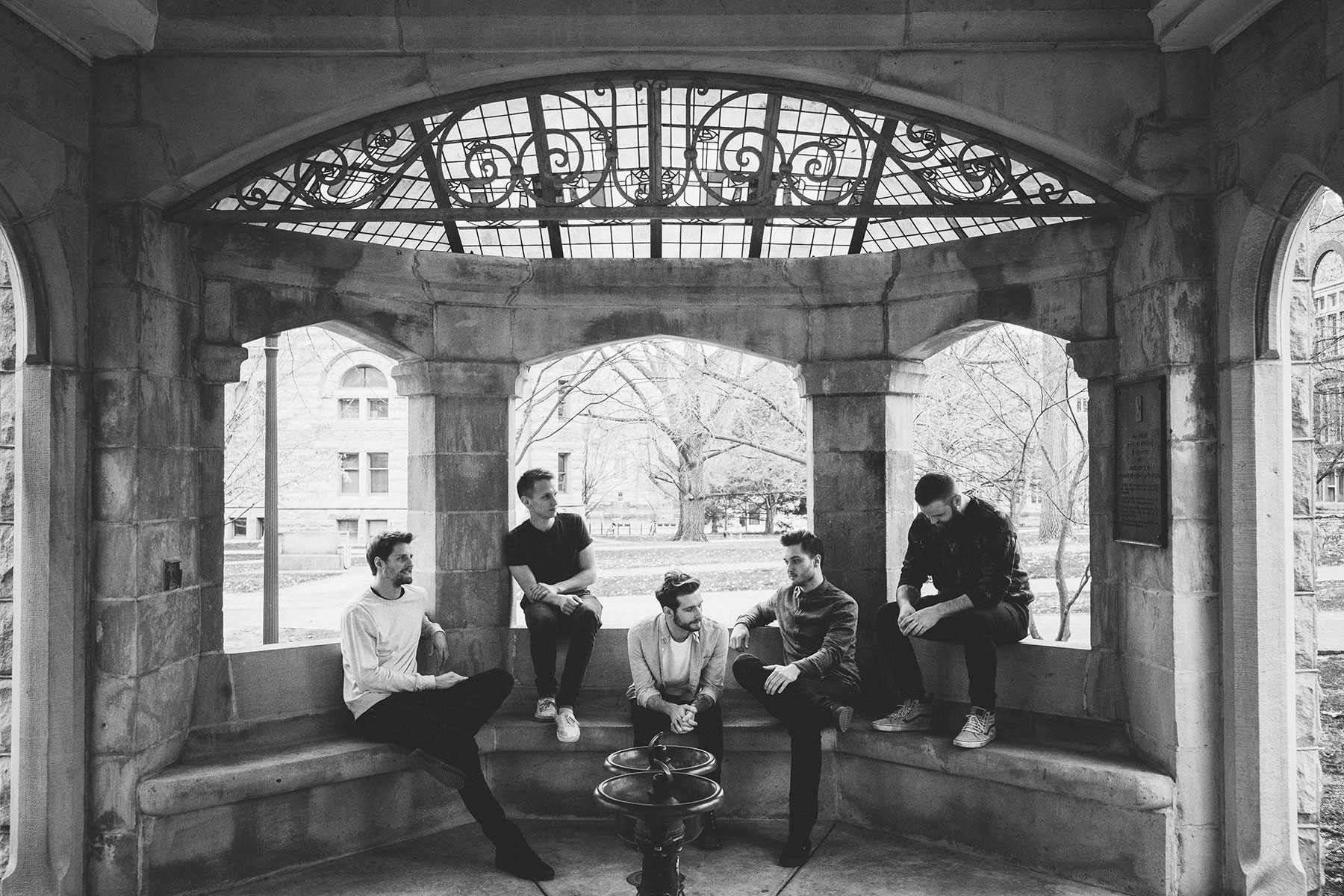 In January 2014, Indianapolis-based metalcore band Forevermore had released two full-length albums. After going through some major internal changes, they were seeking unique potential for an as-yet-undiscovered amalgam within the band when they welcomed in Kramer Lowe as their lead vocalist. The former frontman of Christian hardcore band Onward to Olympas, Lowe brought musical experience that gelled with the quartet. Collectively, the new lineup of Forevermore found the combination of their talents to be complimentary, and they hit the studio just a few short months after the restructuring to create what would become Telos, releasing the album with renowned label Solid State. Heavy in sound and ideology, the album broke into Billboard’s Christian Album and Heatseekers Charts. Well regarded by press and listeners alike, Telos was a new beginning, holding a promise for the future. And now, two years later, the band is entering the next step in their evolution.

Forevermore is on the horizon of unveiling their next full-length album, Integral, and preparing to launch a full U.S. tour in support of its release. Unlike anything pre-dating it, Integral is unique in using the hyper-specific concept of Spiral Dynamics to form the album’s track listing and concept. Spiral Dynamics, a socio-psychological theory formed and furthered by Dr. Clare Graves and his student Don Edward Beck, is centered on the evolution of society from a primitive worldview to an idealized “us”-minded global awareness code of living.

The roots of Spiral Dynamics are eight levels of human values development (called vMemes by the authors of the paradigm), and each level is represented as a unique color. The songs on Integral correspond to these colors, their lyrical content to that level in the methodology. A great example is the most recently released single, “Order,” which represents the color blue in the theory. It is the level of development where religion is introduced and where you would begin to find a relationship with God in the complex human experience. The concept — and adopting it for an album — is a puzzle that is equally intriguing and controversial on some level, Lowe would admit, natural when discussing the interpretation of life and society’s role in development.

With the grandiose album set to drop on July 22, the members of Forevermore are independently enjoying the dwindling solo moments before reuniting and cramming together in a van. They’ll hit the road with metalcore brethren Kingdom of Giants and Darkness Divided for the Integral album release tour. One of Lowe’s last personal ventures is hitting up Warped Tour in his home state of North Carolina as the famed festival takes up residence in Charlotte. On this mid-90s afternoon — that feels more like 100 plus — he has intentions of braving the sweltering heat to see Gideon, Silent Planet and Yellowcard (if only to say he was there for their last stint). Between deciding which bands to catch next, hanging out with friends manning a studio booth and fighting an ominous incoming thunderstorm, Lowe took a few minutes to chat with HM about the next chapter for his band.

I was hoping you might want to talk a little bit about Integral since it’s coming out here in a couple weeks. It’s one of the most unique albums I have heard in a long time, I think just because of the concept.
That’s awesome. The concept idea came from our guitarist, Jared. He’s really big into philosophy and podcasts and different things. There was an interesting podcast — I’m not 100% sure what the name of it is — but it had some Christians and scientists and the theory that had the Spiral Dynamic concept, and it just seemed like it would work perfect with an album concept with a track for each stage. So that’s where he came up with it, and then we all said that it was really interesting and we went with it.

Do you think that your fans and listeners will pick up on the overall theme, even if the whole idea of Spiral Dynamics is not fully understood? Will they still take a lot away from Integral as an album?
Yeah. I know the album is one of those that you kind of have to dive into, but you can still get a brief understanding and know that each song (and color) is a different concept between consciousness and space. There’s going to be so many ways people see it from. Some people are just different shades. Some people think in the blue shade, some people think in the orange. I hope that the people that think or are made that way can get it in those songs, or in some way that they can connect to a song and the whole entire concept.

If you were to identify with one of the colors, which one would you say that you are?
I feel like I would be like a yellow. There’s good and bad to each stage, and I feel like the yellow takes all of the good, understands it and is just more open to everyone’s ideas. So, I feel like that could be where I’m at, but my band might think something different (laughs).

I can see how it would be up for interpretation pretty much no matter what way you look at it. That’s really fascinating though.
Yeah, I’m still very new to all of this, and I’m always trying to read even more and listen and understand it…

Well is sounds like you have a pretty good handle on it. How did you get some of the ideas for the song names on this album? “Ikigai” is obviously a Japanese name, how did that come about?
I was riding in the car with Michael (our guitar player and singer), and we were just trying to think of song names. When he wrote that instrumental song, it had a lot of Asian influence and Asian instruments. The transitional part of the album’s concept is when (the conceptual character) is trying to find his purpose, so I think I just googled “Asian words for purpose,” and it came up with “Ikigai.” The definition of it went exactly with the transitional part we were trying to go for.

So this is your fourth abum?
Yeah, it’s the second on the label and fourth total for full-length.

How do you feel about it overall?
I feel great. I feel like we worked really hard. For the first album, Telos, I was brand new in the band, and it was a rushed process at the label. We had to get the CD out. I pretty much joined and wrote seven songs in a span of… I don’t remember, like two months. I joined the band in January and was in the studio in March.

That must have been really overwhelming.
Yeah, so we didn’t get a feel for how we are personality-wise or what our musical tastes really were and (had to) kind of just put it together. I mean, we thought it was a good CD, but with this one we had a lot of time to work. Pretty much immediately after Telos came out, we started writing new music. So I feel really good; I feel like it’s a good balance and where we want our sound to be. I’m hoping that the response is going well. I know a lot of people were kind of disappointed from when I joined the band — well, not a lot — but I feel like people were disappointed there wasn’t as much singing as the previous independent release.

I was able to listen to it today actually, and feel like you guys have a really good balance. So, you feel like as a band, you guys are meshing really well, your personalities have started to click and you feel more like you’re in synergy?
Yeah, definitely. I remember when I first joined the band, we went on tour in April, so I only knew these guys over the Internet for, like, three months, and we still clicked really really well together. Now, we’re always still learning how each other thinks, and obviously we’re just growing in the relationship and figuring out things as the years go on and (we are) touring way more. But yeah, it’s definitely good.

Are you pretty stoked to get back on tour?
I’m really excited. It’s cool that it’s starting down here on my side. Because the band’s based out of Indianapolis, I’ve always had to fly up there and then start the tour on the west coast or something. But now we’re starting in the Carolinas.

So these guys you’re touring with- Kingdom of Giants and Darkness Divided- tell me more about them.
Darkness Divided has been our really good friends for about a year and a half now. They shred, they’re humble- they’re awesome guys. Super talented with their instruments. And Kingdom of Giants we don’t really know too much about them. I’ve just been personally talking to their singer, he’s a super cool guy. I’ve always heard their band name before so when we were planning our album release tour, we were thinking of bands to tour with and we brought that one up and they were down to do it.

That’s going to be a pretty metal show between the three of you.
Yeah, I’m excited!

Forevermore was posted on July 13, 2016 for HM Magazine and authored by Danielle Martin.