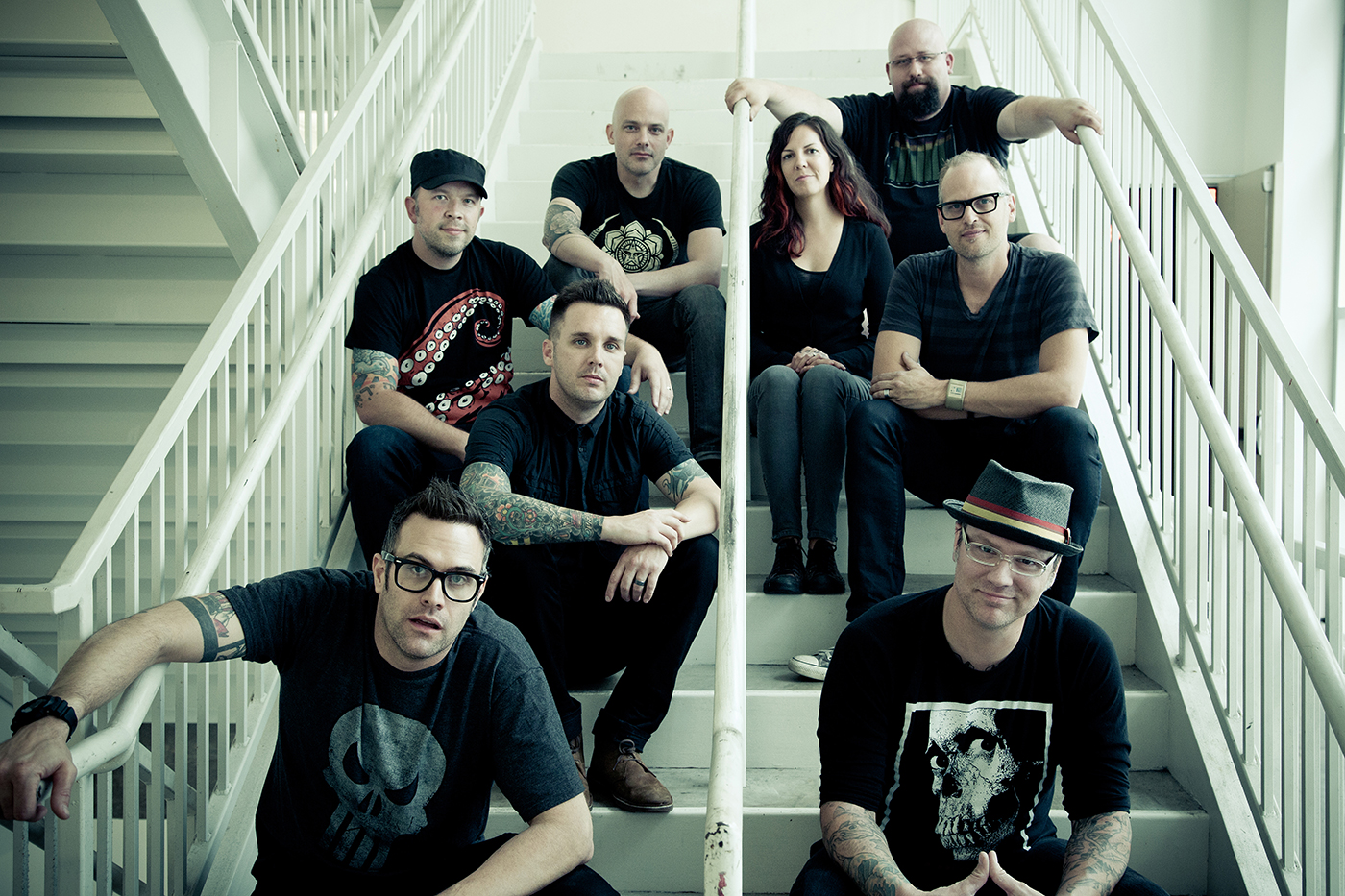 Reese Roper still can’t believe people think it’s worth traveling across the country to hang out with his band, Five Iron Frenzy. “That kind of thing just makes me feel super awkward,” the singer explained.

But that’s exactly what about 40 people did to attend FrenzyCon this August in Denver. These were the “Superfans,” as Reese calls them, who pledged enough money on Kickstarter to be invited to an album listening party more than two months before the official release date of the recently reunited band’s new album, Engine of a Million Plots.

After a successful run from 1995 to 2003, the ska-punk octet decided it was time to hang up their horns, much to the dismay of fans everywhere. Known for goofy antics, spiritual insight and catchy songs, Five Iron Frenzy had developed an intense core following, and these fans continued to support the band even after the breakup. The chat room on the band’s website continued to be a thriving community, and some folks couldn’t help asking whether the band would at least get together to play Cornerstone again each year.

“We had said that we would wait 10 years, so that kind of held it at bay,” Roper said.

But when those 10 years were up, the Internet couldn’t contain the excitement. Speculations sprung up around some comments made in interviews with old members of Five Iron, and a mysterious countdown appeared on the band’s old website.

With no actual plans for a reunion, Roper says the band tried to put out the fires and keep people from getting their hopes up for nothing. The countdown, as it would turn out, was only meant for a reboot of the website.

But they also remained close friends and saw each other regularly, and with time the question always came up, “Well, what would happen if we did?”

Scott Kerr, the band’s original guitarist, started writing some songs, and after recording a couple in New York, the rest of the Five Iron crew decided it was good enough that they wanted to turn it into a full-length album. One of those songs, “It Was a Dark and Stormy Night,” was released when the countdown on the website expired, giving fans the surprise they had hoped for all along.

“(It was) just a good excuse to make music with our friends and to hang out is what drove most people to do it,” Roper said.

Kerr left the band quietly in 1999, starting a new band by the name of Yellow Second. In the self-produced 2010 documentary “The Rise and Fall of Five Iron Frenzy,” fans finally got the full story.

“I lost my faith,” he explains, saying he felt it would be inappropriate to stay in the ministry-based band even if he was still best friends with the other members. Kerr was nervous about returning to Five Iron for this reason, but so far, he’s only had one conversation that was the kind he feared he would be having constantly.

“The vast majority of interactions I’ve had with people about this subject have been very positive,” he said. That might not have been the case if Kerr had been more open when he first left the band 14 years ago. The warm reception seems to reflect some bigger changes in the Christian music scene and in the American church in general.

“I also have a lot of friends that are in the same spot,” Roper added, “where they have either stopped believing in Christianity or they are just full of doubt.”

These relationships helped lead Roper into less familiar territory, lyrically. Songs like “Zen and the Art of Xenophobia” still feature biting social commentary, but most of the tracks feel more personal and open-ended than what he was writing in the past. “I wanted to write … an album for those guys that says, ‘Hey, I don’t know everything. I still have questions.’”

Roper says part of that change also came simply from the wisdom of age and growing through life experiences. “I cannot throw out edicts like I did as a younger lyricist,” he said, “where I would just say, ‘Hey this is this, and this is how to do it, and you know, here’s what God is, and this is what he’s about.’ To me, with life, there are a lot more questions. I think that if you have (all the) answers, for most of them, you’re usually wrong. And I don’t think there’s anything wrong with (asking questions). I think if God is really who He says He is, then He’s not afraid of our questions, and hopefully He has the answers.”

Kerr says the other thing that made him somewhat reluctant about playing in Five Iron again was the friction that occurred during the songwriting process.
“Roper and I tended to butt heads quite a bit, and there were years where our friendship definitely suffered as a result,” he said. “I was nervous about getting into another situation where I thought our friendship might be at stake because of creative differences.”

The first time around, Kerr typically wrote all the music and Roper came up with a vocal melody and lyrics after hearing the nearly completed instrumental. But after leading his own band Yellow Second, Kerr says he learned a new approach to songwriting that helped bring together a more powerful and cohesive record. “Since then, I had become more of the opinion that the music should become more of the slave to the melody,” he said.

This time, when Kerr was writing songs for Engine of a Million Plots, he developed a vocal melody with the music and sang placeholder lyrics so Roper had a better idea of what to do. That also meant more restriction, and Roper sometimes would tweak the melody if he thought it was necessary to improve the song.

“But, of course, that’s where the contention arises,” Kerr added with a laugh.

“Scott and I had a lot of frustrating times and talks,” Roper admits, “but I think what is impressive, especially to me, about Scott is that he always put our friendship first and we still made a good album. Or at least one we like.”

To promote the new release, Five Iron Frenzy has already made two out of four planned music videos. That’s a lot of videos for an independent record with only 12 tracks, but Roper says it makes sense.

“What I see is, people that I work with, when they find out I was in a band, the first thing they do to hear it is they put our name into YouTube, and then some awful video from 1996 comes up (laughs),” he said. “And then they comment on how old I look right now.”

So instead of subjecting possible fans to the throngs of horrible live recordings that fill YouTube, several members of the band wanted to give the public a more professional option. “They’re really pro-looking videos,” Roper said. The band tapped two directors, asking each to shoot one live video and one concept video. At our writing deadline, Five Iron already recorded videos for “In Your Veins” and “Battle Dancing Unicorns with Glitter,” with plans to make two more for “So Far” and “Zen and the Art of Xenophobia.”

All of this is being done while the members of the band continue working full-time jobs and raising families, and at this point, their homes are now spread from coast to coast across the country. To keep things connected, they wrote songs together by passing files back and forth online, and they fly out to play shows on the weekends.

For the skeptics wondering just how long this reunion is going to last under the weird conditions, Roper says that he and Kerr are already fine-tuning that writing process as they begin to talk about song ideas for the next record.

But for now, the process seems to be working as the result of the combination of this new songwriting method plus 10 years in a changing culture has taken this first record after the reunion further away from their ska beginnings than ever. The reggae roots of ska are only perceptible on “Someone Else’s Problem,” a heavy-hitting song with thick bass, bold horns and even some organ work lingering over the syncopated guitar riffs. The rest of the record is more like the rock-with-horns found on The End Is Near, the last studio album Five Iron Frenzy made before the breakup in 2003.

In other words, it’s not a throwback album from a bunch of old guys who used to be popular when you were in high school.

It’s not like all the ’80s rock bands that recently felt the need to get back together to make another terrible record. No, Engine of a Million Plots is a very solid effort from a band getting a fresh, new start in 2013. “Easily, this is our best record,” Kerr said, and Roper agreed.

Five Iron Frenzy was posted on November 6, 2013 for HM Magazine and authored by Eric Petterson.