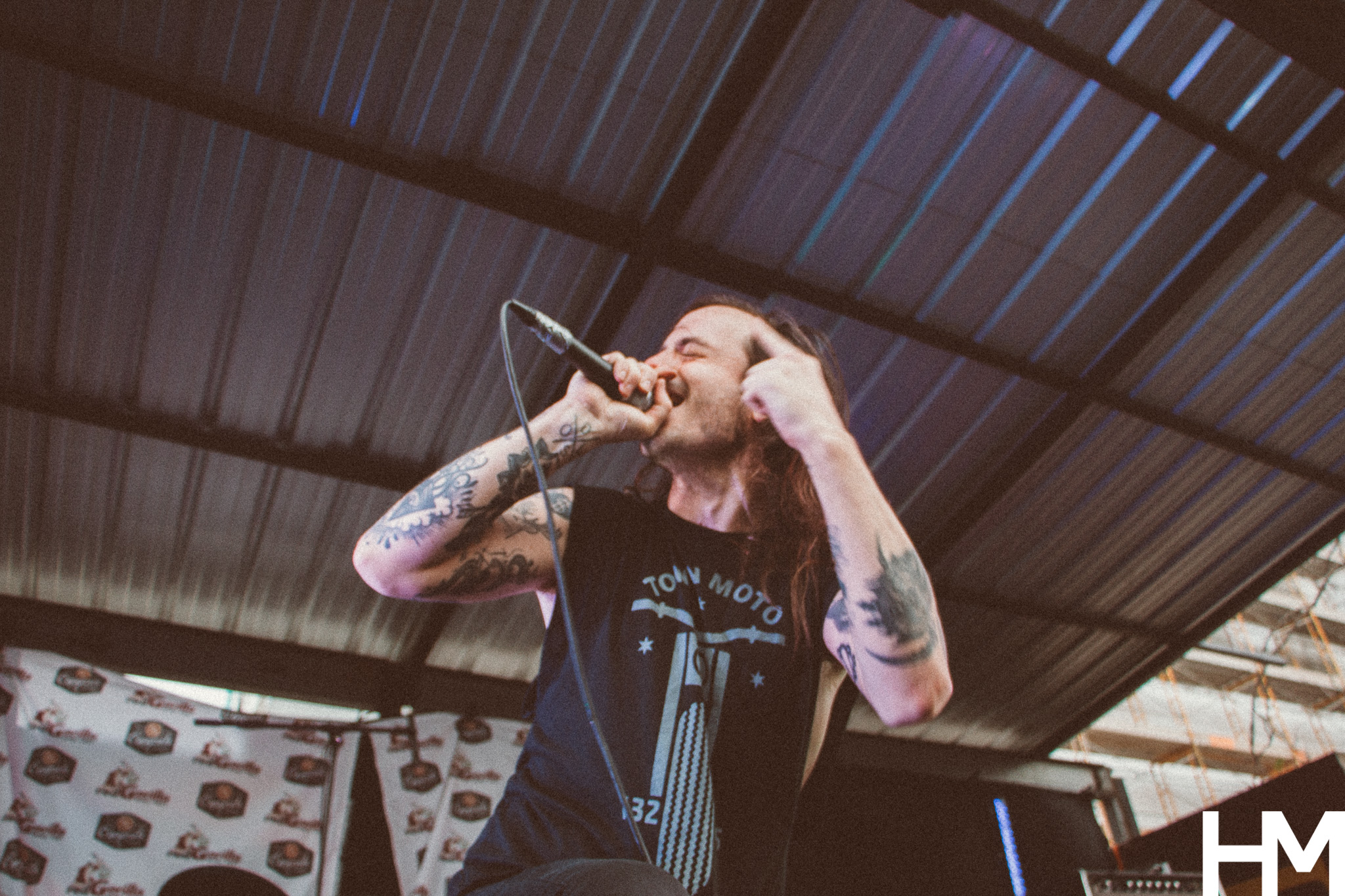 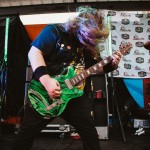 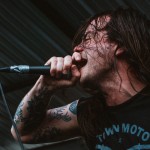 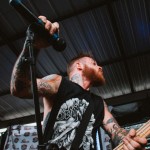 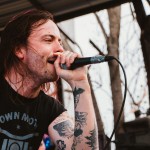 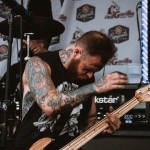 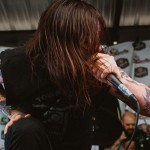 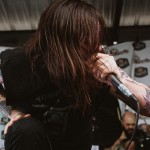 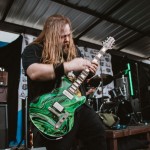 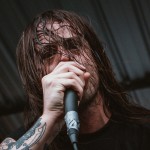 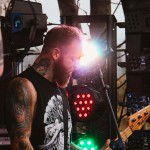 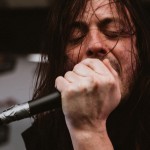 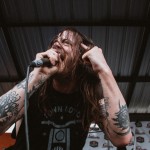 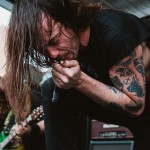 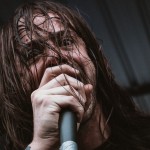 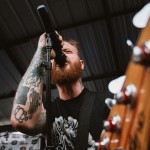 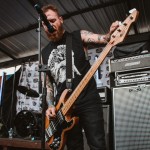 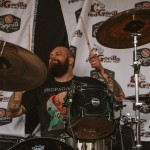 Weirdest piercing?
Bassist Jaye R. Schwarzer: That any of us have?
Vocalist Liam Cormier: I don’t think any of us are pierced.

What? None of y’all have anything pierced?
Guitarist Scott Middleton: No.
Schwarzer: I had my ears pierced at one time.

What happened? Just, over time…?
Yeah, I guess!

I can’t believe none of y’all have anything pierced. Alright, how about coolest tattoo?
Schwarzer: Probably Mikey. He has that homemade “DEATH BROS” tattoo.
Drummer Mike Peters: Death bros.

Who did that?
Cormier: Jaye did it while he was wasted.
Peters: We drank a bottle of wine and thought it was a great idea.

It always is at the time, right? In prisons, they can do awesome work with extreme limitations.
Yeah, we do a lot of hand poke tattoos. Most are done with needles.
Peters (pointing to a portrait tattoo): This is also a hand poke one, but it’s done by a real artist, not by one of us.

I saw that one when you all were playing yesterday. I thought it was a pretty sweet tattoo then. I’m scared to get a portrait done because I’m afraid they might do the nose all weird or something.
Schwarzer: You just have to go with somebody good.

Hopefully, you will have done your research beforehand. Unless you have a couple of bottles of wine.
Cormier: You each have a bottle of wine and then you go for it.
Peters: The great part about the “death bros” tattoo is that it’s stopped us from doing other things while we’ve been drinking. Like, one-time Jaye was going to, like, spray-paint the back of his jacket while he was wasted and I was like, “Jaye! Think about this!” and pointed to it (laughs). “Think about what you’re going to do! I don’t think it’s a good idea.” And he’s all, “You’re right! You’re right” (laughs).

How has is been touring before the release and immediately after the release?
Cormier: Well, it hasn’t even been — it just came out. I mean the shows that we did, like, we played down in Detroit and kids were singing along to new songs. Even yesterday when we played new songs, there were some guys singing along.

There was some guy in the front who really loved you guys. He was going for it.
Schwarzer: That guy got me pumped!
Cormier: (Laughs) I always think it’s crazy that people would know the words to songs that soon afterward, you know what I mean? So, yeah, I’m excited. In general, when people will figure out the words to songs is crazy, but to know that they’ve done it that soon? They’re psyched.

On all these talking points they gave me, they use pieces of your other albums to describe your new album. How would you guys describe it?
Cormier: I think it’s fair that it is a good mix of all of our records fused into one. We definitely look at all the songs we still play live all the time and how that makes for a great set and what we love about that and what our fans obviously are stoked on. Everywhere we go, we get asked to play the same 20 songs.
No matter how many albums you put out.
Cormier: (Laughs) It’s like, okay, well, if we boil down those 20…

So you actually do write for a lot of the live show?
Middleton: We definitely pride ourselves on being a good live band and putting on a good show, so we want our album to represent that rather than trying to represent “an album.”

Well, some people write for that, you know?
Cormier: Yeah. I think a studio can have its own certain effect on writing, but the last two records we’ve written as if we were going to play them live, like a set list.

So in the songwriting process, did you write them like that, top to bottom, or did you kind of figure it out afterward?
Cormier: No, but when we’re laying out the record, you’re like, it’s fun to put a thrash song after a slow song or it’s fun to run two fast songs together. Just pacing it that way.

When you set out to write the album, was there any kind of goal in mind?
Cormier: No, we definitely don’t do any writing on the road, really. People, I think, come up with riffs ands stuff on tour, but it’s mostly when we get into the practice space and really start working.

Who’s the main songwriter?
Cormier: Oh, we all do it. For sure.
Schwarzer: Everybody has their hand in it, for sure.
Middleton: We all get in a room and someone will come up with an idea. We will feed off each other. We’ve always been like that. From day one. We’re all equally inspired. Everyone’s writing and contributing ideas, and it’s very diverse.
Cormier: There are no egos. If you’ve got an idea, we’re going to explore it and see what we can come up with. When we did this record, we would try to write a new song every day. We would record some ideas, demo it and next day — new ideas, new ideas, new ideas. We would plow through and soon we had this pile of material. After a couple months, you can listen back and tell which ones were really the good ones.

How long did you guys spend working on this record?
Cormier: Probably five months.
Peters: Probably the longest time we’ve ever had to spend on a record.
Cormier: At fifth record, it gets longer and there is more to consider. When you’re in the tight constraints of time, you sometimes end up making a lot of mistakes. Some of them work out, some of them don’t. Or there are songs you just don’t play.
Peters: We dissected songs like crazy. We’d write it, we’d be cool with it, we’d rip it apart again, come back and see if we could change it up, tons of refinement.
Cormier: Cutting songs down in time. Making sure everything is to the point. Even “All Hail” is the shortest on the record and it was originally two minutes. We were like, that’s too long. We got it down to 1:30, and it was perfect. We knew that’s all it needed to be, a thrash song, nothing more.
Peters: We needed to take a break from being on the road, so why not focus on making really good records?

Cancer Bats was posted on April 17, 2015 for HM Magazine and authored by David Stagg.