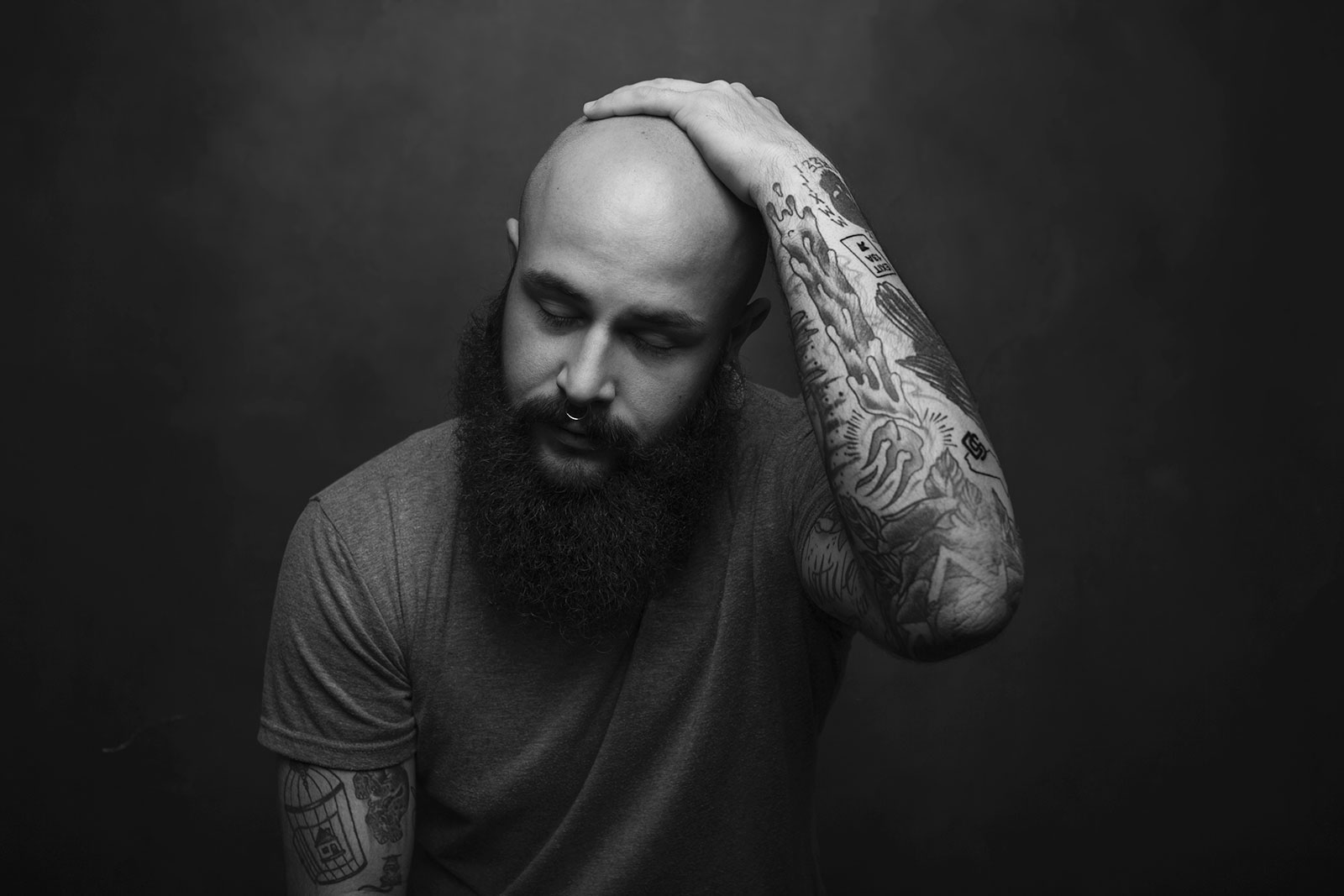 Being As An Ocean

The Many Sides of the Ocean

On the latest album from Being as an Ocean, Frontman Joel Quartuccio is at his realest

I was first introduced to the sound of Being as an Ocean while interning at HM Magazine. They had just released their second full-length album, How We Both Wondrously Perish. I heard the introduction of “Death’s Great Black Wing Scrapes the Air” and I was sold. Their sound has all the elements a post-hardcore fan would appreciate; the spoken-word style reminds me of Dan Smith (Listener), and the screams remind me of Counterparts and Hundredth. The lyrics are heartfelt and delivered in a variety of ways, from screams and poems through spoken-word style and melodies. The steady two-step drum beats are complimented by smooth instrumental melodies, which are fronted by incredible clean vocals. All the different sounds blend together in a way I’d never heard before.

I was mentally prepared for the interview a number of times, but trying to arrange a time to speak with Quartuccio was quite the mission. Quartuccio — the warm, friendly frontman of BaaO with an epic beard — has been touring with his band all over the world. The first time I got a hold of him, he was sitting on a rooftop in Vienna, Austria, late at night. He couldn’t get a good connection indoors so he decided to climb onto the roof. I couldn’t help but laugh as he explained his predicament. I imagine his view was spectacular that night as we introduced ourselves.

That setting might have been the perfect environment for our interview. What an experience it must be to travel the world, different city every night, sharing a bit about your story while looking across the night lights of Vienna. I imagined the challenges he might have faced while traveling and the frustrations with the various qualities of accommodations and transportation. I was impressed with his determination to have this interview, even though it was during the end of the tour and the connection sucked. He was exhausted. It may have been just as well; Fate intervened and the connection was so pitiful, among a broken call, we agreed to try it again another time.

A week later we tried to give it another go; he had recently returned home to the United States. Our interview was scheduled for late afternoon, but this time, no sign of Quartuccio. I didn’t know he had returned from his tour, yet. After about an hour, I decided I would take a peek at my emails. David Stagg, HM’s Editor, had sent a message saying Quartuccio might be sleeping off the bangover, a sleep well-deserved for a band so dedicated to touring. That same dedication made carving out time to write their newest record, a self-titled effort from InVogue Records, difficult. “Now, having the finished product,” he would tell me later, “it almost feels like a dream that it’s done.”

Hey Joel, how have you been?
I’ve been good. It’s nice to be at home. I was traveling yesterday, flying back, but yeah, feels nice to be back.

You flew in from your world tour, is that right?
We’ve been on tour for the past three months in Southeast Asia, Australia, the U.K., Europe and now I’m back home in San Diego. It’s nice to have a little break.

Yeah, I can imagine. That sounds like a very hectic tour.
It was good, but it had its trials.

This is all to announce your new album?
Yeah, it was a bunch of support tours, except for Southeast Asia, but yeah, we were playing a new song every night to promote the album and get people talking about it.

Did you have good reactions?
I thought we had a really good reaction. I was happy with it. It was cool because I was doing a free merch thing: The person I saw come over the barrier the most times in that song (got free merch). We knew no one would know (the song), and we did it to keep up the energy and help people get into it. It was fun!

Before the whole tour, what got you guys so amped up for the album? Was it different this time around?
It wasn’t necessarily different other than the fact that we had a little bit more of a time crunch, with how often we tour and things like that — specifically taking the time to write out the music. There was a little more stress with that part, but we feel it all came together really well. We were amped on writing it and recording it. And now, having the finished product, it almost feels like a dream that it’s done.

The last album was really loved; a lot of people really enjoyed it. Did you feel pressured to meet the expectations of fans or the label in making this new album?
I was trying to write from a place of honesty, and the thoughts did cross my mind, but those were the thoughts I had to throw away. I love and appreciate our fans so much, but I know if I start writing things I think people want, I’m not being honest with myself. This album was important to me, so, at least on my end, I tried to remain honest with where I was in my expression.

There is the hope the album is well received. You hope people like what you make. But, in the end, you make it for the pleasure of it, the escape we found in making music, and for playing it for our lives and all that stuff.

That shows how you guys have all grown since the last record, because you are taking your artistic ambition forward but you’re also confident in the support you’ve gained from previous work. You can take those risks.
In essence, that’s a big part of it, being confident in that fact. … The second album was different from the first, so very much for us: There’s a new producer, there’s a new member. We were given hope because of the reception of it. So it gave us the license, at least in my mind, and the confidence to continue on and do what came naturally.

It’s nice to see you have confidence moving forward. When you’re writing, you’re writing from the experiences that have happened to you, the things that have changed, the stories that you’ve been told, and these are the things that are growing you and maturing you into new artists, different from the last album.
Yeah, totally, and people change constantly, so the music people make should change as well. Or else, it’s just a carbon copy.

One thing I wanted to touch on is this theme of forgiveness and trampling over struggle (through) love, which is presented in the lead single from your album, “Little Richie.” Do you believe forgiveness and love have a greater ability to improve our character and inspire people instead of this popular concept of seeking justice for ourselves?
Absolutely. I think there’s a different kind of social justice that’s encouraged when we are pre-emptive and take care of each other before things arise where we have to react. I think there’s something empowering between choosing to love and choosing to forgive for ourselves.

A lot of the album is about forgiving the things that make us human. Everyone has things in them — whether you want to call it darkness or a soft synonym for evil — where there is that humanity; these things that make us imperfect. We all have them but they vary. I think it’s extremely important in the human experience to forgive those things that take our power away to become better people: guilt, shame, etc. I think both love and forgiveness are massive weapons for justice, both in personal relationships and in public.

So like it’s like a universal rule; the golden rule: “Do onto others as you would have them do onto you.” And the other universal rule, don’t be an A-hole.

(Laughs) It is simple. That whole concept comes from a man who lived just over 2000 years ago: Jesus. You don’t have control of what people do to you and you don’t have control of what they say or what they think. All you can control is what you do about it; how you react. I like the style you took on that concept with the track… and this is me assuming Jesus’ life is your foundation and inspiration, based on reading into your lyrics. Can you confirm that?
Well, my foundation for writing the things I do… I can’t take my personal experience with God out of it. But like —

You want to make it universal?
Well, take my band mates: Even though not all of them share the same foundation or belief or opinion, they are very gracious with me in letting me express something I believe to be part of the new experience for myself, and (I’m) the only person I can speak to on that subject.
I think, even aside from the idea or belief in a God, we have to look at what’s more basic in just taking care of each other as human beings. That, I think, was part of Christ’s message as well. Heaven can be here on earth, it’s available to us. But we have to help it come along and create it with each other, you know? There can be harmony, it just has to be expressed as love to each other and to treat each other with respect and, with that love, things can change in the world.

Being a loving, forgiving person to others, sometimes that’s the best way to have harmony with people who are different from you and who believe differently than you. You just treat people well and understand we all have struggles and relate to each other and that ultimately is what’s going to bring harmony and bring peace, right?
I do believe that. Free of judgement and living in that perpetual state of forgiving. You can never be offended; you can only learn from other people.

Even learning how to be versus how not to be (laughs).
Exactly, exactly.

I also wanted to find out what’s ahead for you guys? You’re going to be on the line up for Vans Warped Tour?
Yes. There’s nothing more exciting than Warped Tour. We’re excited to start it and support doing it.

Yeah, and you probably don’t even want to think about it right now after a world tour.
True. I’m very much in my own mindset, and I know that when the time comes, I’m going to thoroughly enjoy it.

Being as an Ocean was posted on June 24, 2015 for HM Magazine and authored by Sarah Dos Santos.