April 9, 2010 – (Fort Lauderdale, Fla.) – There’s something special about a farewell tour. For Copeland’s final outing, they basically could hand-pick whoever they wanted to take out with them so the bill ended up being four talented indie rock bands, each with a unique sound and an interesting connection to the headliners. 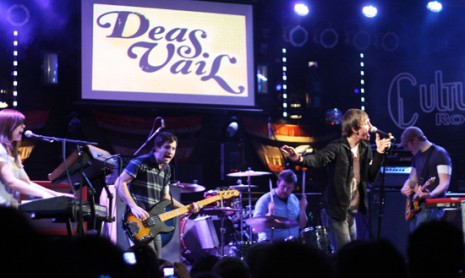 Deas Vail played first, led by piano and falsetto singing. The crowd talked through their songs at first, but it didn’t take long for those filtering in to get sucked into the sound. The band mostly stuck to material off their newest, Birds & Cages, which led to their songs mostly sounding the same. Still, “Sunlight” and “Atlantis” translated well live. Wes Blaylock’s voice brilliantly built and relaxed emotion during the latter, combining with the atmospheric guitars to create interesting dynamic contrasts. They reordered the songs from the album’s track listing, which added some interest to the set. “Cages,” with its urging “Hello, hello can you hear me / Can you show me that you understand” highlighted the second half, and “Birds,” with its swirling vocals, was last, leaving the room with an approving buzz. 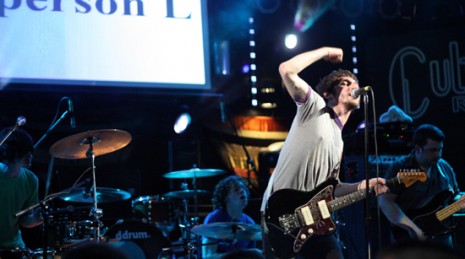 You could tell Person L had an atypical sound before they even played a note, as they set up two separate drum sets – one traditional kit and another with only a snare, floor tom, ride cymbal, cowbell and tambourine. As the band came out, they feature a lead singer/guitarist, a bassist, the aforementioned drummers and a guitarist who switched to piano after the first song. Frontman Kenny Vasoli, better known as lead singer of The Starting Line, greeted the crowd and joked the first song was about how not happy they were that this was the end of the tour. Person L’s sound is fairly simple but easy to tap your foot to, with roaming bass lines, distortion-heavy guitar solos and piano and marimba accents. The two drummers mostly played rhythms in unison, but after they traded places halfway through their set, they played more call-and-response and complementary fills. That made a unique element to their indie rock sound as their two sets of drum sticks pounded in unison. They even mimicked each other’s upper-body motions as they played right-to-left tom and snare runs during “Good Days.” Vasoli voiced his gratitude for Aaron Marsh producing Person L’s second album, The Positives, before playing the title song. Vasoli was by far the most energetic frontman of the night, letting fans in the front play along on his guitar and going into spastic fits while soloing. 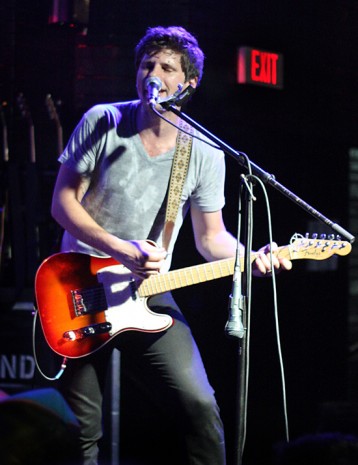 I Can Make a Mess Like Nobody’s Business came out and immediately created a coffeehouse vibe with their sound and frontman Ace Enders’ conversational style. His band featured a drummer, who often used brushes in lieu of sticks, and a female keyboard-bass player / backup vocalist who, when Enders introduced her to catcalls, mentioned she’s his sister saying “I don’t want to have to backhand someone,” sheepishly laughing, adding “as if I would.” The instrumentals and Enders’ voice lent themselves to a minimalistic sound, but with captivating dynamic swells on songs like “Old Man.” He threw in a quick guitar lick from his previous band The Early November, though it was fast enough for few to catch. It was easy to tell new material from old by the complexity and range of the vocal parts since the two I Can Make a Mess albums were released six years apart, the latest coming out less than two weeks before the show. 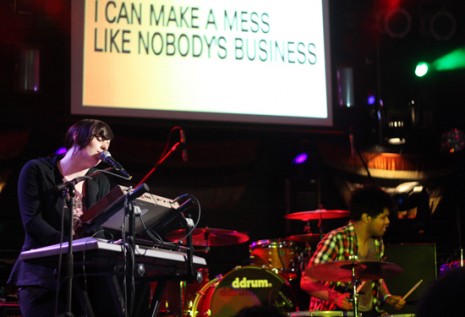 “Stop Smoking Because It’s Not Good for You” was a crowd favorite, partly because of its catchy beat but mostly as a sarcastic jab at those in the room holding cigarettes. Halfway through the set, Enders took a break to drink from his Starbucks coffee cup, an odd sight on a rock stage. He asked the audience what they wanted to hear next, as if he was out of ideas. They called back suggestions and drummer Jose Lopez mimicked a song from each band mentioned. When back-to-back suggestions came Taylor Swift and Miley Cyrus, he played the same simple riff with a look of disdain, eliciting a few chuckles from the audience. Finally Enders settled on “Whispering,” during which he showed off his immense vocal talent as he backed from the mic to harmonize beautifully with his sister. 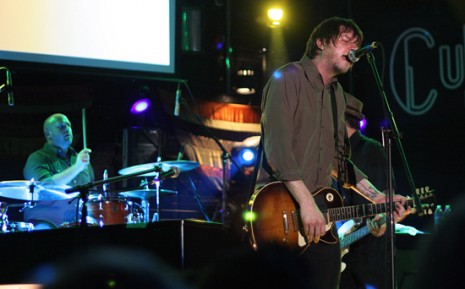 Copeland right away contrasted with Enders’ personable style, as Aaron Marsh and crew started “Take Care” with barely a “How you doin’” from the soft-spoken singer. They transitioned straight from one song to the next, creating an ambiance so it was easy to get lost in the music. Their songs struck me as not too structured, with well-placed half-time-feel sections that made them easy to groove to, like on “Careful Now” and “Coffee.” The first half of the set flew by as they mixed songs from Beneath Medicine Tree, Eat, Sleep, Repeat and You Are My Sunshine. 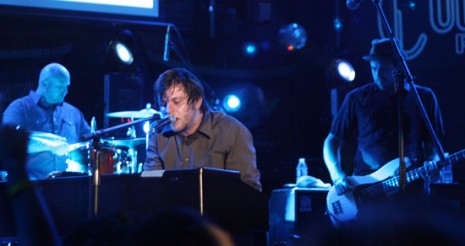 Drummer Jonathan Bucklew looked bored on older songs, though he may well be the most laid-back dude you’ve ever met for all I know. When an amp buzzed with feedback during a brief pause for tuning after “On the Safest Ledge,” Marsh quipped “This is our Nine Inch Nails cover – that was it.” A few in the crowd laughed, knowing that was just his humor.

The music definitely shone where the words were absent, though. A wall of sound from the five onstage washed over the dedicated crowd as many sang every word back to the haggard frontman. The lyric from “The Day I Lost My Voice,” “Love is a dream that goes straight to my head” might wrap up the band in one line. It sounded even better live without any electronic fiddling like on the studio version. 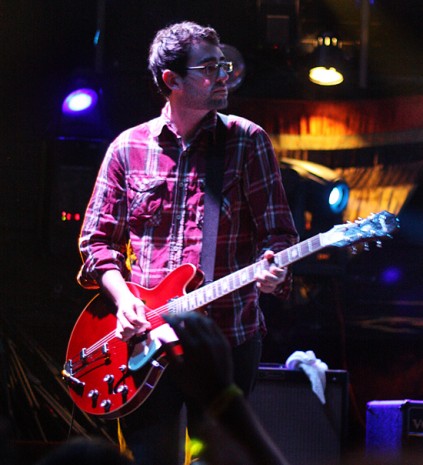 After 10 songs, I was beginning to worry In Motion would be left out, but just then Marsh introduced the next one with “this is not called ‘Hey Amanda’” and rocked through “Pin Your Wings” and “No One Really Wins.” “When Paula Sparks” transitioned straight into “California” without a break, just as it does on Beneath Medicine Tree. There’s something special about being in a room full of people lost in the moment singing along to a song from seven years ago. Marsh had a hard time keeping pitch a couple times during “California” but the crowd more than helped him out. During the song, members of the other bands snuck throughout the audience with conspicuous black trash bags and let loose hundreds of balloons during the final driving guitar line, adding a chilling picture to an already emotional moment. 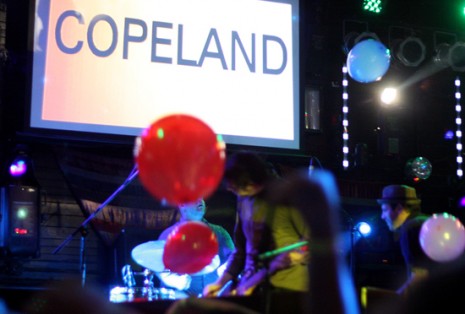 Marsh acknowledged he would love to say he was in on it, but that it was a tour prank orchestrated by the other bands. Everyone knew once he and his mates left the stage they had to come back to the cheering masses in the fittingly cozy room, so when they came back with “Brightest” it brought the vibe back to a sad enough feel for a Copeland show. They finished with “You Have My Attention.” When it hit the part a couple minutes in where Marsh took “you have my attention” up an octave and stepped back from the mic as he held the note, it was breathtaking. 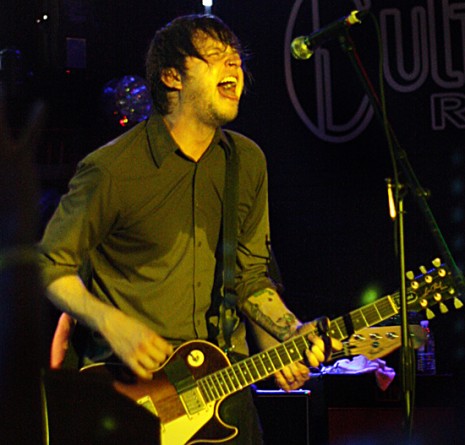 After a final instrumental flourish, they thanked the crowd for their support. It was weird not to hear them say “see you next time,” but it was bittersweet to think they’d be leaving with such a pleasant memory.

Copeland’s set from their third-to-final stateside show went something like this – I’d highly recommend it as a playlist to remember the melancholy fellas from Lakeland, Fla.:

encore:
15. Brightest
16. You Have My Attention