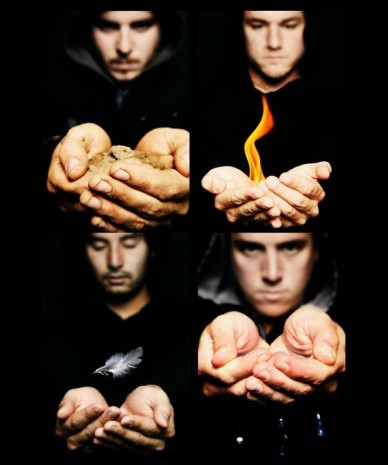 The slate of opening bands for Thrice’s gig at Emo’s Wednesday illustrated how much the band has evolved and mutated since its inception as a testosterone- fueled hardcore act. A trio of quirky indie rock bands filled out the bill, which was quite a surprise given Thrice’s history of touring with hard rock and punk heavyweights like Hot Water Music, Thursday and Rise Against. Of course, everyone who’s followed the Orange County, California-bred quartet since their mainstream breakthrough, 2003’s The Artist in the Ambulance, knows that they can hardly be pigeonholed into any one genre. New York City’s The Dig warmed the crowd up with a taut set of dance-inflected pop rock. Guitarist David Baldwin and bassist Emile Mosseri, both engaging singers in their own right, traded vocal duties over the band’s bottom-heavy tracks. A cast of nearly a dozen filled the stage to man extra percussion on the bluesy set closer.

Bad Veins, a Strokes / Arcade Fire esque duo quickly took the stage to many half cocked eye brows.  Their arrangement included the standard drum-guitar dynamic, along with a ADAT tape machine and a rewired telephone that served as a second mic for frontman, Benjamin Davis.  Visually, Bad Veins resembled the furniture from a nursing home, complete with vintage hardware and floral prints, all they needed was to cover their gear in plastic.  Visual sentiments aside, Bad Veins did an excellent job of engaging the exhausted Austin audience.  It takes work to engage a full house with only two people, especially when 98% of the audience could care less about who you are. Eccentric and charismatic, they were definitely a pleasant surprise.

Charismatic singer-songwriter Kevin Devine was the third act to take the stage, along with his tastefully named outfit the G-d D–n Band. Devine exuded a natural stage presence and sharp sense of humor, and his folky alternative rock inspired enthusiastic response from the crowd. The highlight of his set was a hard-hitting political jam that he introduced as “a BP song… an Afghan song.” For a musician who’s known for his tuneful, acoustic-friendly vocals, Devine definitely brought the rock on the outros for this and several other songs. In a surprising twist, he brought out Thrice’s Teppei Terranishi to play keyboards for the finale, “Brother’s Blood”.

Devine’s performance left the audience on a high, and anticipation for Thrice reached a fever pitch during the lull thereafter. Dustin Kensrue and company finally emerged to rapturous applause after a grueling soundcheck. The packed house instantly started moving as Thrice tore into the propulsive lead track from last year’s Beggars, “All the World is Mad.” They lost a bit of momentum on the tepid followup cut “The Weight,” but quickly regained it with the powerful triple threat of “Artist in the Ambulance,” “Of Dust and Nations,” and “The Earth Will Shake.” Terranishi’s tapping prowess on the atmospheric interlude of “Nations” was as mind-blowing as ever. While it was a little jarring to hear the latter track, which was such an incredible set closer on the Alchemy Index tour, so early in the performance, it was still welcome. The song’s devastating coda of “Look to the day/The earth will shake/These weathered walls will fall away!” reamins a spine-chiller. Technical difficulties momentarily hindered the band, but they came roaring back with “Firebreather” and “The Messenger” from the Fire EP. Then came one of the biggest surprises of the night: a haunting full-band rendition of the underrated Air ballad “A Song for Milly Michaelson.” After hypnotizing the crowd with “Milly,” Thrice kept it mellow for awhile longer to deliver the keyboard-laden Beggars standout “Circles” and the toe tapping, blues heavy, “Doublespeak.”

The last half of Thrice’s seventeen song set brought the fervor and energy expected had you seen Thrice play ten years ago.  “Blood Clots and Black Holes,” “Silhouette,”  opened a vortex in the audience. The surprise of the night, “Image of the Invisible”  drew huge chants from the audience, and featured nearly every member of the opening bands supporting the song’s monumental gang vocals.  The band ended their set with another surprise, Illusion of Safety’s “To Awake and Avenge the Dead.” Not only is this “To Awake” a rare staple in their live show, but for the final breakdown, Kensrue passed of his guitar and went into the crowd like the frontman of an old school hardcore band, it was like a flashback into the scene that most of these guys grew up in.

After thanking the audience and stepping off stage, Thrice returned for a brief encore featuring “Beggars,” easily one of the greatest songs of the bands career.  While it seemed awfully chill for an encore, the song itself was spot on and appropriately chilling, making for a respectable closer.

We tried explaining to a friend what to expect from Thrice’s show on the way to Emo’s.  Treading through the depth of their discography and their growth as a band proved to be near impossible, so we chose to let the music speak for itself, playing the highlights from each of their seven albums.  The progression is natural to the point that I can’t imagine anything else taking each album’s place on their roster.  In an industry that’s filed with everything from crunkcore to alt-country, I suspect that letting the music speak for itself is the best hope for the future, and Thrice is certainly doing that.