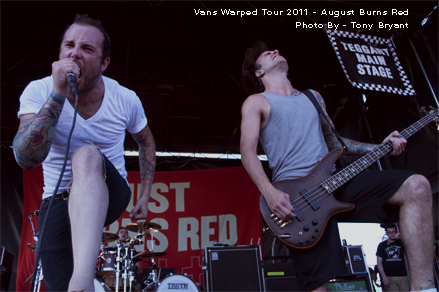 Warped Tour has always been a place to see new bands, old bands, and the big bands of the present all in a state of controlled chaos. Plenty of charities are spreading their word and causes, and Monster Energy keeping kids fueled and cool. Even with all of these tents of charities, sponsors, and merchandise the biggest draw is always the main stage. All the small stages help divide the crowd and introduce smaller artists. 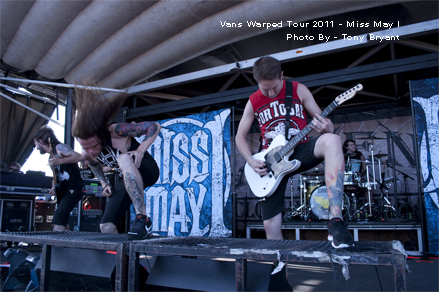 Before the gates even opened the line is packed, traffic is backed up for miles, and moms dropping off their kids, but there is one guy directing the lines and organizing all the people where to go. Kevin Lyman the creator of Vans Warped Tour, was up front working the lines, giving instructions, directions, and making sure things go smooth. From what I saw no one knew who he was, or embraced the thought of a guy who is so committed to the tour and making sure it goes smoothly that he is on the front lines doing it. 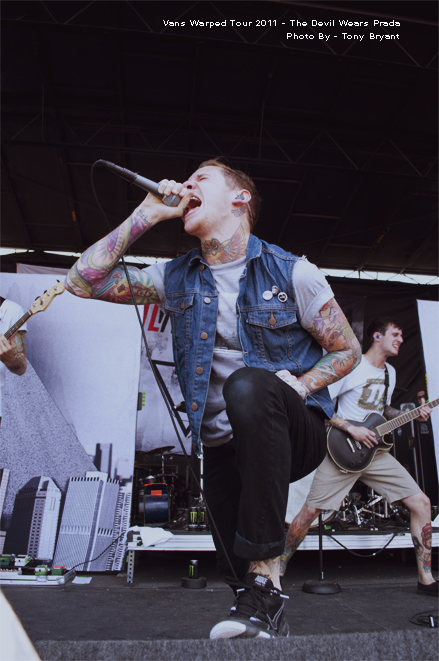 It has become clear that the Warped Tour has grown to be a big impact on the music circuit. With all the different sponsors from Vans, Nintendo, Monster Energy, Conan the movie, Trojan condoms, Truth.com, PETA, and many more. Warped Tour has become a platform for charities to reach out to a younger audience and get America involved at a younger age. From breast cancer awareness, and safe sex to supporting the troops. Nintendo had multiple tents to test out their new 3DS system, Trojan was giving out condoms and providing safe sex education. Truth.com was providing information and facts about the smoking industry while Conan the movie was giving away free t-shirts for push-ups. Monster Energy kept the crowd energized like little bunnies with free cold drinks and shade. 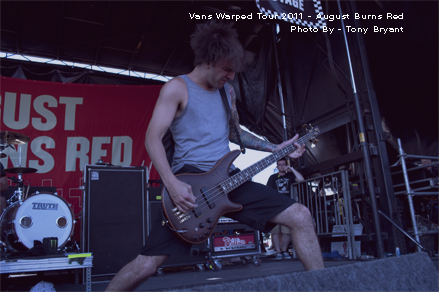 Merchandise is always a big part of the experience, and every band, label, and clothing company has tents to buy merchandise. Personally I like to go to the actual label tents to see what deals they have like Rise Records was selling all their CDs for $5, including old and new. This always provides a way to go buy a CD I might’ve missed and to find new artists. The clothing companies have all kinds of shirts, shorts, wristbands and more for sale, and are always looking to get their name out. Normally an album can cost 10-12$ on iTunes or in the store, assuming you buy them. Shirts can cost anywhere from 10-25$ online, at Hot Topic or a concert. But on Warped Tour you can get deals like a t-shirt and album for $25. 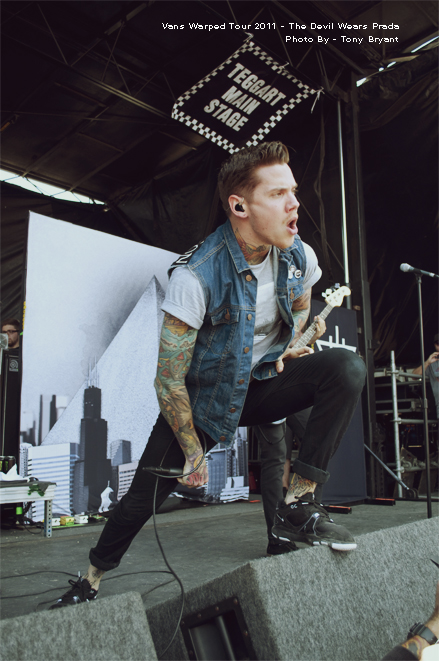 There is also another part to the Warped Tour that many are aware of but do not think about in the big picture. The personal meet and greets. The bigger bands have specific set times to do meet and greets where you have to stand in line to get an autograph, say thank you and get a picture and you’re gone. By this time you have missed at least three bands perform. Depending on where you are in the line, and who knows how long you have waited, so even though it is only going to be 45 minutes of meet and greet you have been in line for an hour and half before. That is over two hours you could have been wandering around, watching other artists. Two things about this, first do what I used to do in my younger days, find out what time it ends, not start. Luckily it is not a movie theater and you don’t have to worry about bad seats. So you can show up around the end of the time and probably get a better spot in line, and didn’t have to wait for it. Second, the smaller bands do not have the PR the bigger bands do. Which means they hang out at their tents. I have met many bands over the course of my years at Warped Tour this way. Even though only some of the bands have remembered me, I didn’t have to wait in a long line and I was aware of who they were before many others. For instance, I watched Underoath on a small stage in San Francisco back in 2004, liked what I heard and went to their tent, where I got meet most of the band. Some of the bands that I have has experience with doing this is Haste the Day, Alesana, As Cities Burn, Scary Kids Scaring Kids, and now recently Sharks have all spent time with me, talked to me about their band, music and products. 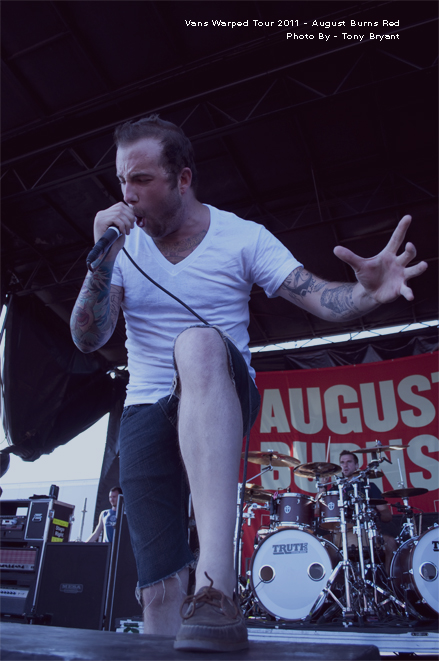 Less Than Jake is one of those bands that are good to see live, because it is always a show. Taking into consideration a lot of bands use computers to provide the synthesizer or echo effects, LTJ is all pure talent. They pride themselves on the fact that they are a ska band that plays different instruments and no computers. It takes you back to the days of Big Bands, and Swing bands, all those musicians on stage. Veterans of the Warped Tour, LTJ really got the crowd going early. With typical ska dancing, jokes, and horn instruments LTJ was a great band to start the day out with. 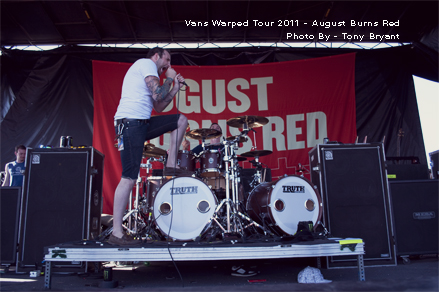 Coming from across the pond, is a UK punk band called Sharks. Sharks are one of the smaller artists on the tour, but are making a push to grab as many fans as they can. The band takes influences from The Clash, Green Day, Operation Ivy and more. Even though they were on a smaller stage that didn’t stop them from using as much space as possible. The band played their songs, and more and more people came to watch. You can see the emotion in the playing, singing, movement, Sharks is a band that is pushing for people to remember them. 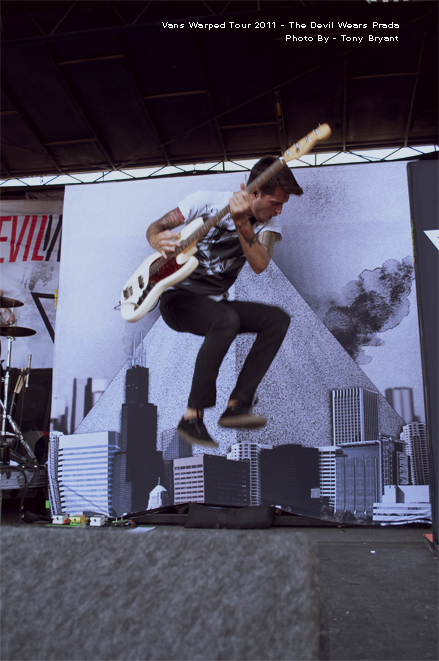 Terrible Things is a band that many might not be aware of. With former members of bands like Taking Back Sunday, Coheed and Cambria, and Hot Rod Circuit this band has a lot of potential. Fred Mascherino (TBS) has put together a group that understands their talents, and seems to genuinely be about the music. Watching Terrible Things on the Ernie Ball stage was at first awkward to see musicians of this caliber on the small stage, but enthralled in the moment. It reminded me of watching acoustic artists at a coffee shop, only it wasn’t a college artist, it was Terrible Things, and it was not a coffee shop, it was the Warped Tour. But the feel, the crowd, and the music were all in sync with each other, creating a great atmosphere for it all. 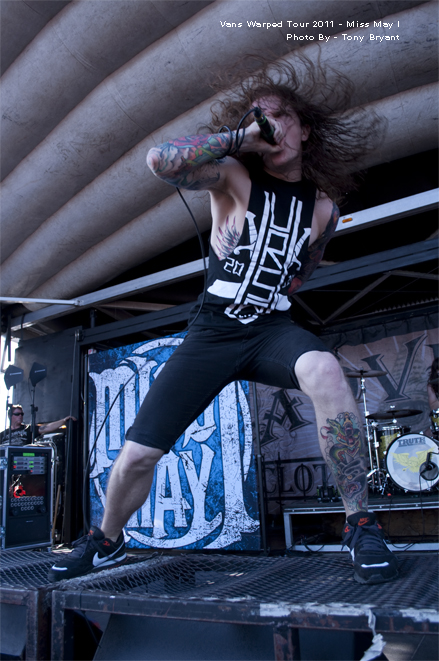 Even though the smaller stage usually meant a smaller audience, Miss May I obviously either did not get the memo or completely disregarded it. With a crowd to rival those of the main stage, MMI was throwing down their best. A band that has toured with Blessthefall, The Devil Wears Prada, and Greeley Estates, MMI had fans screaming, moshing, and hitting all the sing-a-longs. MMI was bringing the metalcore to the small stage in all the best ways. What seemed like a more personal experience then the main stage, the band even shot out shirts into the crowd like it was a sports event. Screeching guitars, a stampede of kick pedals, it is no wonder why everyone is flocking to this band. 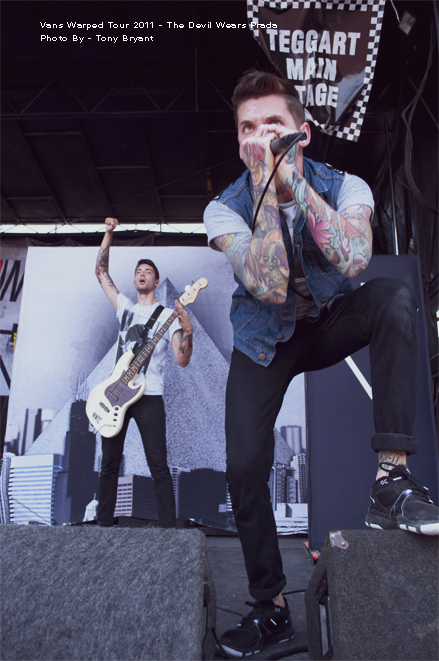 PRADA!! PRADA!! PRADA!! The crowd starts cheering as the new set for The Devil Wears Prada is unveiled. TDWP seemed to time everything just right. With the new album on the horizon, a new set and a run on the Warped Tour, what more could they ask for. How about thousands of fans still chanting PRADA!!! PRADA!!! PRADA!!! After fifteen minutes with no sign of giving up. Then it became silent, like everyone knew all at once it was time, or maybe it was just the guy giving the thumbs up. When front man Mike Hranica came out, the chat of PRADA!! was no longer there. It was just screams, cheers and a smile from all the members of the band. It is always nice to see a band that can reflect on what it used to be and where they are now. The smiles said it all. Mike took one glance around the stage as if to say lets do this. TDWP was on, technically everything was great, the sound guy did great, no troubleshooting issues, it was a near perfect performance. TDWP came out to make sure everyone knew the time is now and it is their time. 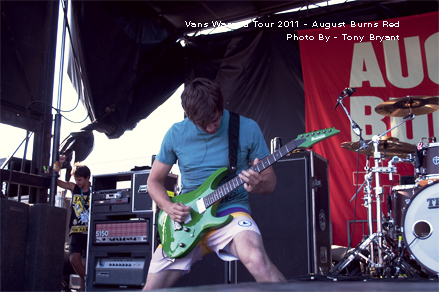 A few days earlier front man Jake Luhrs of August Burns Red got some tattoo work done. With ships, water and sharks in the water. I wonder if he was planning on seeing something similar a few days later. The crowd was pushing, shoving, and waving before the band even came out. A sea of people moving around, till ABR took the stage. It looked like a storm had hit the sea and the stage was the ship, the only safe place to be. ABR was ready, with an amazing performance from fellow Christians TDWP they were not about to be forgotten. What quickly turned into a race to the finish for best band of the day, ABR came to make a statement and made it clear they do not plan on going anywhere anytime soon. Playing songs off the new album Leveler and giving the fans a small taste of things to come, and bringing it home with classics from their older albums. 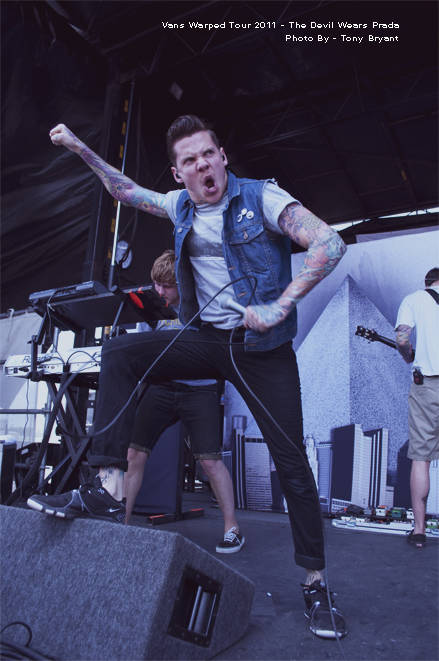 The headliner of the night was A Day To Remember, with most of the crowd exhausted from the day’s events; ADTR didn’t hesitate to bring them back to life. With their trademark breakdown and melodies ADTR showing everyone what popcore is about. The Florida based band, has captured the nation with their breakdowns and pop-punk choruses. That was apparent as front man Jeremy McKinnon had a smile on his face the entire set. The crowd was singing the entire set, and when it came to a chorus or a sing-a-long, the crowd would explode. Not to mention breakdowns to rival some of metals best. With songs that are based on heartbreak, homesickness, friends, family, fame, responsibility, and just being themselves. ADTR has not forgotten where they came from, or how they got there. They fought their way to the top of the mountain, and they do not plan on coming off anytime soon, but they do want their fans and friends with them.