Tommy Green lives in Salt Lake City Utah with his Wife, Krissi, and his three kids. He spends his days as a pastor, itinerant preacher and church planter, and also yells for people as the vocalist for Sleeping Giant. View all posts by Tommy →

‘We visited the killing fields.’ 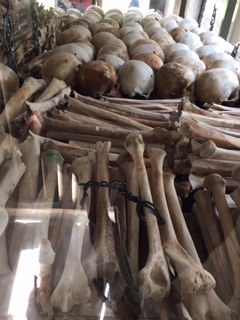 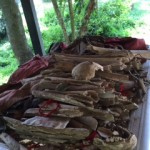 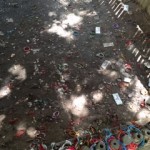 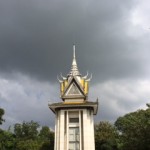 We went to the killing fields of Cambodia.

Starting in April 1975, just outside of the capital of Cambodia, Phnom Penh, tens of thousands of individuals — men, women, children, of all ages — were brutally murdered under a bloody regime known as the Khmer Rouge. It. Was. Horrible. Imagine taking an established walking path around lakes and through meadows, but instead of simple rocks and pebbles and grass and sticks littering the path, there were small pieces of what look like torn fabric, small ivory colored pieces of teeth, old shards of bone.

It was a picture of Cain and Abel. When it rains each year, more clothing, teeth and bone bubbles up from the ground, literally, “Your brother’s blood cries out to heaven from the ground.”

I was in shock. This nation, along with most of Southeast Asia, was progressing in almost every way. Countries like Taiwan or Singapore have poverty, but they also have progressive downtowns with major metropolitan areas. They’re right on track to contribute to the worldwide community, to give gifts of ideas and creativity and create and export marketable things.

But Cambodia had their country reduced to zero. Forty plus years ago, this place got taken back to the dark ages and they still haven’t recovered.

As we walked the path, I could see the evidence of this tragic theft of destiny, of family and of life. It was gutting. In the midst of a very personal and private process of shock and anger and sadness, I was interrupted consistently by these sounds.

You see, when you walk the killing fields, they give you a headset with a lanyard attached to a box that plays a menu of narratives, like a book on tape. Except instead of pages in a book, it has small demarcations for different buildings or for a pagoda or a spot of land where something crazy happened; the speaker on your headset narrates as you go.

You can spend as much (or as little) time listening as you’d like. In the midst of my headphone narrative pausing or changing tracks, these noises kept ringing, almost thunderously through the mourning silence of us tourists taking this small journey together.

I eventually took off my headphones and stopped. I was hearing a group of schoolchildren on a playground just down the road from my spot. This group of kids was laughing and there were sounds of play and sounds of joy and games. I began to cry.

There was an IRA participant who died in the hunger strikes of 1981. He had a famous quote I have long since valued: “Our revenge will be the laughter of our children.”

The justice of heaven towards Cambodia, in my opinion, is the power of the indestructible life of Jesus Christ, manifested in the children of Cambodia. Generations continue. Life goes on. The life of man is the light of God, and these children hold the keys. They will have better than what their grandparents experienced. They will have more than what their parents had, and Jesus will lead them into victory. They will get to live, and that is the justice of God.

Hell has one agenda, and it’s a given: to steal, kill and destroy. But God overcomes death with life. The encouragement of hope, previously stolen from their parents and grandparents, continues on in the lives of these young ones I can overhear. The true vengeance of God is that children can laugh where there was once weeping and gnashing of teeth. These children will live on in the face of their country’s tragedy, but in that realization, I bear witness to Jesus’ overcoming.

I now smile as the vengeance of Cambodia lies in the laughter of its children.