February 18, 2011 – (Chicago, Ill.) – It’s always interesting to see how people react when one or more members of a popular band spin off another similar band. Guitarist Adam Dutkiewicz and vocalist Jesse Leach, currently and formerly of Killswitch Engage, respectively, recently released their debut album as Times of Grace, The Hymn of a Broken Man. Exactly a month following its release, the crowd at Bottom Lounge in Chicago already knew all the words.

War of Ages played first, quickly getting the floor moving with “Through the Flames” and keeping fans singing along and wagging their fingers in the air during solos on favorites “Strength Within” and “All Consuming Fire.” 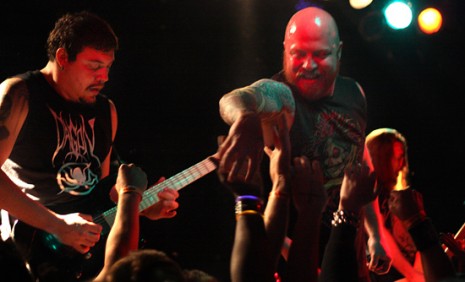 Vocalist Leroy Harp encouraged the raucous pit often, getting the already packed room to clap along and open up circle pits. 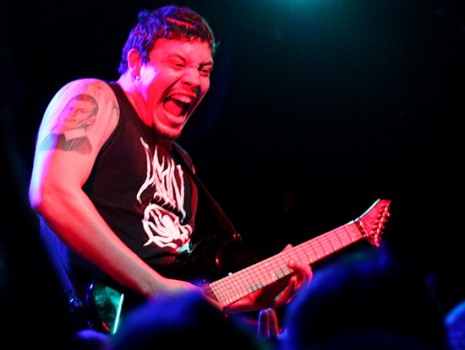 Straight Line Stitch vocalist Alexis Brown immediately contrasted with Harp’s interactive style, sticking mostly to the middle of the stage and facing away from the audience, whipping her long hair around as she screamed into the mic. She moved around a little more as the crowd began to respond, but it was obvious few in the room were familiar with their songs.

The energy shot up noticeably as Leach and Dutkiewicz’s familiar faces bolted out to take their positions at the front of the stage. As the Soviet military march-esque snare and AK-47 burst guitar pattern of their opener “Strength in Numbers” sounded, the urge to headbang along was impossible to resist. If you weren’t moving you probably should’ve been quarantined because you’re likely a brain-dead zombie. But no worry, the fans next to you pushing you toward the stage and grooving to the beat would’ve quickly snapped you from your slumber anyway. 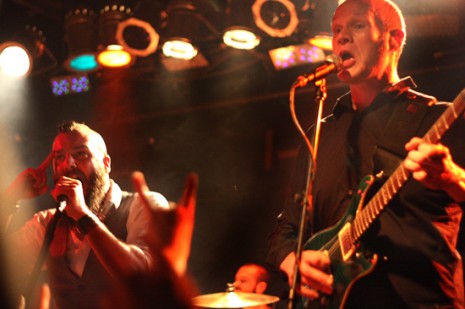 Times of Grace’s sound is hard to categorize; it’s similar to Killswitch’s metalcore at times, though it varies greatly from song to song and even within songs from slower Southern rock to harder groove metal. There were times the audience nodded along silently, transfixed, and others where the pit bordered on dangerous for everyone involved. They sang along often, producing one of the most deafening rooms I’ve ever been in. (Keep in mind, this is tour number one for ToG.) 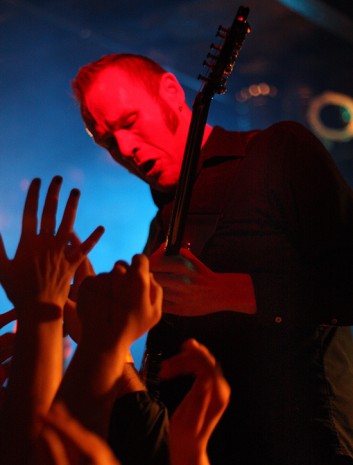 It’s well-noted that Adam D. is a captivating personality onstage. He didn’t disappoint with his pithy one-liners. But he’s also renowned for his production work, having helmed albums from Norma Jean’s Bless the Martyr and Kiss the Child to Underoath’s Define the Great Line. His technical mastery is evident in how he plays the guitar live. He alternated between a traditional six-string and a rarer seven-string, achieving impressively meaty tones as he wrenched its neck violently as if he was trying to strangle a wild animal. During “Live in Love,” he plucked his solo on the neck with the fingers of his left hand while he held his right to the sky. 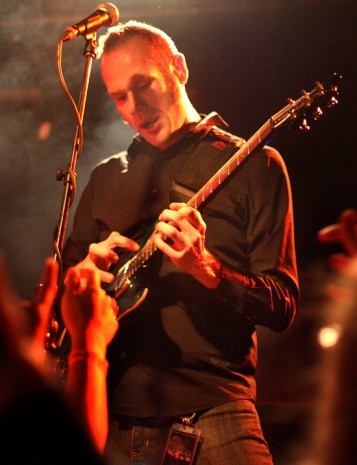 The pain in the introspective lyrics showed on Leach’s face as he sang of his personal demons on “Until the End of Days.” He screamed so hard at one point that he had to double over in front of the drum kit either for effect or more likely because he’d exhaled every ounce of breath from his lungs. 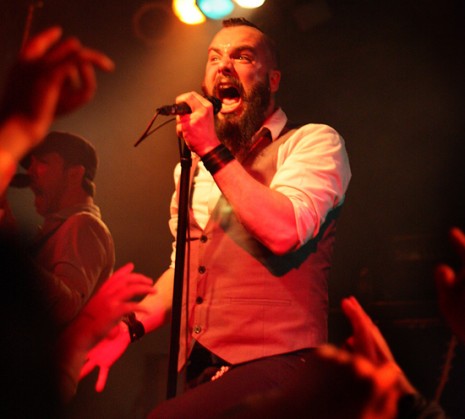 If Dutkiewicz’s antics served to stir up the crowd, Leach’s weighty lyrics and genuine expressions of gratitude for the overwhelming crowd response gave their set a decidedly serious vibe. Jesse shared that he and Adam weren’t sure if they’d ever tour in support of this album so they didn’t know what to expect. Already after only three songs he said it was their best show by far, which I have a feeling will happen often as more people discover the album.

HM editor Doug Van Pelt mentioned they weren’t completely together during their set a couple weeks ago in Austin and that you could tell at times that that night was only their fourth show ever. That’s not the case anymore. On this night they were as tight as on their album, which is considerable since Adam D. recorded every instrumental part on the recording, meaning touring members Joel Stroetzel (also of KsE), Daniel Struble and Dan Gluszak were performing parts they didn’t write. 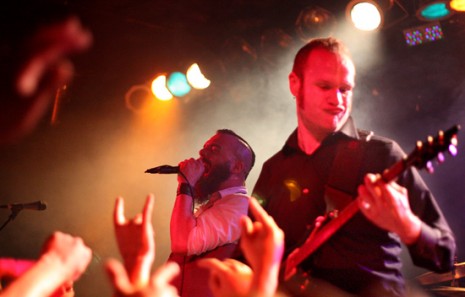 After their hour-long set and following their finale, “Where the Spirit Leads Me,” drummer Gluszak came back onstage to tear down his kit to screams for one more from the crowd, to which he mouthed, “we don’t have any more!” Even sans encore, Times of Grace put on a thoroughly satisfying performance. This likely isn’t a side project that will come around often, so see them while you can.