The Myriad To Tour 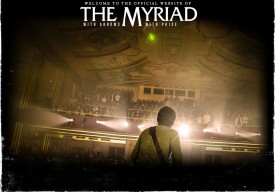 Seattle-based band The Myriad is back after nearly a year long hiatus to tour with Tyrone Wells (Universal Republic) and indie darling Matt Hires for The Humane Society of the United States “All Creatures Great and Small” campaign.

Since November 2008, drummer Randy Miller has been fearlessly fighting stage 4 cancer, and since the group operates more as a family than a band, they chose to stay home and help support Randy however they could. With the blessing of Randy’s doctors, the band is able to get back on the road and get reacquainted with their fans all across the country.  Randy, however, will have to return to chemo the same day the band returns home.

“This has, without a doubt, been the most uncertain year of The Myriad,” explains singer Jeremy Edwardson. “Last fall we made a decision to put down our instruments and wait with our drummer Randy as he began his fight with cancer. It would be 8 months before we all played in a room together again.  That was a few weeks ago.  We didn’t have an agenda.  There was no “let’s write an album to change the world!” conversations that we had shared in the past.

“The gathering was more about our friendship than the music we had shared. Randy was between chemo visits.  He had just finished another week in the hospital and was starting to regain his strength.  We were prepared to take breaks, leave early, etc. as his body would allow.  We had no idea that Randy would actually prove to be a better drummer than we had ever seen in the past. He was secretly immersing himself in drummer videos and practicing at least an hour a day. He later told us his fight, his battle, was more than beating cancer.  He wanted to come out a better husband, father, drummer, and ultimately a better man of God.  This rocked our world. After a week of hanging out, jamming, laughing, crying, we walked away from rehearsals songless, but with a fire brewing for something more.  Something we could feel deep in our bones.  The feeling of something new – something big.  This fall tour with Tyrone Wells has allowed us the opportunity to sort it all out as we travel across the country.”

When the opportunity arose to get back on the road for the “All Creatures Great and Small” campaign, the band jumped at the opportunity.  Steven Tracy, guitarist for the band, was quick to want to sign on to the tour. “I’m really looking forward to being apart of this HSUS campaign. It’s something that I’ve felt strongly about for a while now. Factory farming feels like one of those topics that future generations will hopefully look back on as the way things ‘used to be’.”

The Animals & Religion program of The Humane Society of the United States seeks to engage people and institutions of faith with animal protection issues, on the premise that religious values call upon us all to act in a kind and merciful way towards all creatures. It aims to increase awareness about our moral responsibilities to all animals and the environment, and encourages active support of animal welfare policies. More info at humanesociety.org/allcreatures

Steven continues, “Plus, we’re excited about the tour with Tyrone. This has been a year of change for The Myriad, and we’re looking forward to the opportunity to try out some different things and explore some new territory. There is always something fun about touring with an artist that you’re relatively unfamiliar with. There are loads of opportunities to meet new folks and make some new friends. Some of my favorite memories have been late night conversations in the back of a bus or van with an artist I just met. Touring is always ripe with those moments.”

Always striving to be as much of a musical vision as a band, The Myriad consistently draws rave reviews from both fans and critics worldwide.  Handpicked out of a survey of 4000 bands by music critics at MTV, the band won the prestigious MTV2 Dew Circuit Breakout competition, after several million fan votes were cast. The band’s video for the single “A Clean Shot” was the most played video on MTV in the spring of 2008.  “A Clean Shot” was also released on the video game ROCKBAND for Xbox and Playstation.  The Myriad also filmed MTV promos like “Discover and Download” and “Artist of the Week” throughout the year to promote their latest release “With Arrows, With Poise.”

The band has toured extensively, playing with bands such as David Crowder Band, Eisley, Switchfoot, Third Day, Jeremy Camp, Phil Wickham, etc, and has quickly earned a sing-along relationship with fans everywhere: a connection founded more on captivating performances than on-stage antics. Creative melodies evocative of at times Kent, at others Bjork, are delivered with the grand musical scope of The Verve and Radiohead.

“All Creatures Great and Small” Tour

with Tyrone Wells, The Myriad and Matt Hires