TGIF Exclusive Interview: I Am Alpha And Omega 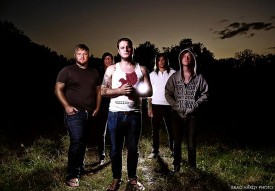 So, one of my best friends – Gage Speas – (whom I believe you toured with for a while when he was singing with Oh The Blood…?) got a tattoo on the top of his hand that says “The War I Wage” – commemorating your album. Can you tell me a little bit about that EP? What is “the war you wage” – and what is the content of that record, lyrically?

The EP really centers around spiritual warfare. The fact that we are born fallible and the beauty of God’s gift of free will leave us each with a war on a daily basis. The album title refers to the war within ourselves to either do what we know is right and will exemplify Christ, or to give in to our sinful nature.  Each of the songs on the record are either about that struggle or the joy that can be found in being sons of God and having the power through Christ to overcome.

I feel like I heard about/heard random people mention/happened to catch conversations about you guys so, so, so, SO long ago (I won’t say how long, because I could be 100% off the mark – but you get the point). How long have you guys been IAAAO? How have you seen yourselves progress since you started the band – musically, relationally, and spiritually?

That’s actually a tough question. I can say the band existed in 2005, but we really didn’t get off the ground as the ministry God had planned until 2007. We were doing it really for fun. After playing out a lot, more serious offers came up and we were forced to choose a path for the future. God has used IAAAO to grow us into men and to draw us into Him. This is no longer a band, its the representation of answering the calling to serve others in the name of Christ.

I’ve interviewed a couple other Come&Live! artists since we started doing these weekly interviews, and every time I hear from them, I’m so excited to see what the Lord is doing through that ministry, and to hear what the bands have to say about it, and to hear what the Lord is doing in their specific ministry within C&L! Can you please tell me a little bit about your experience? How did you get connected with them? How have you seen the Lord work through your decision to partner with that label/ministry?

Ultimately, God used that time as a catalyst to call me to something greater. Our drummer (my brother Peach) felt we needed to get serious and look into making IAAAO full time and start touring. At the time, I was in a career working 50 hours a week and had a wife at home in college. I had every intention of quitting. But after telling my wife, God spoke directly through her. She looked at me and said, “Your making decisions without talking to God.”. At that point in not only my life but all of our lives, I feel like we were “stagnant Christians”. We just were going through the motions hoping to blend in. After fasting and praying for a week, God laid it on our hearts to join in the calling of ministry work in IAAAO.

After touring 240+ days in 2007-09, we had to reflect and consequently said no to a handful of labels who were all great people, we just didn’t have a peace from God about it. We actually weren’t sure why. By God’s perfect work and plans, we ended being indirectly being hooked up with Chad through multiple friends. We had plans to try to do ministry work on our own. Little did we know God had already stirred Chad’s heart. Everything just clicked. Being a a part of Come & Live has been amazing. It’s been the biggest confirmation in our ministry. Come & Live is about love, brotherhood & authentic world changing ministry.

There are fifty bazillion bands popping up every day – you can’t read a music magazine one month and expect to find the same bands – or even an update from the same bands – in the next issue, because by the time the month has gone by, some other artist is huge and blowing up and the last band is yesterday’s news. (Obviously, that’s a relatively pessimistic look at things, but sometimes it feels so…) How have you guys maintained your longevity? What have you done to push through the oceans of artists that are here and there, now and then, coming and going – and stuck it out to keep on progressing and moving forward?

In my opinion, we are not amazing musicians by any stretch. There are countless bands all over this country that are musically far better than IAAAO. I do know that the place where our music comes from is real. Our hearts are not only over-flowing with admiration for Jesus who died to rescue us from utter brokenness, but that love and worship pours out on every record and stage we play on. We play to serve others and to be real those we meet. We believe as long as those elements stay true in us, the rest is for the Lord to carry.

How do you guys plan out tours? I’ve heard rumors of ya’ll just self-booking everything. Is that true? Do or have you guys run through an agency? If yes – that makes sense. If no – why?

Up until now, we have largely done our own booking, simply because it’s been quickest and easiest. We are currently weighing a few options regarding booking. Our short-term goal is to relinquish all booking to an agency.

You have “Church at a Distance” up as one of your top friends… What is that? I’ve heard the name, and maybe a brief description… could you talk about your connection, what they’ve done with/for you, and how they’re a blessing to bands on the road?

Church at a Distance is an organization born out of the Anchor Fellowship in Nashville. Their goal to provide pastoral care and support for bands, touring and local. Their team is committed to going out on the road with bands to support them and keep watch over them. We met Joe and Sara while playing at Cornerstone Festivals Anchor stage in 2007. Ever since we have maintained a close relationship with them. Joe has been our tour pastor for about 6 months now.

So I’m gonna ask an “old person” question that I’ve been asked recently about some of my stuff – and I don’t mean “old person question” as an offensive thing… more as a funny thing, but a thing nonetheless. Here goes: Why? Why do we tour and make next to nothing and struggle to get by and not really have homes and get dirty and miss home but keep on leaving it? Why do you guys do it?

That is a really good question. I guess, without thinking to in-depth-ly, I would say you would do it for one of two reasons. Either to try to “make it big with your band” or to serve God.

I’d like to think that it is possible to make your dreams into realities. Think back to the dreams you had as a kid… what did you want to be when you grew up? And now… are you doing it, or are you happy with the change of direction? Do you think that IAAAO is a representation of you following your dreams? What do you think are the main things that cause people to abandon their dreams and settle for less than they want to do/be/whatever – and how do you fight that?

When I grew up my “dreams” changed every five seconds, haha…might have been the ADD. If you had asked me at certain spiritually weak points in my life if this was my dream, maybe not. I mean I always have loved music, its been my life. But I wanted the things the world can give you. (house, insane cars, PH-AT bank account). But I can honestly say now that this is a dream come true. To have the privilege to love people through Christ and worship at shows every day with the hope of Gods presence during our set of positively affecting kids, absolutely.

I’ve asked the next few questions of a few bands recently, and I think that I’m going to continue to ask them in every interview, because I feel like they deal very much with a heart issue in individual/band life… first: When did you decide to become a Christian? Can you tell me about your life – a testimony of sorts?

I grew up in a Christian home. My grandfather is a retired pastor. My parents raised me to love God with all of my heart. I thought I knew God and had a standing relationship with Him. My mom got sick when I was about 16 and basically suffered a doctor prescribed addiction that made her mentally crazy. I fell into self-pity and self medication with drugs and alcohol. In fact, my brother fell into drugs harder. I hurt so many people in that time, including my girlfriend (who is now my wife). At about 19 it peaked, and it was in that despair and self loathing that God loved me deepest. I came to the realization that I was destroying myself and our God loves so much and so hard, that it was all actually worse for Him. I would say I really started my relationship with God at about 19.

Secondly, I think that one of the most interesting things about becoming someone that people know and recognize is the idea of influence. The fact that, suddenly, people relate to or scrutinize or agree with or criticize your opinions and viewpoints, and that spotlight becomes ever brighter as you gain more fans, etc. Is it difficult knowing that you are under the radar at times, so to speak, and how have you seen yourselves grow and mature as musicians and as examples that people look up to and recognize?

If I focus on the world, that will bother me. Sometimes, I let it. But really, we know we are answering the calling God put on us. We need to maintain faith in that obedience and really let go. The bible tells us we are to be in this world and not of it. Wherever he has and however many people are there, that’s His plan.

What are the future plans for I Am Alpha And Omega, and how can fans/readers/whoever be praying for you guys as you continue?

We actually have just started 2 weeks of pre-production for our full-length “The Roar and The Whisper”. We start recording November 9th and will be released in the first part of 2010. After that, we are scheduled for about 200 tour days in 2010. We would ask for prayer for continued strength and for protecting against the works of the devil, as well as for continued growth in the support of Come & Live!

Thanks so much for everything, man. J