After a couple missed opportunities, I was able to take in a couple final screenings of two music-related movies on Saturday, March 19. One was SXSW’s own documentary (Outside Industry: The Story of SXSW), which was inspired by the fact that this was their 25th year as a music festival/conference. It was fun and fascinating to see the chronological line of visuals and stories that began back in the very early ’80s when a few guys convened to launch a local entertainment paper called The Austin Chronicle. Launched with hardly any money (save for a gift by one of the guy’s moms, who was a Miss America from the ’40s) and spent in less than a year, the paper quickly grew to become a staple in the restaurant and club “district” that exists all over town.

On a side note, it seems as if Austin has more restaurants per capita than any city in the world.

One of the smartest guys in the bunch, Roland Swensen, was also a musician. He moved up to New York and went to the CMJ Conference to help his band. While he was able to book a gig for his band that paid for his registration at the annual event, he left feeling cold and wanting. They wanted something that would help outsiders get a glimpse of the inner workings of the music industry – to give the small guy a chance at making it. This helped to spawn the creation of what has now become the world’s largest music conference. Now it’s become a monster that is as “inside” the music industry as “outside.” 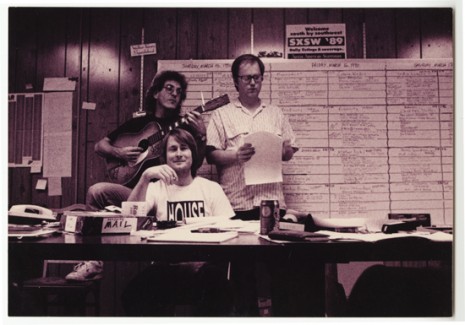 In the words of co-founder, Louis Black, “No one is in control of this thing,” yet it is practically a vital experience to anyone seriously involved in the music business now. With tons of archival footage and fun narrative, the documentary moves fairly fast through the last 25 years. The director, Alan Berg, insisted on autonomy in making the film, even though he was invited by the conference to make it. He did a great job of presenting a balanced piece that covers the problems and the triumphs of the annual event.

Afterwards in the Question & Answer time, Berg was asked about the musical footage that was left out. He mentioned how much would be used for DVD bonus footage and how it was agonizing to cut some of the performances. “If you’re gonna work at the pound, you’re gonna gas a few puppies,” he said, which elicited some conflicted and awkward laughter.

The second film I saw right after the first was Taken By Storm: The Art of Storm Thorgerson and Hipgnosis. This guy and his company are responsible for the most iconic album covers (a lost and dying art, unfortunately) of the rock and roll era. Think of the greats (Led Zeppelin, Pink Floyd, Audioslave, The Mars Volta, Scorpions) and his artwork was a huge part of the overall impression of their albums. The story of their humble beginnings and some insight into how the art genius worked is told in vivid detail. The guy was never too much into computer-generated graphics (i.e. “faking it”), so many of the photographs used were huge undertakings – like the flying pigs over the power plant on Pink Floyd’s Animals album, Pieces of Eight by Styx or the 700 beds lined up on the beach for Pink Floyd’s A Momentary Lapse of Reason. Much of the film showed the artwork, which is so awesome that you barely wanted to blink for fear of missing something. Fortunately, the pacing is well-timed and it’s an enjoyable experience overall.

Director Roddy Bogawa answered some questions afterwards, including one that talked about his positive experience of using kickstarter to help fund the film. He also mentioned that his decision of using 16mm film cameras was noticed. Some of the classic rock stars, who remembered those cameras, like Robert Plant, made comment. “Oh, you only want diamonds out of me…” (meaning they only had a certain amount of film to shoot with, so it better be good … a big contrast against today’s technology, which allows interviewers to let the cameras roll and the subject can just talk non-stop and go off).

On the last vital day of the fest I made sure I popped in on the newest addition to SXSW – Style X. Besides a few panels, some “Shop Hops” (chauffeured trips to local boutiques) and red carpet events with models and fashion design, there was also a giant tradeshow-like room with lots of vendors and an Alternative Apparel factory flea market, allowing great deals on their soft-material designs. The event put together a Style X Look Book, which is available online. 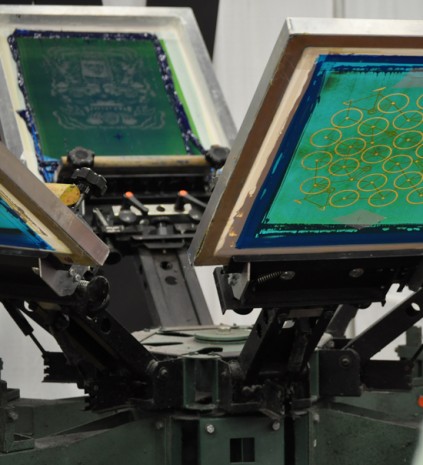 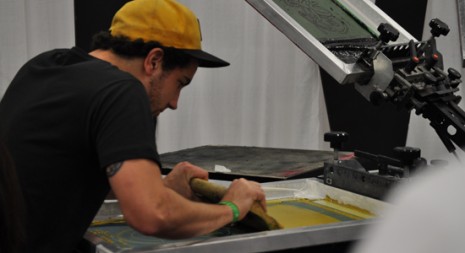 Folks could buy blanks and get free screen printing while they waited, and there was lots of interesting fashion accessories to be looked at or purchased. I liked the hats by Fur Face Boy. 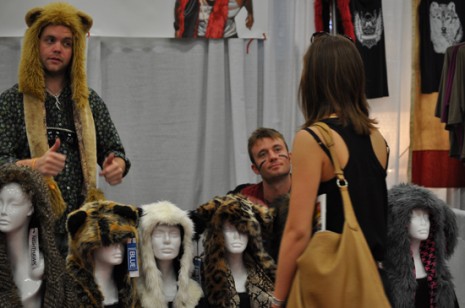 Also housed in the Austin Convention Center was Screenburn – a display of gaming ware, new games, accessories, refreshments and an opportunity to play old and brand new games on giant consoles and screens.

There was also the Gear Alley Expo, with lots and lots of musical instruments, accessories and jamming. I didn’t see any “No Stairway” signs posted, but I did see lots and lots of guitars. I was able to pick up a nice 20′ guitar cable for $5. That’s the kind of special I’ve been looking for. 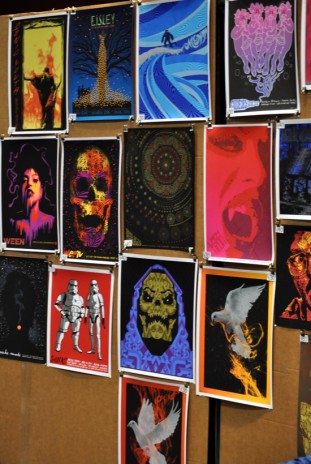 Flatstock is always a worthwhile visit – whether you want to take a stroll and feast your eyes on some great rock poster art (like a museum stroll) or collect some one-of-a-kind hand-numbered screen prints. Our old HM staffer Lonny Hurley used to always get a booth at this thing. Didn’t see him this year. 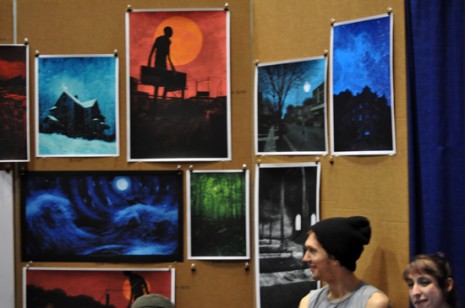 It’s funny the looks you might get when you whip out a camera. “I’m gonna rip off your designs, dude!” is what I’m thinking, but nobody really gave me a second look. I wanted to tell one guy that stepped in front of a shot and apologized, “It’s only fitting that the publicity I give your booth would have the artist in the shot, too.”