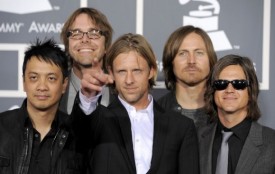 Switchfoot’s seventh studio album, Hello Hurricane, received a GRAMMY Award yesterday for Best Rock or Rap Gospel Album.  Released November 10, 2009 on Atlantic and Credential Records, Hello Hurricane bowed at No. 13 on The Billboard 200, gathered two Top 10 Modern Rock radio singles with “Mess of Me” and “The Sound (John M. Perkins’ Blues),” and launched the band onto all the major late night network shows as it continues to gather widespread critical acclaim.  Paste Magazine declared “Hello Hurricane will rock you like a…well, you know…” Alternative Press calls the record “a hope-giving affirmation of resurgence from a band who might have been down but were never out.” Rolling Stone says, “The group added some heft to its super catchy alternative rock,” while Relevant Magazine calls the recording “one of the best albums of Switchfoot’s career.”

The band is currently in the studio working on its highly anticipated new album slated to release later this year.  Widely known as one of the most exciting concert experiences around, Switchfoot will reveal new music on its upcoming April/May international tour to Australia, Malaysia and the Philippines, as well as on its 10-city major market Canadian tour. Switchfoot’s Jon Foreman will also open up the San Diego State Aztecs vs. BYU Cougars basketball game with the national anthem on Feb. 26.  For a list of all current tour dates, a behind-the-scenes clip of the band in the studio working on the new album and more, go to www.switchfoot.com.

Switchfoot also announces its 7th Annual Bro-Am charity event to be held On June 18, 2011 at Moonlight Beach in Encinitas, CA.  A surfing event, concert and auction hosted by Switchfoot, the 2010 Bro-Am brought out over 7,500 people and featured surfing champions Tom Curren, Rob Machado and Timmy Curran, among others, as well as raised over $130,000 to benefit Stand Up for Kids (www.standupforkids.org), a national nonprofit volunteer outreach organization dedicated to making a difference in the lives of at-risk, homeless and street kids.  This year’s featured guest surfers and bands will be announced soon.

Switchfoot’s commercial successes, including 2001’s A Beautiful Letdown going double-platinum and sparking two gold-certified singles, “Dare You To Move” and “Meant To Live,” are matched by the band’s myriad of philanthropic efforts:  They have worked with Habitat For Humanity, The ONE Campaign, Invisible Children and John M. Perkins Foundation for Reconciliation and Development, as well as hosted its annual Bro-Am. The band has also teamed up with Causecast and Music for Relief, offering “Red Eyes” from Hello Hurricane as a free download in support of the relief efforts in Haiti.  To make a donation and receive the free song, text RELIEF to 41010 or visit downloadtodonate.org.

For more information on Switchfoot, go to www.switchfoot.com.