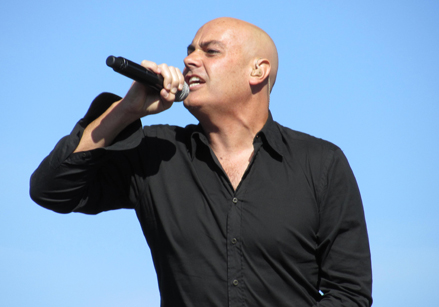 There were about 12,000 people on hand at the Dell Diamond ball park for the first annual Spirit Fest.

Peter Furler: Former Newsboy Delivers
One of the early afternoon sets saw long-time Newsboy frontman and new solo artist take the stage with an entertaining 45 minute show. Peter released his first solo album ON FIRE in June of this year but of the 9 songs played, only 3 were from this album. The rest were Newsboys hits that kept the crowd dancing and singing along. The set opened with his I’M ALIVE, then WHEREVER WE GO followed by the new FASTER AND LOUDER. One of the hallmarks of Newsboys performances of late has been a focus on worship. Peter brought this out with BLESSED BE YOUR NAME and the anthem HE REIGNS which had the crowd in full voice. Then he introduced his band, Jeffrey Rizzoli on drums, Brennan Smiley (son of CCM vet Billy Smiley) on guitar, and for the first time together on stage in five years, former Newsboy bassist Phil Joel. ENTERTAINING ANGELS was next with Phil on lead vocals. The musicians were tight and energetic. The sound was well mixed and powerful. Peter was full of passion and even some quirky, Aussie dance moves. The hit solo single REACH struck a chord with the crowd, as did the dancable SOMETHING BEAUTIFUL. Peter shared words of spiritual encouragement from the heart. For a final song the band ripped into the powerful, U2-like worship rocker I AM FREE. Frankly I wondered if Peter Furler could deliver a compeling set without his former band or massive lightshow and staging. On a sunny, November day in Texas, all doubters believed. 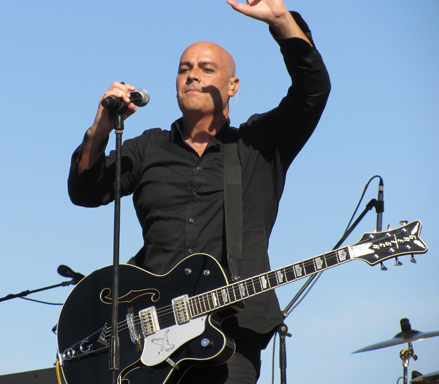 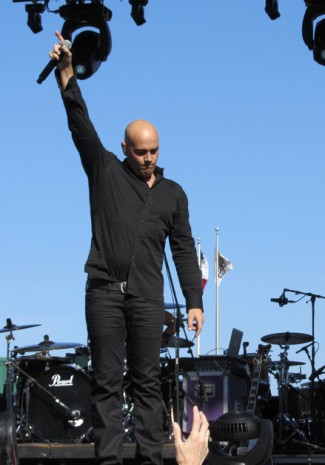 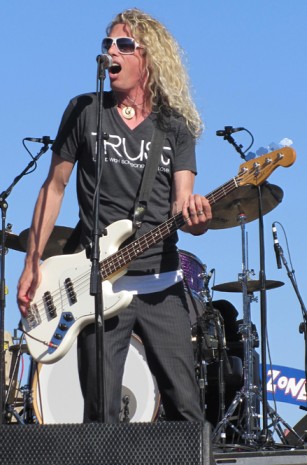 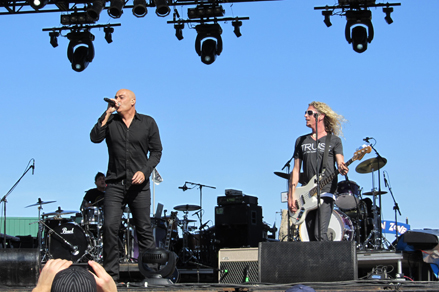 Amy Grant & Michael W. Smith split vocal duties
Armed with a potent and talented band, Amy and Michael performed a bunch of their hits. Amy hit her stride in “Lead Me On,” which extended into some killer soaring vocal histronics by her background vocalists. Wow! Not sure if Amy can’t hit those high notes any more or she just wanted her talented team to shine (and it doesn’t really matter), but it was impressive. Michael pounded out his big keyboard for the tune “Emmanuel.” The pop praise tune still conjured that old feeling for much of the over-30 crowd, who danced and waved their hands in the air. This was deepened by the slower-tempo “Thy Word.” 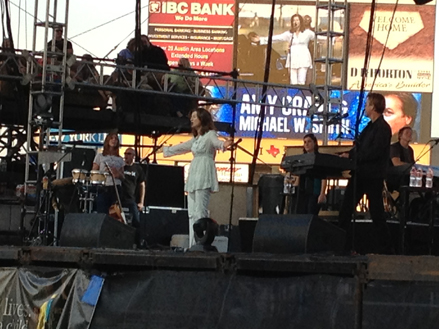 Amy walked off and Michael assumed control of the band and roared through many of his solo hits, like “Secret Ambition” and “Rocket Town.” He introduced one of his new instrumental tunes (from the upcoming Glory album) and prefaced the song by asking for all military personnel and/or veterans to stand up for heart applause from the audience. Quite cool and appropriate for Veteran’s Day weekend. He got the audience back into that praise mood with “Worthy Is the Lamb.” 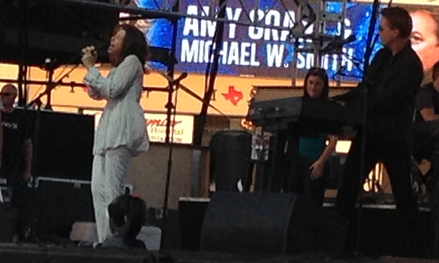 Amy came back out and they sang that old summer campsong of old, “Friends.” Nostalgia ruled the afternoon.

Third Day brought a Southern rock swagger
Early in Third Day’s set the friendly and engaging frontman Mac Powell asked the audience if they wanted to join Third Day. He had everyone interested raise their right hand and he swore them all in, announcing that they were now official background singers in Third Day. The band rocked and swayed with a legitimate Southern rock swagger, attitude and vibe. It was quite glorious and laid-back at the same time.

Mark Lee stood tall as the lead guitarist, even throwing in a few recognizable riffs, like a little “Are You Gonna Go My Way” jam a la Lenny Kravitz. Tasteful, smooth and smokin’ hot. Jason Hoard played opposite him, adding his own leads and playing mandolin and banjo on far stage left. Mac introduced the whole band, which gave much deserved credit to their drummer, David Carr, and keyboardist/organist Scotty Wilbanks, whose Hammond/Rhodes sounds added a rich texture to the band’s sound. Mark Lee brought out a small lap pedal steel guitar for some real tasty leads during that jammin’ “Otherside” tune. A veteran band has a confidence that rolls through a set with little to no awkward moments. Third Day commanded the well-lit stage. It was their show, but they were throwing a party and Powell’s friendly stage banter made everyone feel like they belonged.

“I know it’s a Sunday night and a lotta y’all have to go to school and work tomorrow, but we don’t get here too often, so we’re gonna play a lotta songs and play ’em real loud. We oughta have a lock-in here at the stadium. Someone order a lotta pizza.”

The band did something risky that really paid off late into the set. They brought out traveling tour artist Trevor Morgan with them to perform a song, while they backed him up. Powell gave him a real complimentary introduction/welcome back to the stage and the unassuming singer/songwriter introduced his song “Jesus Rides the Subway.” It was a killer tune that easily could’ve appeared on Springsteen’s Nebraska album. It was gritty, hearty and moving. A polite gesture by Third Day kinda turned into a real set highlight. 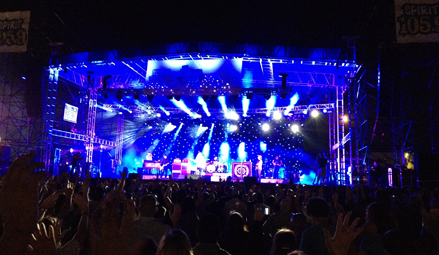 Third Day played a neat version of “God of Wonders” with a starry sky backdrop of lights. It was a powerful way to end their set. But anyone that’s been to a concert in their life knew that the band would surely offer an encore, so they started the “one more song” chant. Bassist Tai Anderson, Mark Lee, Mac Powell and Jason Hoard lined the front of the stage and joined in a four-part harmony that smartly mentioned the state of Texas and it was a dead ringer for an Eagles song like “Seven Bridges Road.” Their vocals were spot on. Then they jammed out on a good old hoe down for the busy tune “Gone.” Then they joined each other arm in arm, took a bow and they were gone.

Certainly a successful start to the first ever Spirit Fest in Austin.