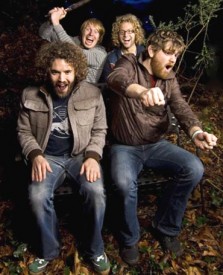 California alterna-popsters Sherwood announce the release of their highly anticipated new album Qu out October 13th on MySpace Records.  Recorded in Los Angeles with renowned producer Brad Wood (Liz Phair, Smashing Pumpkins, Sunny Day Real Estate) the album features 11 original tracks written by all five members.  The result is a refreshingly catchy and precise pop record.  Sherwood will be hitting the road on September 17th when they join Better Than Ezra for some select dates before heading out on a full tour of North America with Hanson, Hellogoodbye and Steel Train that kicks off September 30th at Cain’s Ballroom in Tulsa, OK and takes them through November.

Qu is without a question the band’s most mature album to date and the result of nearly a year of work.  In July 2008 the five members of Sherwood – Mike Leibovich (keyboards), Dan Koch (guitars/vocals), Nate Henry (vocals/bass), David Provenzano (guitar/vocals) and Joe Greenetz (drums) – squirreled away in a rented apartment in Oakland, CA and dove head first into writing music.  Never having this kind of freedom to write, they devoted countless hours each day to crafting song after song, a process which Leibovich says “felt like we were testing our limits and abilities.”  They emerged 9 months later with 85 songs which they carefully narrowed down to 11 before heading into the studio with Wood.

Sherwood first formed in 2002 and following their self-released EP in 2004 they landed on Vans Warped Tour and signed to SideCho Records to release their debut album Sing, But Keep Going in 2005.  It didn’t take long before the band caught the ear of the one and only Tom Anderson of MySpace fame and became the first signing to the MySpace Record family. Sherwood released their sophomore album (and MySpace Records debut) A Different Light in 2007 and the record soared to No. 12 on Billboard Heatseekers Chart, No. 38 on the Independent Albums Chart and has sold 50,000+ copies to date.  In addition, the band is no stranger to the road and have trekked across the states on numerous successful tours alongside artists the likes of Motion City Soundtrack and The Academy Is among others.

Now Sherwood is ready to release their new full-length studio album Qu this fall and is set to make their make their mark on the collective consciousness with this excellent new CD.  Head over to http://www.myspace.com/sherwood for the most current info and accurate list of tour dates.