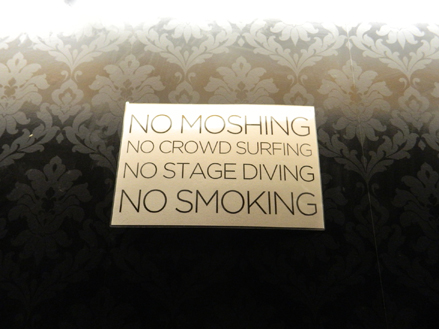 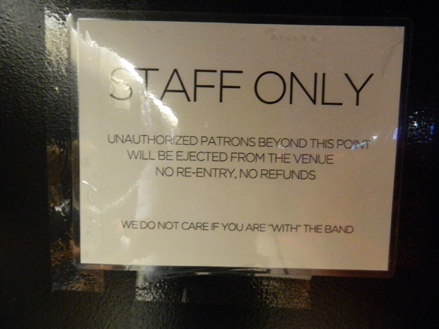 It is that time of year again, summer! What comes to mind are the sounds of sizzling meats on the grill, laughter of children playing outside, teenage girls joyriding blasting the latest Katy Perry hit single and last but not least, brutally heavy music tours. These include Warped Tour, Summer Slaughter and Cornerstone. However, the Scream The Prayer tour will kick things off. 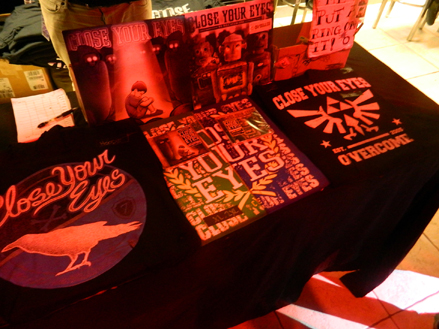 For such a big lineup the venue selected was quite small. At first it seemed everyone would be squished together, but the lower floor opened up since the “older” crowd went to the upper balcony to drink all night. While the stage was still being set up, music fans were checking out their favorite band’s merchandise tables and chatting with the band members. 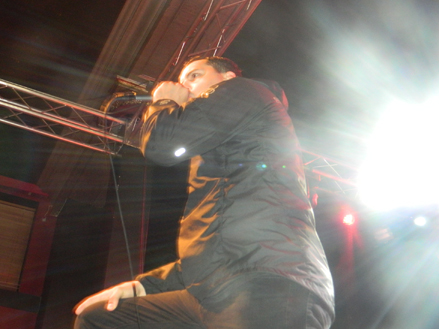 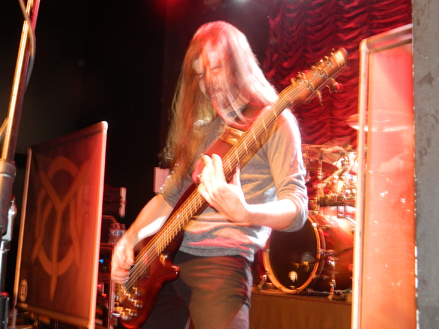 A local Chicago band warmed up the stage for what was yet to come. Although they weren’t on the ballet, the audience applauded and some sang along with lyrics. Your Memorial soon hit the stage and made it known they were there to have a good time. It was though the hammer of Thor was laid down on stage with their opening breakdown. Front man vocalist, Blake Earring, encouraged everyone to sing along and gather up front. After the set, Earring without a microphone spoke to the crowd about the importance of having a relationship with Jesus Christ. 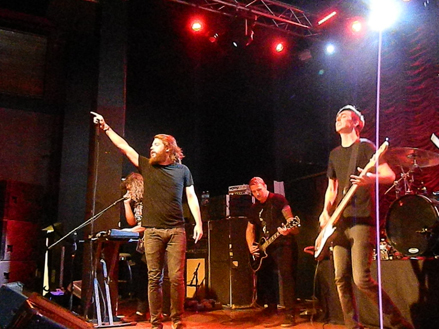 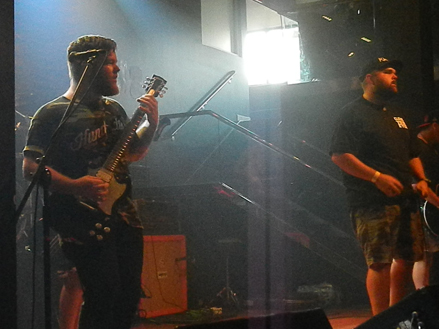 A Bullet For Pretty was next and brought a heavy but calmer mood to the stage. Their presence was energetic and passionate. It was a cool sight viewing their keyboardist, Josh Modisette, being moved by their music. Gideon brought back the hardcore vibe with circle pits and two stepping madness, but it was only just to prepare everyone for The Great Commission who played next. Along with their heavy breakdowns and in synced jumping dance moves, the stage become their own sanctuary. After their set vocalist, Justin Singh, gave a short testimony of his life and what he stands for. 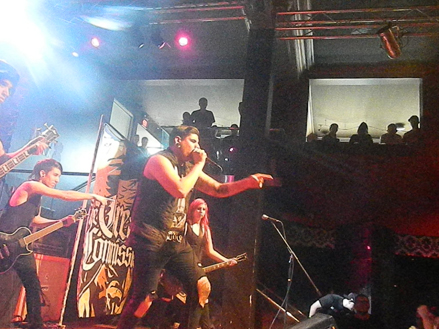 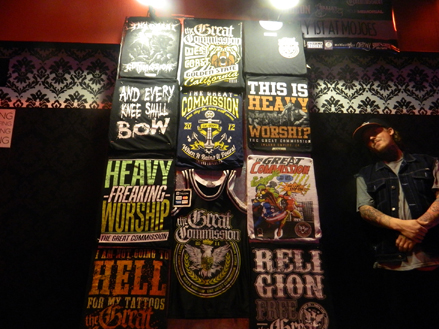 “Don’t ever let anyone tell you heavy music can’t be used as worship!” said Singh. “I’ve been told my whole life that I’m going to hell for liking heavy music and having tattoos, but all that matters is the praise that Jesus hears from your heart while worshipping him.” 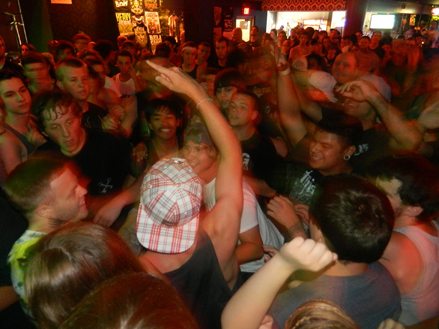 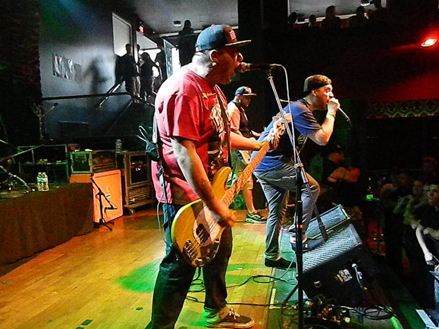 Hundredth came next and straight to business. Vocalist Chadwich Johnson jumped into the crowd and sang the opening song in the middle of the mosh pit. No one person on that stage stood still during their set. Guitars were wailing and it was amazing how Chadwich didn’t snap his neck or knock his eye out from swinging the microphone around his head. More people started to gather for Close Your Eyes which brought a good mixture of sing-along worship chants and gang vocals. However in the middle of their set a fan was dragged and thrown out for having an incident with security. 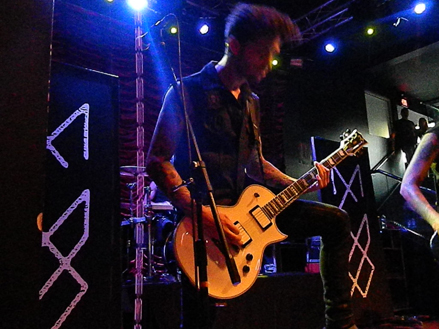 The biggest crowd yet gathered for MyChildren MyBride. Their set consisted a good mixture of old and new material but none did it matter from the reactions of the crowd. Whenever a breakdown was performed, flashing strobe lights  covered the whole stage, which made the band’s in synced head banging look phenomenal. Vocalist Matthew Hasting invited fans over to the merchandise table to give him “sweaty” hugs and fellowship. 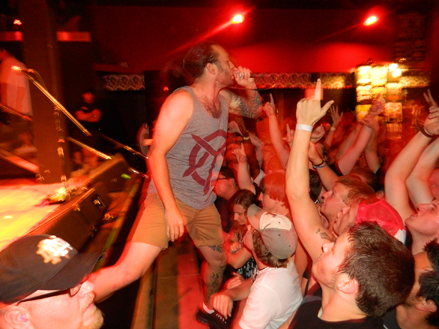 All hands were raised in praise and worship during the set of Sleeping Giant. Before their set started, Vocalist Tommy Green started off with a short prayer and welcomed everyone. There was a good even amount of people up front screaming their hearts out to God as there were people moshing and two-stepping. In the middle of their set, Green recorded via cell phone the crowd singing happy birthday to his wife. The worshiping continued with Green’s testimony about how he found God and how much impact he’s had on people throughout his life whether it was positive or negative. Many people flocked to Sleeping Giant’s merchandise table to meet Green and came to him for prayer. A few people were teary eyed in telling how much they appreciate the band. 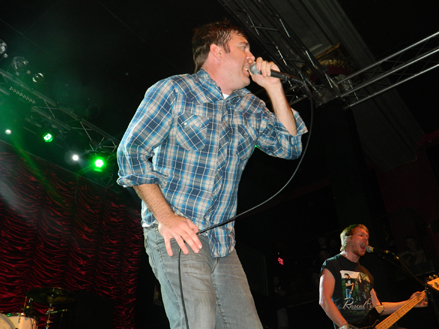 The crowd grew somewhat smaller when Emery approached but they fans who said showed nothing but love. This was the only band that seemed to get the older crowd’s attention. For a band that didn’t specialize in circle pits and breakdowns, the crowd was livid. The band responded right back with holding nothing back on stage. 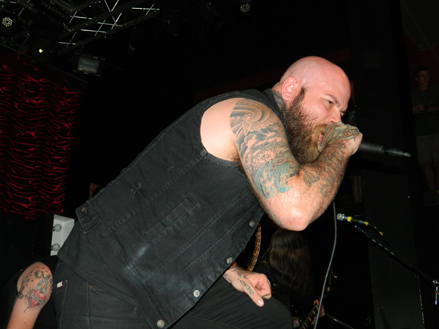 It was finally time for the final act of Demon Hunter. During sound check the crowd was dead silent in awe of their presence. It was due to the drummer, Yogi Watts, comment about how quiet the room was that made the crowd go in a uproar. It wasn’t too later after that vocalist, Ryan Clark, took stage and released his voice of fury. Even though fans kept screaming out random Demon Hunter songs, they stuck straight to their set list. When they performed their last song the lights went dim and all you could hear was the crowd chanting “One more song!”.  Demon Hunter came back and played two more songs. In celebration of it being the last date on the tour, members from the previous bands came on stage with their shirts off jumping up and down during the last song. 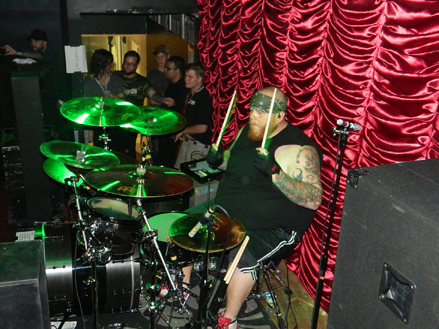 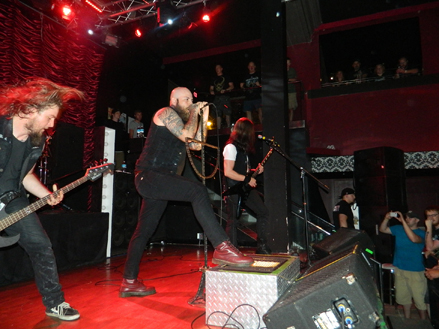 I had an amazing time watching people worship the Lord through heavy music and having no shame in it. The only complaint I had was being stuck behind a red light for 10 minutes waiting for a ship to pass by while the gate was raised.