With Guests Phone Calls From Home and Taylor Thrash

The cover art for Secrets Don’t Make Friends can be seen below. 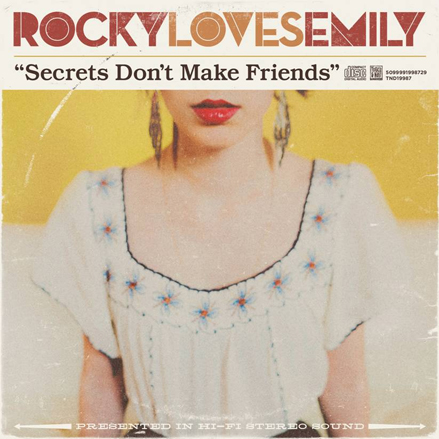 On Wednesday, March 14, Rocky Loves Emily will unveil their new music video for the album’s title track and offer fans a free download of the song at www.SecretsDontMakeFriends.net.

The band will embark on a headline tour dubbed The Secrets Don’t Make Friends Tour with guests Phone Calls From Home and Taylor Thrash. The jaunt kicks off April 7 in Dallas, TX and runs through April 24, winding down in Sauget, IL.

Rocky Loves Emily is also set to play a series of shows at SXSW this week, in addition to making an appearance at the annual Never Say Never Fest on Tuesday March 13 in Mission, TX. See dates below.

April 22- Indianapolis, IN- The Irving Theater

April 23- Evansville, IN- The District Skatepark

As reflected in the disc’s title, the band was focused on channeling a true representation of themselves both as people and musicians on the album. In many ways, the album showcases how the rock group, who hail from a suburb of Detroit, MI, has grown up since forming early 2009. From their first EP, released at the stroke of midnight that New Years Eve, to their first disc on Tooth & Nail, the 2010 EP American Dream, Rocky Loves Emily has been on a journey to discover how best to express themselves.

“The band grew into who we are as people between the EP and this album,” Andrew explains. “We figured out who we are and put it into music.”

That process was greatly aided by producer Matt Grabe (The Maine, The Summer Set). After touring to support American Dream, Rocky Loves Emily headed down to Phoenix in July of 2011, armed with an album’s worth of demos they’d recorded in their practice space back in Michigan. Originally, the plan was to flesh out the demos using electronic elements, but Matt quickly rerouted the process to embrace the band’s live rock aesthetic.

“We had written all the songs on our own back in Michigan and recorded demos of them,” Brandon says. “Just rough live recording demos, just one mike in the room. When we sent Matt the demos he was really excited about the fact that we didn’t just track everything perfectly. So when we went to record with him he tried to push us to not be a cookie cutter, overly engineered band. He wanted us to have an organic, rock ‘n ‘roll feel. He pushed us to accept our human flaws, which allowed the recordings to be alive.”

The band spent three and a half weeks in the studio with Matt, pushing themselves to be the best musicians they could be. Matt encouraged the band members to record every sound on the album themselves—no computerized drums or electronic sounds. The result is a compelling, dynamic collection of songs that focus on genuinely honest expression rather than perfection. Much of that sincerity comes from Brandon’s lyrics, which were strongly inspired by a bad relationship and its heartbreaking end.

“I took my mask off,” Brandon says. “On the EP I said what I thought people wanted to hear, but on this one I didn’t think about that. Every song was my heart on paper. I felt—and I still feel—nervous because I’m very exposed on the record. I’ve never put out a project where it’s my heart.”

There’s something of bipolarity on Secrets Don’t Make Friends because of this thematic content. The pop-rock instrumentals create upbeat, outgoing melodies while Brandon’s lyrics search for deeper, more introspective meaning. “I Don’t Like You” is a catchy rocker with propulsive guitar riffs and driving beats, embodying a sense of catharsis as Brandon reveals how he feels about his ex. “Oil & Water,” a slower, more anthemic rock number, explores the other end of the spectrum, showcasing the band’s musical range. Ultimately, though, the disc is whatever the listener needs it to be in the moment.

“If you’re happy and you put on the record you’ll have a good time,” Andrew says. “But if you’re feeling down you can dig into the lyrics and find something to relate to.”

So while the album is about honesty, in both vague and straightforward ways, it also represents it. Rocky Loves Emily toured extensively for over a year on their American Dream EP and during that time the members discovered their identities, individually and collectively. The album reveals the same band as the EP, but with more confidence and self-awareness, which is something they feel these new songs convey.

“We just wanted more real songs,” Brandon concludes. “Stuff from the heart about the things we were going through as people. Matt definitely saw that and helped us complete that vision. It’s an album we can all be proud of.”