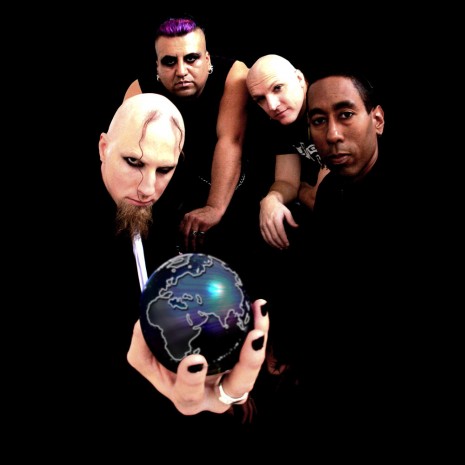 Name 3 bands that, had they not released a certain album at a certain time… you would not exist as a band.
Ben Stewart: U2’s Joshua Tree, System of a Down’s Toxicity. Soundgarden’s BadMotorFinger, The Crucified’s Pillars of Humanity, KORN’s Follow the Leader, James Brown’s The Best Of, Rage Against the Machine’s Evil Empire, TOOL’s Undertow, Nine Inch Nails’ Year Zero, The Choir’s Circle Slide, Red Hot Chili Pepper’s BSSM… wait a second. Did you say three? We have four members, all coming from very distinct backgrounds. I’m afraid three albums won’t cut it.

If there wasn’t music, what skills would your members use and what would they do?
Well actually, we all have day jobs. So we really do work as teachers, in warehouses, as county employees, and I (Ben Stewart) am a full time Rock-n-Roller. I guess that means I’ll be the one looking for a job if this music thing doesn’t fly. Oh no… Please somebody sign this band!!!

When asked to describe your band by comparing yourself to others (the dreaded “Recommended if you like” question), who would you list?
I think we would say that people who like System of a Down, Nine Inch Nail, U2, KORN, AFI, and Rage Against The Machine would be interested in CONSPIRACY OF THOUGHT. I know it’s eclectic, but so are we.

What’s a secret or little-known fact about your band (or one of your band members) that would make you the darlings of the music world if we all knew it?
Well, I’m not going to lie. I make a powerfully mean vegetable lasagna. One bite of that and it’s like “Here comes the stardom.” And don’t get me started on homemade ice-cream, fresh salsa, or humus.

If there was another band and another album that you could give everyone as a present for Christmas, what album would that be?  Why?
It would be U2’s album How to Dismantle an Atomic Bomb. This is a true feet of excellence. They manage to fit world focus, worship, stick-it-to-the-man-ness, and Christ centered vision into one album. Love and Peace or Else, Miracle Drug, Crumbs From Your Table, Yahweh, etc…

What is one belief, conviction, idea, or passion that you honestly think might’ve been deposited inside you or given to you by God?
Well, I’m pretty sure that they’re all from GOD, but empathy has been growing in my heart. The ability to understand and care for the lives, scruples, and struggles of others. Matthew 25:34-40 has been a real butt-kicker for me, and I want to see that come out in the music I create.

What’s one of the most memorable things (either good, bad, or funny) that’s happened at one of your shows?
Leading 20,000 people, in the middle of Hollywood Blvd during an anti-war rally, in singing the words from our song Jihad, “Why can’t we walk hand in hand. Put an end to all the hate that now destroys our broken land.” We were clapping, singing, and embracing one another. I realized that Christian event or not, we were worshipping God. The fields are in the streets, and ripe for the harvest.

#8: If you had a chance to perform for most of the televised world and play just one song, which song would you play … And why?
If it were a CONSPIRACY OF THOUGHT song, we would perform Nothing More Than Light. It connects with people in so many ways. For the urban-isolationist it can be a connection to others that are surrounded by people and yet feeling so alone. For the seekers it can be a guide to where truth can be sought. For the spiritual it can be a story of transcendence from the material world. But for the Jesus follower it is all of our stories rolled into one. The human animal is a thirsty creature longing to fill its empty soul with sacrificial, unconditional, and radiant love.

If a super surgeon removed all of your emotions and the ability to feel any emotion for the rest of your life, which one or ones would you most want to have back? Why?
I would say Love, because it embodies so many things, but I don’t truly believe that Love is an emotion. It’s an action as described in 1 Cor 13, or 1 John, or by the actions of Jesus on the cross. Love isn’t what we feel towards someone, but how those feelings push us to action on others behalf. That being the case I would say that joy is the most important emotion to get back.

If you could ask God one question, what would you ask Him?
Why he let’s us kill, abuse, and hurt one another? I have hundreds of questions; Why He allowed sin in the first place, Why a loving God would create disease, and the like. But I think that killing is at the front of my current list. I pray, as I work out my own salvation with fear and trembling, that the Lord will give illumination. But until then we emulate Christ and struggle on.

What’s the best video on youtube (like, if our readers had to type in a word or a few to search it), what would the keywords be?
OK so, I love youtube!!! Of course the shameless plug is to say that you should check out CONSPIRACY OF THOUGHT’s video for Nothing More Than Light. But my personal favorites are always shifting. My current favs are- U2’s video for Magnificent, Mastodon’s video for Oblivion, Rammstein’s video for Amerika (a great example of what happens to the world when we plant the seeds of Capitalism over Christ), and you need to check out Jes Hudak’s video for Life Come True (the one where she just plays piano in her room and sings, it’s amazing).

If someone came to you and said, “Hey! I need to make some changes in my life…Help me out! I’m going to take one piece of advice from you and apply it to my life and/or make it a habit for 30 days. What would that piece of advice be?”
Wow! If Jesus couldn’t tell people how to live with one single piece of advice I’m sure I couldn’t. He took a couple years, and I only get 30 days? I guess my advice would be for that person to meet with me three days a week for those 30 days. Then we could talk about what was going on in their life, pray about it, and seek biblical solutions. I would also make sure that we did those meetings in the context of community. This way we could be mutually encouraged, seeing God’s hand at work together.

In 4 sentences or less, explain how your band came to exist. (and give us a date).
Mike Parshall and I went to college together (California Baptist University in Riverside). We met, formed COT, and started playing out. In 2004 we basically merged with another band (Colorblind Society) and that’s when we added Tony Vasquez and Devanand Bassanoo. We have been a very happy family ever since.

What is the release date of your next (or latest) album? Or what is the next big date on your band’s calendar?
Our Latest full length CD is titled “Nothing More Than Light,” and is available at www.youngside.com, and more info can be found at www.myspace.com/conspiracyofthought.

What’s one question you’d always wanted to be asked in an interview? (and please provide your answer)
I don’t actually have one. But I know that I always want opportunities to interject ideals and substance into an interview. Even when they don’t ask those kinds of questions we find ways to sneak it in. Example: Interviewer, “So, are you hounded by groupies at your shows.” Answer, “Well no, not really. But there are currently groups of people in the Democratic Republic of Congo, in Africa, that are training child soldiers to kill, destroy, and rape…” See what I mean?