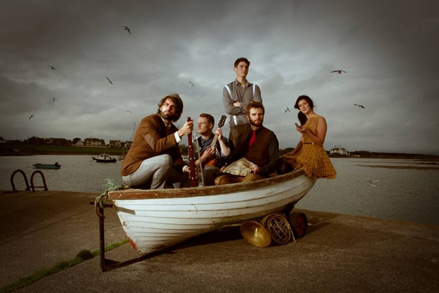 It’s a truth universally acknowledged that anything homemade is typically better than its slick, factoryproduced counterpart.

Much like a handwritten note, a birthday gift that wasn’t procured at the local mall or a mouthwatering, made-from-scratch meal savored with family and friends, Irish worship artists Rend Collective Experiment wanted to approach the follow-up to their universally praised debut, Organic Family Hymnal, in the same decidedly homespun fashion.

So instead of holing up in a studio for weeks on end, Rend Collective Experiment held their recording sessions a lot closer to home—namely in Gareth and Ally Gilkeson’s own living room in Northern Ireland.

For some musicians, working at home would be the very definition of chaos. But for the group who’s always been less of a band and more of a family anyway, it was an ideal experience that culminated in the group’s exquisitely crafted (and appropriately titled) second album, Homemade Worship By Handmade People.

“The best way I could describe it was that we didn’t want to get involved in any clinical, polished studio where things felt detached from normal life,” Gareth says. “We wanted things to feel homey, and there was something intimate about that. Naturally, there were guitars and instruments everywhere for the better part of six months, and I’m not sure how my wife [Ally] coped, but it was an experience none of us will ever forget. It’s a fun way of making music.”

More interested in creating a raw, authentic vibe than necessarily getting all the technicalities right since they also produced the album, the aim of Homemade Worship By Handmade People was to write songs with congregations in mind, and to remind the Church universal that we’re all unique, valuable and made with God’s own hands. 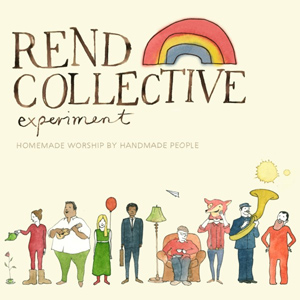 “We’re all handmade people created by our God who is not safe or small,” Gareth shares. “Our heart was ultimately to make music that was sonically creative and pushed the boundaries, but we also wanted to write something that really served the Church. It’s not us trying to do something crazy and different for crazy and different’s sake, it’s our response to a truly magnificent God with a wild imagination.”

Effectively setting the stage, both musically and thematically, the album’s opening track “Praise Like Fireworks” is a lyrically inventive and inherently enthusiastic reminder to let worship spring from a heart of thankfulness. Emphasizing that we all have a home in God’s family, it’s a “celebration of community” that the group says is “insanely fun” to play.

With hopes of engaging the Church in theological matters, better ways of looking at who God is and approaching our culture, Homemade Worship By Handmade People is also filled with challenging songs like “Build Your Kingdom Here,” a stirring call for revival, not to mention a faith-affirming declaration that we, the Church, “are the hope on earth.”

“The Kingdom of God, in my opinion, is the rule and reign of the King in the hearts and minds of His people,” Gareth says. “And every time we sing, ‘We are the church/We are the hope on earth,’ together, people seem to get it instantly and sing with every fiber of their being. The song is stylistically fun and light-hearted but the weight and intensity of these words is what really seems to resonate. Of course, that doesn’t mean we’re the only hope, but rather Christ in us.”

Later on, the “experiment” part of Rend Collective’s name kicks into particularly full force with a vibrant interpretation of the classic hymn “Be Thou My Vision” and “Second Chance,” which the band recently made a video for. Written with a hymn-like structure, the latter is a song about failure and man’s perpetual struggle with guilt.

“We never are beyond the reach of God’s grace, there’s always a second chance,” Gareth shares. “We all find it difficult to accept God’s forgiveness, so we wanted to write a song about how the Cross changed everything—for good.”

The former, naturally, had its hymn-like structure already in place. But when “Be Thou My Vision” was written by St. Patrick more than 1,500 years ago and later, interpreted in English 1,400 years after the fact, some of the song’s original meaning was understandably lost in translation. As the group adapted the song from the original Irish and Old English, they began to realize the words were starting to get lost in our ever-changing culture.

“The issue with ‘Be Thou My Vision’ as we know it is that it’s so needy. It wasn’t meant to be a song of longing and asking God to ‘Be our vision,’ but it is a song of declaration and faith,” Gareth explains. “We say to God with strength, trust and humanity that ‘You are my vision, You are my wisdom… You are my battle shield.’ A confidence that we are His true sons and daughters and that He is dwelling inside us.” Discovering this led the band to write a new translation of this ancient hymn that allows the listener to be free in declaring who God is, bringing new life to this old Irish folk song. A prevailing theme on Homemade Worship By Handmade People is how we’re ultimately all in the journey of faith together. For the record, there’s no Bono, Edge, Adam Clayton or Larry Mullen in this Irish-bred group. If anything, they’re intentional about wanting the audience to know they’re part of the Collective, too. In fact, the album’s liner notes encourage listeners to join in by snapping and uploading their picture to the Rend Collective Experiment’s website.

“Whenever we’re onstage, we always say right from the beginning that this isn’t a stage and audience, it’s a whole congregation of people,” Gareth says. “This whole theme of oneness is something we’re passionate about. We want to involve everyone in what we’re doing because we’re all just people handmade by God and
figuring out what it means to serve Him, worship and walk in community together.”