Overcome crosses over from death into life 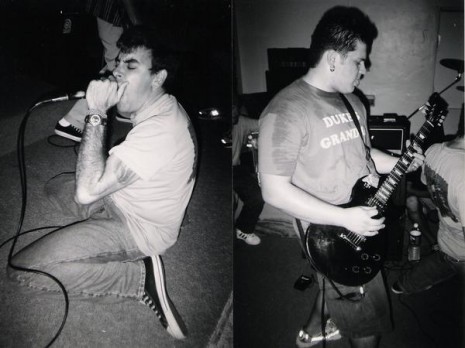 A week ago today I was hand picked to read the first press release on hardtimes.ca, about the resurrection of one of 90’s greatest Spirit-filled hardcore bands of the West. The band is Arizona’s Overcome. Yes, after ten years Overcome has crossed over from death into life. Baby maker Jason Stinson got a few old friends that played in Overcome and Indwelling to start a new project. But after a few weeks of practicing, it just felt right to bring Overcome back. Stinson told Hardtimes.ca why:

“This is not a reunion band. This is more of an evolution of Overcome. What we would probably sound like had we stayed together over the past 10 years. We will only be playing a few old songs live. Our focus is to move forward with Overcome and write all new material. We currently have two new songs written. We will be recording a demo in April with Ryan Butler (Northside Kings, Landmine Marathon) at his studio, Arkane Digital. Those songs will be posted online in May. We have been rehearsing weekly and plan to have enough new material to record a full-length and start playing live later this year.”

Along with a new lineup Stinson has decided to play guitar again, just like he did in Indwelling. Although Thomas Washington ex-vocalist for Indwelling will help do some studio vocals. Overcome has a new and noteworthy frontman. Texas’s own Jarrod Norris. For many people you may or may not know Mr J Norris, but he has had his hands in spreading the first wave of Spirit-filled hardcore here in Texas. He started a little label and distro called Deadself. Distro-ing bands like Overcome, NIV, xDISCIPLEx A.D., Travail, Fed By Ravens, Eso-Charis, and many more. He put out a compilation called Blessed Be This Killing. Besides the bands he distro-ed or put out himself, the comp contained unreleased songs by Shockwave, Spitfire, Season In The Field (most or all members went on to play in Zao) and Pensive (most or all members wen on to play in the Juliana Theory). Jarrod booked many Spirit-filled bands, like Stretch Arm Strong, Overcome, Eso-Charis, NIV, Through and Through, xDISCIPLEx A.D, and many more. If you’ve ever seen the SAS video for “Second Chances” they talk about driving from a Dallas show. That show was put on by Jarrod.  After moving to Arizona ten years ago Jarrod got married and started a family. In November of 2003 Jarrod took the stage as the frontman of Indwelling. Facedown Records first and best death metal band.

I give a lot of respect and honor to Mr J Norris. If it was not for him, I would have not know what Spirit-filled hardcore was and I would not have started writing for HM again after seeing his work in hardtimes .ca. Words can not describe for me how excited I am for the awakening of Overcome. That show at the Showcase in 2003 was the first time I felt God fall upon me at a hardcore show. Seeing Indwelling and Symphony In Peril’s first time playing California. That show will forever be a life-changing moment for me. I know that the first Overcome show back will be the same.