Nashville Calls Upon the Sons of God 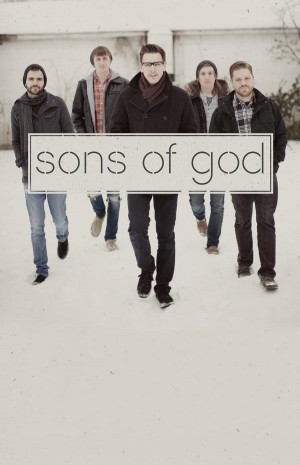 It’s easy to say there are no true musicians left in today’s cookie‐cutter industry. Not

many will wrong you for blaming the bigwig suits for your lackluster iTunes playlist.

bares their artistic ambition with every recorded sound. These are the acts whose

A band like Sons of God, who boast a bold name and original sound, would slip right

under most listeners’ radar outside of Christian music. Fronted by multi‐talented

Aaron Newberry, Sons of God is on the brink of recording their first full‐length

album with Producer Jared Fox at Fox Den Studios in Nashville, TN and beginning an

extensive 2011 tour schedule. Things weren’t always on the up for Aaron though.

In fact, Sons of God nearly didn’t make it to this point.

Penniless, bitter, and scattered, Aaron was going to give up on the path he had

started three and a half years ago. He remembers, “I was tired of being a broke

musician with lots of opportunities and feeling like I had nothing to show for it.”

Aaron was recording all the instruments and funding Sons of God by himself. Although he now has a full band to record the upcoming record, over‐drafting his checking account is still a concern.

“I’m making little to nothing making music, and it’s hard not to want money.” Aaron

continues, “I don’t want to be rich, but sometimes it gets so tough. I have friends

(like former counterparts in Chasing Victory, and Brighten) that are extremely

successful and here I am still struggling to make ends meet.”

Thankfully, Aaron recognizes this struggle as inspiration for Sons of God’s mission

to make music that evokes emotion not only found in Aaron’s voice, but also in

the intricate instrumentation reminiscent of Explosions in the Sky, or The Receiving

This epic quality separates Sons of God from other Christian acts, and it stems from

having devoted band members that wholeheartedly believe in the band’s message.

You can disagree with their beliefs and their mission can turn you off, but you can’t take anything away from their integrity as a band that lives their art day in and day out. As Aaron states, “I’m pouring myself out in these songs.” That is one of the most

refreshing things to hear in an industry full of fakes and put‐ons, and fixating on the

Christian rock scene, Sons of God bring honesty to a message that has been

tarnished and mocked by greedy opportunists.

On whether modern Christian rock music is moving in a positive direction, Aaron

explains, “I’ve met a lot of Christian artists who I would say are legitimate, that are

living that lifestyle… guys like Switchfoot and Leeland. But I have met more artists

who are more about the money and the fame.” He recalls, “It was kind of a

were legitimate, then realizing that legit Christian artists are few and far between.”

Aaron believes that if more Christian artists, and really all artists in every

venue/genre, were more transparent and willing to exploit themselves, that their sincerity could make a real difference in someone’s life.

That is Sons of God’s vision. They want to connect with their fans in ways most

bands neglect. Their only official release, The Genesis Prologue EP, is offered for

free on the Internet and the same will go for their future full‐length. Aaron justifies

this strategy by asserting, “We want to let people in. I think as we continue to tour

into 2011 and release our full‐length that our fan base will grow itself. When you

offer your music for free, with no strings attached, it is easy to get people to listen to

it, and when it turns out to actually be good, more people will want it and more will

faiths and backgrounds is questionable. Everyone has been at a rock show that is

interrupted by a sermon of sorts. It can be confusing and awkward. For Sons of

God, the vision is different. Aaron declares, “If we take time to connect with people,

then that will be what really makes a difference.” He adds with heartfelt intent,

“We’re not the kind of guys to shove something down your throat, because people

need Jesus more than Jesus needs them. I’m not trying to market or sell Jesus to

anyone; I’m just trying to be Jesus to as many people as we can. A whole lot of that

involves respect and love. And I would never respond positively or optimistically to

just want to offer people a hope outside of what they think they’ve found already, or

not. If they are happy where they are, then that’s for them to decide.”

Check out Sons of God on MySpace: www.myspace.com/wearesonsofgod