August 23, 2010 – (Eureka, Ill.) – Before heading out on their final tour, Mae stopped by tiny Eureka College in rural Illinois for a tune-up show and a sneak peek at what’s to come before they call it quits. 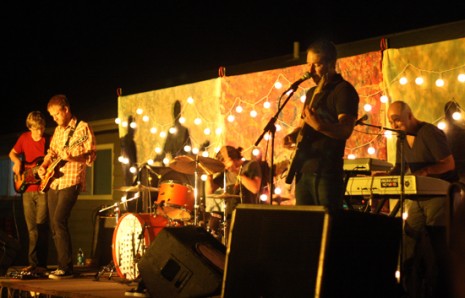 The cramped stage was set up on campus behind a fraternity house on a lawn facing dorm buildings, so it seemed like every student there two days before classes started stopped by to check out the show. Many in the crowd were obvious Mae fans lined up along an impromptu orange plastic fence barrier in front of the stage, and many were newcomers sipping lemon shakeups on the lawn. Mae introduced themselves and since they were the only band playing, they started slow with “Tisbury Lane.” In between songs, frontman Dave Elkins often gave a bashful “well, what do you guys want to hear next?” The faithful in the front gave their opinions and Elkins once admitted that they didn’t know a song since it was their first time playing in the U.S. with the original five in three years. After a short full-band conference, though, he announced they decided the first show to sell out on their Goodbye, Goodnight tour, they would play their sophomore album The Everglow front to back.

The set was heavy with The Everglow and Destination­: Beautiful, and that seemed all right with everyone involved. They played nothing from their latest three EPs, though whether that was because the two returning members weren’t around when they were written or simply because they hadn’t rehearsed those songs yet, future dates may or may not follow that pattern. Early on, favorites “Suspension” and “Embers and Envelopes” got the energy up, prompting Elkins to promise the first person to crowd surf from one end of the barrier fence to the other free merch. It happened, but only when a group half-carried their friend through the sparse line of people at the front. It was worth the laughs even if it didn’t really count. The band didn’t sound rusty considering bassist Mark Padgett and keyboardist Rob Sweitzer had only recently rejoined the other three longtime members. Elkins sung some phrases down an octave as he usually does and there were few background vocals, though neither detracted much from the experience. He and guitarist Zach Gehring threw in a couple guitar duels and the solos got catcalls. When they began rocker “Brink of Disaster,” there wasn’t a distinction between old fan and new – everybody was into it. They tried to finish with “Someone Else’s Arms” but the diehards wouldn’t let them pack up and leave, so they had to huddle up again to figure out another song they all still could play. They settled on “This Is The Countdown,” which both they and the crowd seemed happy to end on. 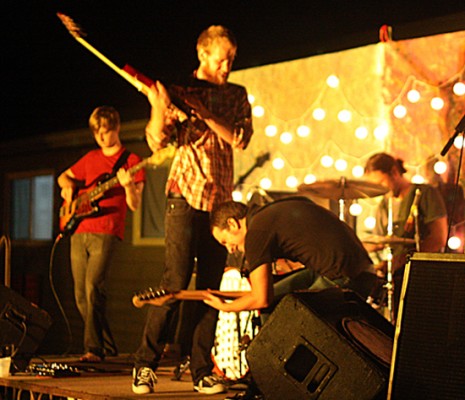 It was an odd show with no opening bands (or roof). You got the impression this was a new band playing its first show for friends next to the dorms. Of course that alternate reality evaporated with their full stable of songs and when Elkins said they’d never heard of Eureka Collage and that his grandma told him Eureka alumnus Ronald Reagan was a fine actor. He said it was a fun show for them and you could tell, even if the farewell tour will be a mostly different experience for both Mae and the crowds.