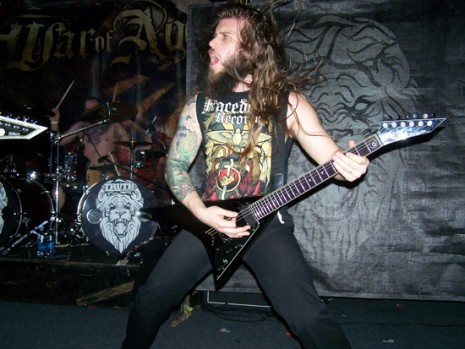 February 7th and the 8th were two dates very special to me. As a die-hard Chicago Bears fan, I had witnessed the defeat of the Indianapolis Colts at the Super Bowl and for the metal music lover inside me, the following day I was going to see The Abominable Snow Tour. Yes, before my eyes I was going to see Living Sacrifice, War of Ages, Shai Hulud, Lionheart and The Great Commission. Not only would I see Living Sacrifice, but most likely in my position as an intern for HM Magazine, I was going to be able to meet one of the Christian metal legends.

The show was taken place at a small venue called the White Rabbit. It’s a place in San Antonio, TX, with sweet looking graffiti art covering the outside and it had its own pizza parlor next door. Although the pizza is nothing to brag about, it had a pretty good setting with autographed photos of bands that had played in the past at the venue.

Thin Ice, a band that is from Texas and has been recently signed to Blood & Ink Records, was the opening act. Since they played early, not many people were around to witness them. The band members are still young and gave a good amount of energy on stage even though the crowd was dead. I have a feeling that once this band gets noticed, they will be admired by the hardcore scene. Their songs are heavy and contain two stepping parts that are hard not to move to. 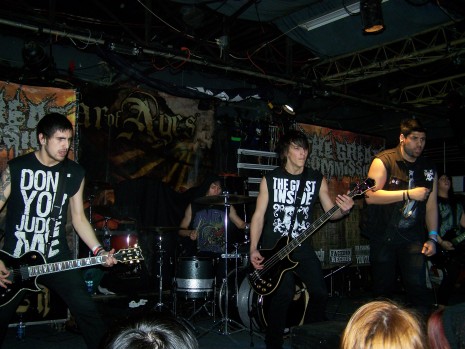 Up next was The Great Commission. This was my first time witnessing them and from knowing what they sound like, I was excited for what was about to come. While the band crew was setting up, they brought out banners that showed the album cover of  And Every Knee Shall Bow. As I was expecting, their stage presence was amazing with choreographed head banging and squatting during their explosive breakdowns. However, the crowd was still very small and only a couple of people were moshing. In the middle of their set, frontman Justin Singh took a time out to explain what the band was all about and he didn’t hold back on his words. One of the main points Justin made clear was that their set was a church service. He mentioned how everyone had a testimony and how important that is.

“Some of you might have been hurt from the Church, with how you look. Whether it is with your piercings and tattoos, I want you to know that that shows the hypocrisy of Christians. The Lord calls us unto him and not to judge others.”

It was at that point I saw how serious of a ministry The Great Commission is. With Justin’s words having such strong authority and exposing the truth, I can say it truly touched me. When they finished their set, Justin announced about the band Lionheart coming up next. He asked the crowd would stick around for them and show respect. Apparently on the last few dates of the tour, people have walked out on Lionheart because of them not being a Christian band. Justin then emphasized on the fact that just because someone isn’t Christian doesn’t mean they don’t have something important to say.

To my surprise Lionheart had the biggest crowd throughout the show. They played an exciting set with their sound of “tough guy” hardcore. I think a crew of theirs showed up and got the crowd into their music. Like many hardcore bands, they were jumping around stage and the vocalist kept telling the crowd to stop standing still.

Next up was Shai Hulud and if I ever had felt bad for a band, it would be this one. For those of you who don’t know Shai Hulud, they are legends in the hardcore scene. They have been around since 1995. About 10 people stood up front and few were singing along to their songs. Nevertheless, Shai Hulud gave it their all as if they were playing in front of a massive crowd. 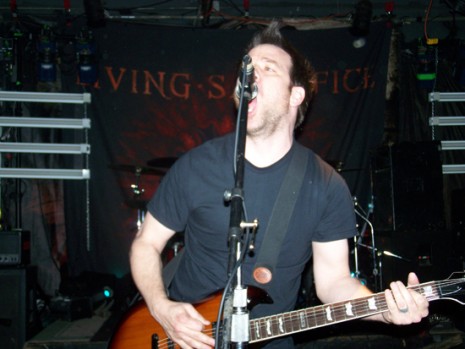 My heart was pounding knowing that up next was Living Sacrifice. For reasons I don’t know, they were not the headline of this show. The crowd grew a little bigger for Living Sacrifice. One of the odd things about the crowd was that it didn’t look like a typical metal crowd. There was this fat man wearing an ugly Hawaiian shirt smoking a cigar and kids wearing baggy pants, t-shirts sold at JC Penny and gym shoes. While the band was setting up, people were cheering and yelling comments such as “I love you Bruce!”

The second Bruce Fitzhugh’s guitar pick flowed through the upper strings of his ESP guitar, the place erupted with screaming. Their choice of songs ranged from their album Reborn to their newest The Infinite Order. Behind the band were a set flashing white lights that sometimes followed the double bass rhythms being done by drummer Lance Garvin. Although I was bummed out that guitarist Rocky Gray wasn’t there, their set still blew me away. Living Sacrifice ended with their classic track “Liar.” The crowd cheered for an encore but the show had to go on because of time. 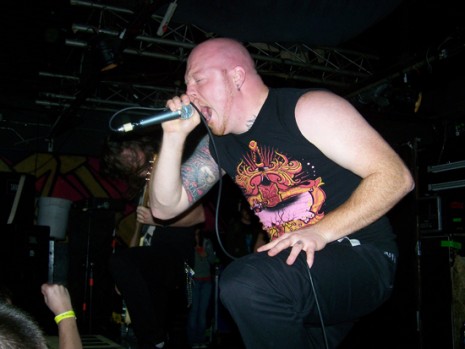 Last but not least was War of Ages to close out the night. Although this band sounds heavy and tough, they are all really cool guys and enjoy being around their fans. Still with the crowd not being a big number, War of Ages seemed to enjoy playing and witnessing to them. Most of the crowd now was young people mostly wearing War of Ages shirts they just bought from their merchandise table. Guitarist Branon Bernatowicz showed great stage presence with his long beard and hair swinging during his spinning head banging. Frontman Leory Hamp had a joyful smile the entire time while letting fans scream lyrics into the microphone.

All in all the show was a success. Although there were few in the crowd, I saw no one with a disappointed look upon their face. Perhaps it was the fact that they were exposed to load of heavy music, or the simple fact that most of the bands showed the love of Christ through their presence.