Bushnell, IL – Some people have rightly complained about outdoor festivals being like a survival test of the elements. Past fest-goers have battled heat and dust or mud. This year’s Cornerstone Festival, though, felt like an indoor event with the air conditioning on the whole time. It was lovely … that is, until the rain of the final day, but five out of six ain’t bad.

Monday afternoon had several generator stages going at full blast, beginning an outdoor entertainment district that’s a wonderful, but sometimes lacking quality free-for-all for DIY bands wanting to be heard. Tuesday saw several bands showcasing as part of the “Reignite” all-day showcase of indie bands. Los Lonely Boys played a laid-back and seasoned set of blues-soaked tunes that showed off their universal appeal. By the time the festival officially started, over a hundred performances had already taken place.

It was cool to hear Owl City’s strong pop hooks and see how two guys with Apple notebooks and keyboards can fill a tent so wonderfully. Relient K finished off the Mainstage on Wednesday, wrapping up with the epic “Deathbed.” The Showdown, Spoken, Showbread and The Blue Letter all rocked the HM Magazine Stage with love and volume.

A couple of the strongest highlights of the fest had two things in common – vocalist Mark Salomon and guitarist and then bassist Jeff Bellew. Stavesacre played a joyous set on Thursday that covered all the band’s hits (like “Minuteman,” “Sand Dollar” and “Gold and Silver,” and closing with “At the Moment”), as well as a couple new ones from their Against The Silence EP. After reading Mark’s book, Simplicity, and getting insight into all his tormented lyrics, his song introductions this night and his uncharacteristically smiling face and steam rising from his bald head played out like a high definition drama of a great band seemingly playing just for the fun of it. 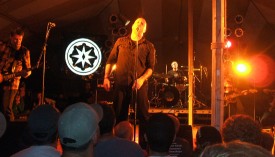 Seeing so many shows of theirs in the past and noting how good they were when Mark was mad about something, it would make sense to worry that this would produce a downturn of performance quality. No worries here. They sounded amazing, tight, and driven. The Crucified played an evening encore on the following night, and it was a fantastic display of raw power and energy. Not only was this a band reuniting after over a decade, but they were performing so tight and fast that it was a sight to behold. Drummer Jim Chaffin, of course, provided a super solid low end, but Greg Minier’s guitar playing was both clean, dirty and his wah-wah effects showed great feeling. Of course, songs like “The Crucial Moment,” “Your Image,” “Mindbender” and “The Power of God” were mesmerizing and a rallying point for gang vocals and really good memories. It’s hard to think of such an intense performance as “nostalgic,” and that’s probably due to this music being more like a super-caffeinated energy drink than some dull but fine wine. 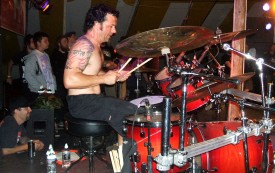 A jillion other heartfelt performances took place, but a small smattering of hightlights would also include: the fun and goofy times on stage with Austrian Death Machine; the raw, thunderous metal power of Oh, Sleeper and Becoming The Archetype; the “Battle of the Alamo” (complete with forts) in the crowd at the Flatfoot 56 show, which reportedly took out a tent pole; Living Sacrifice (who, along with War of Ages, The Devil Wears Prada and Underoath all played under tents rather than the rained-out mud bowl of Mainstage on Saturday); the frenzied preaching at For Today and Sleeping Giant; and a piano rock band called Eastern Block. It was exciting to see Brian “Head” Welch play on the main stage, who held his own with his riff-heavy “scary-core.” Shiny Toy Guns was another anticipated act, which shone brightly in tunes like the self-censored “Le Disko,” “You Are the One” and “Don’t Cry Out,” but didn’t seem too comfortable on the big stage. Next year, when you deliberate making the trip: just go. 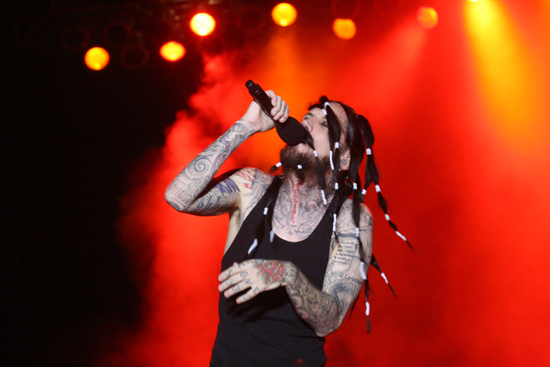