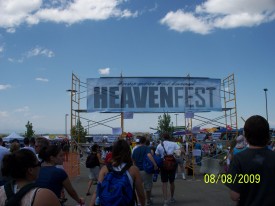 On August 8th, for the second year in a row, a multitude of people made their way to Northern Hills Church in Brighton, Colorado. Anyone who is familiar with Colorado knows that practically nothing happens in Brighton, except in the unfortunate event that one receives a jury summons. But on this day, its dirt roads would be lined up with thousands of cars all for one huge event- Heaven Fest. Over 25,000 people roamed the around the 70+ acres and 8 stages each featuring a different of genre of music. But the vast majority of the attendees gathered at the main stage where big name acts like Seventh Day Slumber, Kutless, Skillet (a veteran from the first Heaven Fest) and Third Day performed. But the real action all went down behind the main stage at the rock stage. 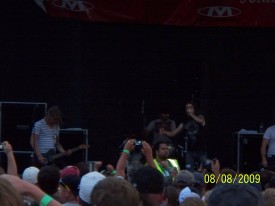 Unfortunately, due to the high volume of traffic trying to get onto the grounds, we completely missed Sheridan’s opening act and only saw Shel long enough to for them to inform us that Everfound would be up next.  Colorado’s own (via Russia) Everfound began their 30 minute set with “Lie Detector” followed by their award winning song “She Said”. One thing that definitely stood out for me, not just for Everfound, but all the artists that performed that day was the amazing sound quality. Out of all the concerts I’ve been to, none of them have sounded so clear and close to the album recordings. Seriously, it was that good.  Also included in their set, were “Forget Me Knots”, “Bring Me Back” and “Crashing” from their album Colorful Alibis and Scandalous Smiles and “Moments like These” from their self-titled EP. 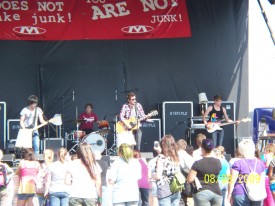 Following Everfound was the Glorious Unseen and their music had more a praise and worship tone to it with songs like “All Around”, “Meet Us Here”, “Forever Holy”, “How He Loves”, “”Hear Our Prayer”, “The Hope That Lies in You”, “Heavy Hearted” and finishing up with “Be Thou My Vision”. Many people raised their hands in worship during this set, and was definitely the most spiritual.

All the way from Idaho came Esterlyn who opened their performance by thanking the crowd for coming to see them while Kutless was still playing on the main stage.  They covered 8 songs from Lamps and Mending the Meaning, starting out with the high energy song “Faster, Faster”. “Emptiness”, “We All Need”, “Back to the Start”, “Like the Rain”, “From the Inside Out”, “Ester” and “You Are the Way” filled their 45 minutes on stage. Esterlyn’s vocalist Luke Caldwell later told me in an email (‘cuz there’s no way I could’ve remembered these song line-ups on my own) that “This was our first time at Heaven Fest and it was definitely one of our favorite festivals this summer.”

Next up, traveling all the way from Westminster, (a massive 20 minute at the most drive to Brighton) was Colorado’s own Ambient You. Like the Glorious Unseen, their music also slanted toward a praise and worship type of sound with songs like “Before the Dawn”, “Genesis”, “I Am to Love You”, “Blessed Be Your Name”, “Hear My Love” and “Captivating”. Unfortunately for them, they were playing up against Skillet on the main stage, so the crowd wasn’t too large. Although they tried to get the audience involved by asking them to help sing the “ohs”, as I hear they are a good source of joy and vitamin C and also making quips about facing the beautiful mountainous scenery while we, on the other hand, we sadly, only got to see them.

From the land of elderly people, (not Florida, the other land of the elderly,) Phoenix, Arizona came Stellar Kart with what I consider the most entertaining show outside of the music. From the beginning, they mixed songs like “Activate”, “Innocent”, “Me and Jesus” and “The Right One” with jokes about being lame for wearing their own band shirts. Then “things went crazy” as they started taking requests from the crowd, from trying to play the theme song from Jurassic Park, to a failed attempt at the Imperial March from Star Wars (no, I’m not sure that’s the exact name of the song, I’m sure all the Star Wars fans will correct me).  But they really raised eyebrows, my own included, when they played “A Whole New World” from Disney’s Aladdin. Adam later remarked that “it was one of the best shows we’ve played in a long time.” And they wrapped it up with “Livin on a Prayer” and “Life is Good”.

Then as the sun began to sink behind the mountains, and the crowd swelled to at least 3 times the average amount of all the previous bands, the main event of the rock stage appeared- Disciple. And they did not disappoint. Disciple’s energy was high and that sentiment was mirrored by the crowd with people jumping up and down during the entire hour long set. At various points during the show, they were banging their heads so furiously, that my neck almost hurt just watching them. Regrettably, I didn’t hear back from them to report exactly what songs that played, but they’re busy rocking people’s socks off and giving a free 3-2-1 ringtones, which certainly doesn’t hurt any.