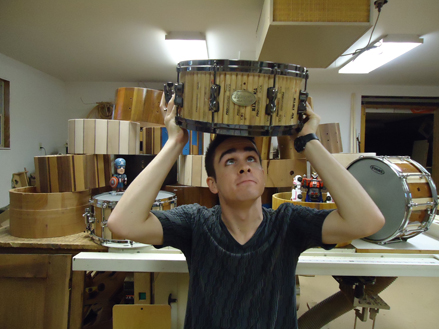 What do you, and who are some people you worked with?
My name is Kaleb Kilmer and I build custom snare drums. I work most closely with Matt Greiner of August Burns Red with our business Greiner&Kilmer Customs. We have done work for Aaron spears, and Brent Caltagirone (This or the Apocalypse), which are both very exciting, and have interest from a few other drummers. I believe we’ll be building one for Alex Shelnutt (A Day To Remember)  in the near future!

How did you get into it?
It all came about due to being raised by my dad who’s worked in a woodshop for as long as I can remember, a passion for drums, and a box full of broken drumsticks. As I tried to figure out what to do with these spent drumsticks I eventually came up with the idea of using the sticks to build a snare drum shell. My dad and I got to work on it, and right as we got the shell done I ran into Matt at church one night. We got some food at the Cat’s Meow in Manheim, and as we talked I showed him pictures of the stick snares shell and he brought up the idea of us building some drums together.
After a night full of discussing drum shells and how they’re built- and me owning him at Wii bowling- we found ourselves at the start of Greiner&Kilmer.

What kind of Impact of hard music drummers have using different style more unique instruments, like a custom drum?
Custom drums are thriving right now because everyone has their own style, hard music drummers all play in the same genre but from each to the next there can be a wide variety of style and taste differences. Everyone has one thing that they want in common though: the highest quality instrument they can play. Custom drums give everyone the chance to play a drum they love the look of, that sounds exactly the way they want it to.
Maybe their favorite drum won’t be another’s cup of tea, but the beauty of it is that there’s no right or wrong way for a drum to sound. If you like it, play it!

What are 5 unsigned bands, that you think people should check out!
Oh boy here we go, let’s see… My friends in Vision, My Valor have always impressed me. Same with my friend Drew who drums for Jesse Baker Music. I’d also recommend looking up Sisterbrother, very good worship music. In Search of Words is another local band I definitely like a lot. I’d also like to see more people listening to The May Season.

What is going on with you cool right now?
My dad and I are putting the finishing touches on a lathe we’ll be able to turn the drums on instead of the routers jig we’ve been using, which will speed up production and make the end product even nicer. Also I’ve been experimenting with doing more intricate inlays, practicing my woodburning, working on making custom badges for customers who might want one. We’ve also got a website in the works which we’re very excited to get up and running!

You did a Matt Greiner custom snare, whats going on with that,where can people get it ?
The signature snare is pretty much through, actually. We’ve only got 2 left that are unsold! They can be ordered by emailing GreinerKilmer@gmail.com or if you want to design a custom one you can email me at himynameiskaleb@yahoo.com

Favorite musician or drummer?
Matt Greiner, may sound cheesy but it’s true. He’s a mind blowing drummer, an excellent musician, and just all-around a really good guy. He’s been my role model since I started high school and now I’m fortunate enough to get to work with him! Oh and as far as other drummers I love I have to mention, Atom Willard and Benny Greb. Those guys are crazy! 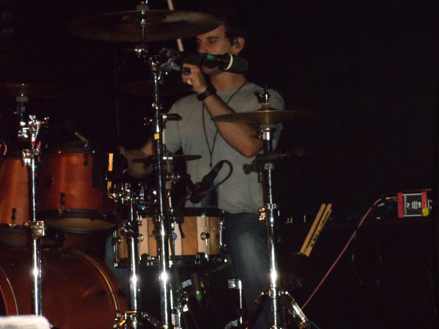 Note from the author: Kaleb is a shining example of how he is doing two things he loves making music and drums together.