First & Goal: A Football Magazine with a Faith Perspective 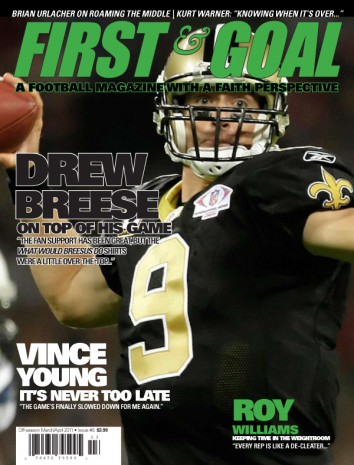 I’ve been sitting on this idea for 15 years, waiting for the right opportunity to launch it. Turns out I’m always busy, with one magazine deadline after another sucking up any “spare” time that could exist. It’s a wonder I was able to “hunker” down and get my novel written. That’s why it took five years to pull off. This idea, this vision, however, is a little broader than a novel (though the novel dream is to become a movie, but not one that I’d make). This new magazine title (which I’ve published a sample 15 years ago to lock in my copyright) would involve an elaborate business plan, hiring an editor, advertising salesperson and a PR director (preferably an ex high school football coach) and (most importantly) two professional football players to invest in and advise the magazine.

Why a football magazine? The NFL just launched a magazine, so the idea is not too outlandish. There was a title called NFL Insider in the early part of this past decade that came and went. Magazines are going out of print left and right. My own magazine title, HM Magazine, for instance, just went out-of-print after 26+ years this past fall. I think this title could work, however, because it has the potential audience to reach the 50,000 circulation mark, which is where I’d like to level off at. I’ve seen magazines break themselves to go beyond that, to go beyond 100,000, to break a million and stay there. According to my calculations, 50,000 is a “sweet spot.” That’s my plan.

Why the tagline and subtitle: A FOOTBALL MAGAZINE WITH A FAITH PERSPECTIVE? First of all, because it describes the magazine’s content. Secondly, because there is no such thing as “Christian football.” Christians don’t tackle softer or run gentler pass routes (at least good players don’t). This magazine will endeavor to entertain and educate the reader about football, as well as edify them in their faith. I plan on utilizing great writers that will create content that is sometimes just about the game, focusing on players that are doing something great on the field (about players that do not profess a faith in Christ) and then also content about the faith of Christian players that populate the NFL.I want to help the mission of Christians in the world by helping demolish or diminish the “us vs. them” mentality that believers sometimes have with/against non-believers. There are differences between a believer’s life and a non-believer, obviously, but I hope that First & Goal Magazine can be more of a bridge rather than a wall that is erected around believers to focus in and on themselves.

I plan on focusing on one high school program per issue and its uniqueness. I will bypass coverage of NCAA football pretty much entirely. I think this narrow focus will help and support the enthusiasm people have for the sport. There are a couple of Christian magazines that focus on all sports (NASCAR, baseball, basketball, etc) and, while I appreciate those magazines, I would only pick up a copy of Sports Spectrum, for example, to read about its football coverage. This laser-like focus I think will reflect the passion that our staff and its readers have on the game.

First & Goal will come out with 9 issues per year. It’ll be monthly during the season (from August to February) and bi-monthly during the off-season to still feed the enthusiastic appetite for the game that a lot of us feel after every season concludes. Once I find two professional football players to invest in First & Goal, I will endeavor to hire a staff. The idea of utilizing an ex high school football coach is to facilitate the interest high school coaches have in providing their players with a positive influence. We plan on working with and supporting many faith-based organizations like Navigators, Athletes in Action and others that interact with sports to edify believers active in sports.

Send me an email if you’d like more information.