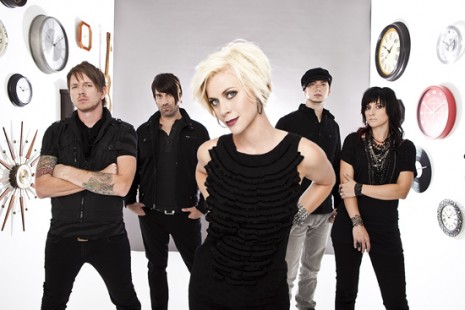 Replete with plenty of giant rock anthems, Fireflight’s new disc seems poised to stoke the career conflagration ignited by Unbreakable. Even the title and lead track of the new record sound epic: For Those Who Wait. But when I ask front woman Dawn Michele and guitarist/secondary vocalist Justin Cox what they’re waiting for, “epic” is not the word that came to mind.

Dawn laughs out loud and rasps, “Yeah, I’m waiting for the tour to wrap up, so we can have a couple of days off. We’re tired!”

Prepping for this last stop on the current tour in Lake Jackson, TX (near Houston), this hardworking band is winding up what is only the most recent onslaught of furious activity since the 2008 release of Unbreakable. Calling it “a little surprise hit for us,” Justin admits its importance to the band. “Basically, if we had not holed up in a church … and written Unbreakable kind of at the last minute, I don’t think you’d have a Fireflight to interview right now.”

Hard to imagine for a band with this much mainstream visibility, yet waiting and holding on to hope is experiential truth for Fireflight, besides being the overriding theme of the new project. Dawn speaks of a time of waiting, marked for her by discouragement and distraction, before Fireflight was ever signed.

A spiritual breakthrough integral to Fireflight’s subsequent signing and success, Michele acknowledges the universality of waiting. When asked who “those who wait” are, she responds confidently, “I think we all are. There isn’t anybody I know that hasn’t had to go through a time in their life where they were waiting, waiting on God to either come through or to just show them where they were going.”

What’s more, the title cut encourages the listener to, “know there is a purpose for those who wait.” What is that purpose? “It’s just become my personal conviction,” says Dawn, “that when we have a time of waiting, I think that God is trying to teach us something. And we may not be able to move on from that time of waiting until we’ve learned it.”

And what has Fireflight, the band, been learning? According to Dawn, “What we’re learning is that the most important thing is love – loving each other and loving the people we are there to minister to.”

“Just to add to that,” says Justin, “something that actually our bus driver told us yesterday… He said, ‘I’ve learned that I don’t know how to love ‘til I can love the people that are hard to love.’”

Asked to broaden the discussion from the purpose of waiting to the purpose of Fireflight as a band, Justin speaks up, “I think our purpose is really just to allow God to move in us where He wants us to move. We all know we’ve been called to be in this band and play music and write songs and encourage people and help people.”

For Those Who Wait won’t come as a surprise to any who have heard Fireflight before, but these ears hear better pacing and variety between tracks, less reliance on orchestration, and a few new twists. Listeners will make their own determination about how well Fireflight is fulfilling their calling to write songs and make music, but it’s obvious that Dawn and Justin feel good about recent efforts. Their second recording experience with producer Rob Hawkins (whose résumé includes everything from country rock to artsy indie rock to tween pop), there’s no hiding what Justin thinks of working with him.

“Oh, man, I love that dude! He is the best person in the universe to work with, as far as I’m concerned.” Justin tells me that in between Fireflight projects Rob had produced a hardcore band (I ask who and he says, “Write this down.” I pause, waiting for what I’m supposed to write, and everybody laughs. “Write This Down. That was the name,” and everybody laughs again.). Cox talks about Rob playing it for them. “Their cd sounds incredible! And I told him, ‘I want some of that!’”

Previously the band recorded with Hawkins in a rented studio, but this time “we actually did a lot of the work at his home studio, which is new,” Justin says, adding, “he’s got a really good feel … he knows what his room sounds like, so he knows how to make things sound awesome.”

Justin also tells me about a couple of new piano ballads the band believes will broaden their audience, specifically mentioning the track “Name.” I tell them I especially dug the transparent grittiness of the lyrics, which paints pictures of two hard realities in a hospital. Dawn offers humble thanks and murmurs, “Well, it broke my heart to write it.”

“Yeah, we’re all sitting around crying while we’re writing it,” Justin says, and we all crack up over the phone.

Dawn goes on to tell us that “it’s actually about a couple of people that we have met, one on the road and one at home… And it honestly broke our hearts, so we feel that a lot of people are going to be able to connect on a very deep level with that song.” I agree, though I don’t say that I personally favor the haunting closing track, “Recovery Begins.”

We discuss why the title track, perhaps most reminiscent of the vibe of Unbreakable, isn’t the first single. Dawn says that when another song (catchy as all get-out, and evoking the classic ‘80s and ‘90s rock and metal that have influenced the band) turned out exceptionally strong, “I think that we just decided instead of busting out the game with the title track, let’s just kind of keep the champion in the corner.” They decided to go with “Desperate” first, she says, giggling with enthusiasm, “’cause it’s just, like, really hot!”

Before we wrap the interview, I ask if they have any last things to add. Dawn says, “Just that we hope to see the readers at the shows.” Asked what their goals are when headlining a show, Justin joshes, “I think my personal goal is not to pass out or to become so dehydrated from sweating, ‘cause I sweat a lot.” As our laughter dies down, he grows serious. “We want people to feel … these songs are not just music and words. They’re stories and messages that we care about them, and there’s power behind the words. We want God to be seen in our work, not just a bunch of us, you know? We don’t want people just to see Justin, Dawn, Glenn, Wendy and Phee. We want people to see God.”