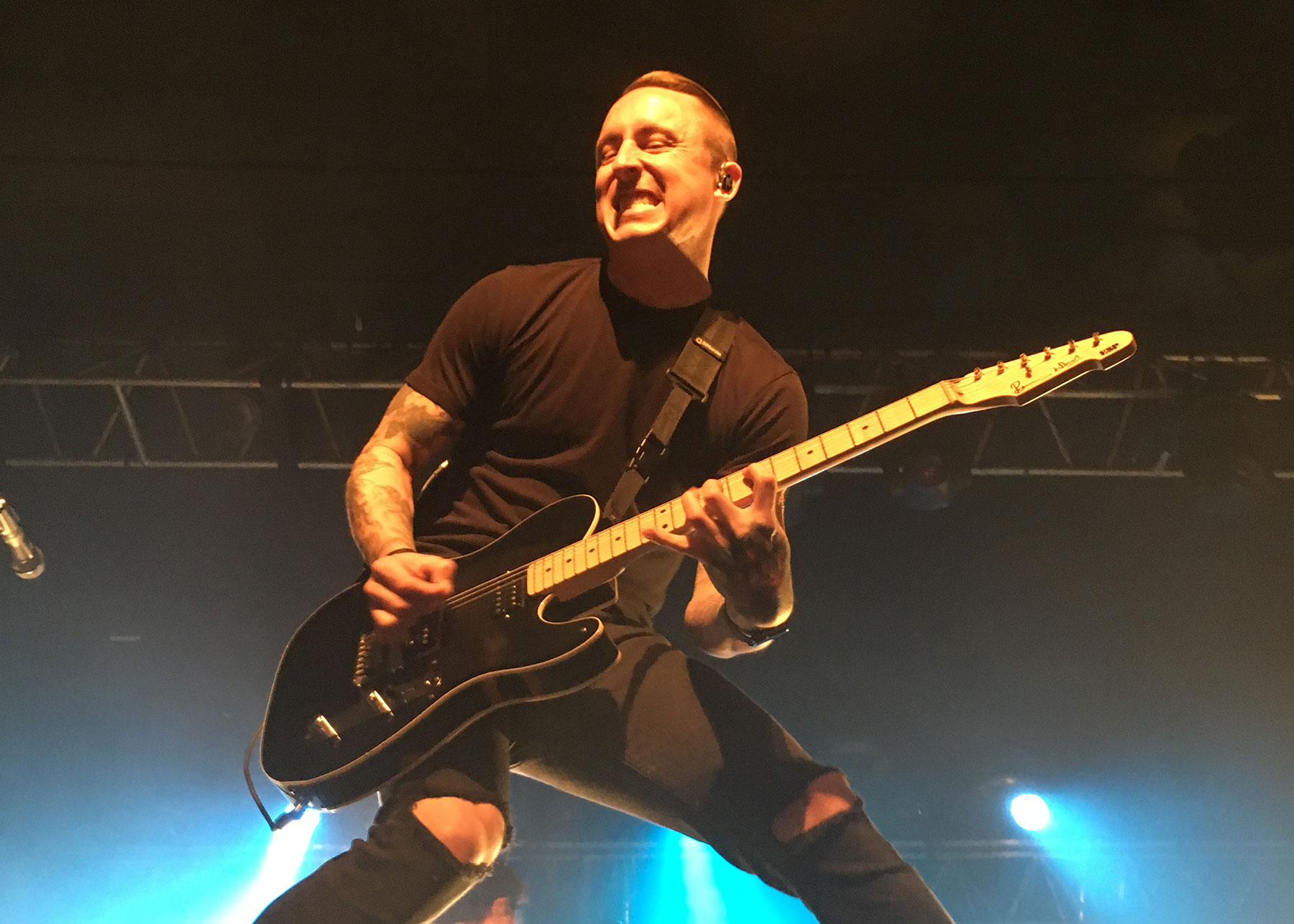 Editor’s Note: This is an opinion piece, a retrospective on the career of Yellowcard, written by HM contributor Jameson Ketchum. Ketchum will be cohosting a new podcast, Godspeed, with Ryan Pottle, beginning in late 2016.

Booming through the Roseland Theater, moments before Yellowcard takes the stage, words of advice echo through the audience: “Every video you want to take already exists on the Internet. Put your phones down. We want to see your faces, not your screens. You’re missing the point. Thank you.” This is Yellowcard’s final performance ever; I’m in Portland, Oregon to witness the event. The night is the last stop on 2016’s Warped Tour, but it will double as an overcast August day to say final goodbyes to a band who’s given them so much. I am one of those people. As the band tore through their set list, the songs represented such specific times in my life. (The songs below are ones they played in their final set.) The songs — and the albums they represent — can transport you. Come with me as I take a trip through the albums that made Yellowcard one of the cornerstones in pop-punk history.

Let’s rewind to 2003. YC’s official fourth record and seminal release Ocean Avenue blows the doors off the industry with the massive singles “Way Away,” “Ocean Avenue,” and “Only One,” not to mention the ten other flawlessly sunny tracks. Producer Neal Avron, who would become a constant presence in the YC story, aided in crafting one of the best pop records of the last few decades, a record that catapulted the Floridians from pop punk misfits to mainstream giants.

Tonight, when performing tracks from the platinum release Ocean Avenue, vocalist/guitarist Ryan Key notes, “You probably loved these songs in eighth grade.” The response to that simple notion speaks volumes as roars meet him. Any band who can outlast member changes, style changes and an uncertain hiatus have earned every accolade and bit of success they’ve encountered. 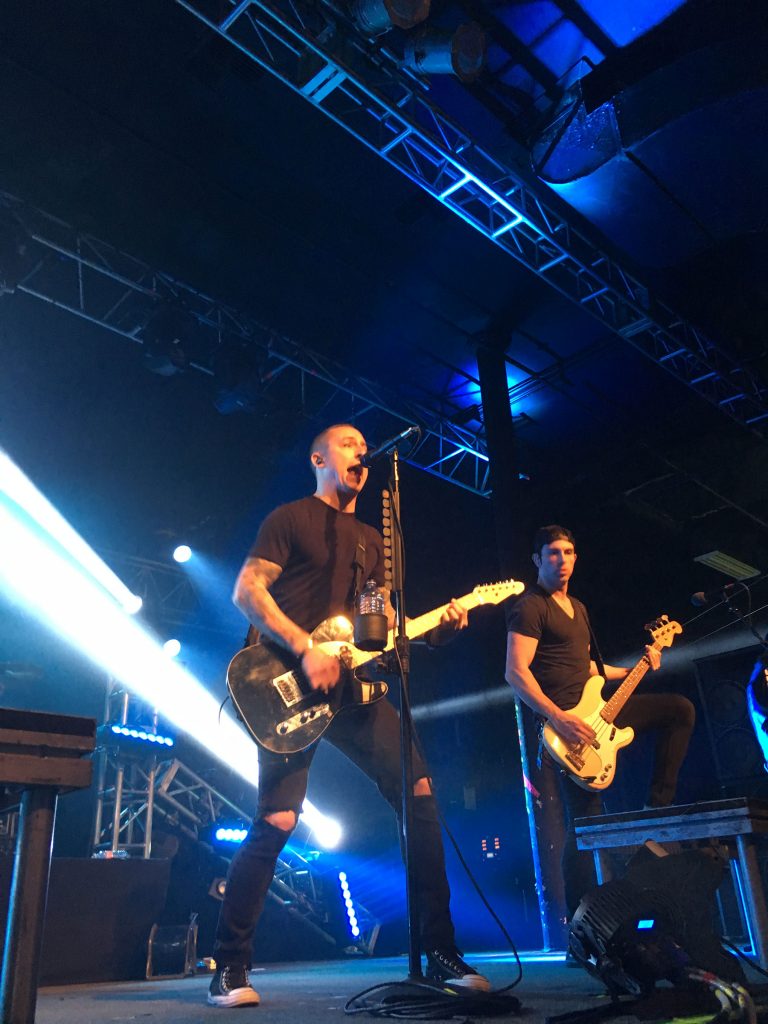 Taking a decidedly left turn by following up Ocean Avenue with Lights and Sounds, YC caught some flack. L&S was heavier, ambitious with a more serious and mature tone, leaving many fans confused. They wanted a sequel. They wanted more sunny summer songs, more pop. In retrospect, L&S was certainly a risk, but one that many bands would be too timid to take so early on during the ascent of their career. The album also happens to house some of the band’s best work, which would pave the way for the progression we hear on their final two albums, Lift a Sail and their self-titled release.

The band’s sixth record, Paper Walls, was the beginning of the temporary end. The need for a break crept in, not because the album was a poor release, but through the relentless touring and recording schedule that wouldn’t let up after the rapid ascent of Ocean Avenue. Though poignant tracks like “Dear Bobbi,” featuring Key’s grandfather reminiscing about his bride, further solidified YC’s interest in the concept of legacy, the album as a whole didn’t produce enough hits to move any needles, though it did have higher critical ratings than its predecessor. The band’s hiatus was just around the corner, a do-or-die time where members could get back to regular family life and lament the next phase — if there would be one — of the band. Yellowcard will play “Light Up The Sky” and “Five Becomes Four” tonight.

Three years passed between the release of Paper Walls and what would be their comeback album, released by Hopeless Records, When You’re Through Thinking, Say Yes. Members had gotten married, spent time at home, worked on other projects. Tonight, Key states throughout the evening that “Yellowcard exists for the chance to play songs for you.” This simple sentiment seemed to be the catalyst for their return. “Sing For Me,” the record’s highlight, was written as a tribute to Key’s aunt, someone who he cites as a large musical influence, as she battled with a terminal illness. It felt as if the break had done YC good with their seventh record producing the most beloved tracks since Ocean Avenue.

YC was up and running once again, and, over the next five years, would give us two more records before calling it quits. In 2012, the band released Southern Air and brought in guests — Tay Jardine (We are the in Crowd) and Patrick Stump (Fall Out Boy) — for the poppiest YC track ever created, “Here I Am Alive,” helping the album to a No. 10 spot on Billboard’s Top 200 chart, their second-highest debut eve, behind Lights and Sounds. 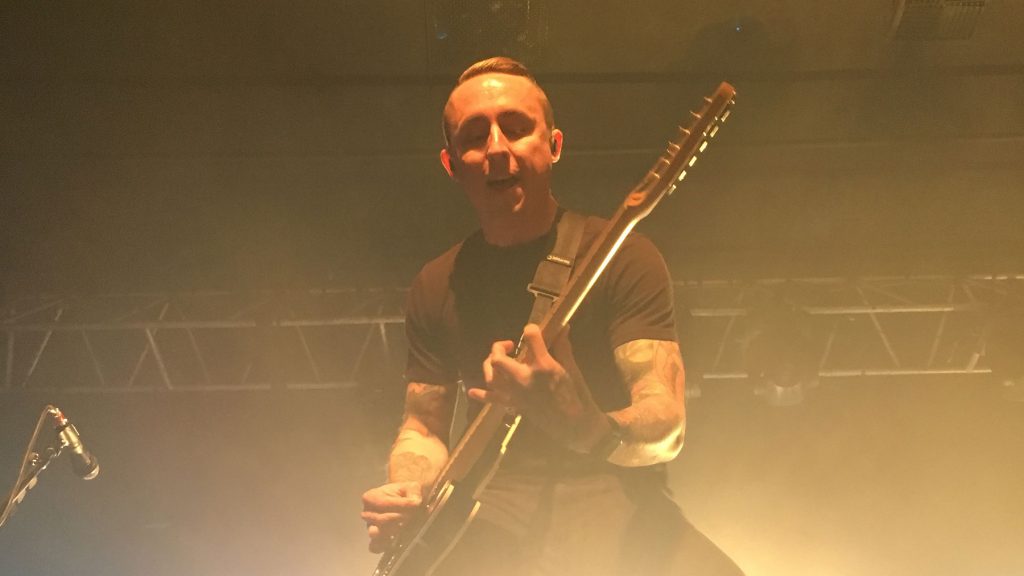 Lift a Sail came in 2014, and Key illuminates a bit on the album’s story near the end of the night’s set. The record didn’t seem to be a fan favorite but performing songs like the title track live have become a favorite part of the show for Key. On the release, former Anberlin drummer Nate Young breathed heavy life into tracks like “Transmission Home,” while “The Deepest Well” saw a surprising guest vocal from Memphis May Fire vocalist Matty Mullins. Overall, Lift a Sail may go down as a misstep to those who haven’t been invested in the band for the long term, but to those who grew up alongside their albums, it came as a perfect sign post for growing up and moving on.

The announcement of the end of Yellowcard came on June 25, 2016 as the band embarked on its final Vans Warped Tour and subsequent world tour to say goodbye to their adoring fans. It’s rare today that bands will devote six months to saying goodbye after recording and releasing a final record. Anberlin is another good example of giving their fans every last bit before bidding farewell; YC is following in their footsteps, a classy move and wonderful gift to fans who have called them friends for over a decade. Saying goodbye to a friend is never easy. Yellowcard rose to fame with some of the best summer songs of all time. They saw dozens of imitators come and go, never quite reaching the sheer magic that YC managed to pull off on some of their albums. It doesn’t feel like this farewell was motivated by a band who was on the decline or didn’t have any more art to share.

The chorus of “Lift A Sail” feels fitting: “I am ready now, I am ready now” signals a proper end, a conclusion that leaves fans saddened but understanding, ready to move on as well. Live in Oregon tonight, Key prefaced the song, stating that the track is about strength, positivity, and hope. That’s all YC ever wanted to give their followers. They’re more than a lighthearted pop-punk guilty pleasure but a poetic and underrated outfit that leaves behind a legacy of inspiration. “We want everyone to leave with a smile on their face and full hearts,” Key said before wrapping up the set with “Only One” and “Ocean Avenue,” which, of course, tears the roof off the Roseland Theater. Then, a final bow and the night is over, back to our rooms and records, on whatever avenue we call home.

I would be remiss to leave you without our essential Yellowcard recommendations. Though not all of my favorites were played this evening, you can enjoy my album-by-album choice cuts below.

Ocean Avenue songs to drive to the beach to:

Lights and Sounds tracks that will change your life:

Paper Walls songs to reminisce to:

Songs from When You’re Through Thinking, Say Yes to rejoice to:

Southern Air songs to wake up to:

Lift a Sail tracks to grow up with:

Yellowcard: A Retrospective Farewell was posted on November 13, 2016 for HM Magazine and authored by Jameson Ketchum.