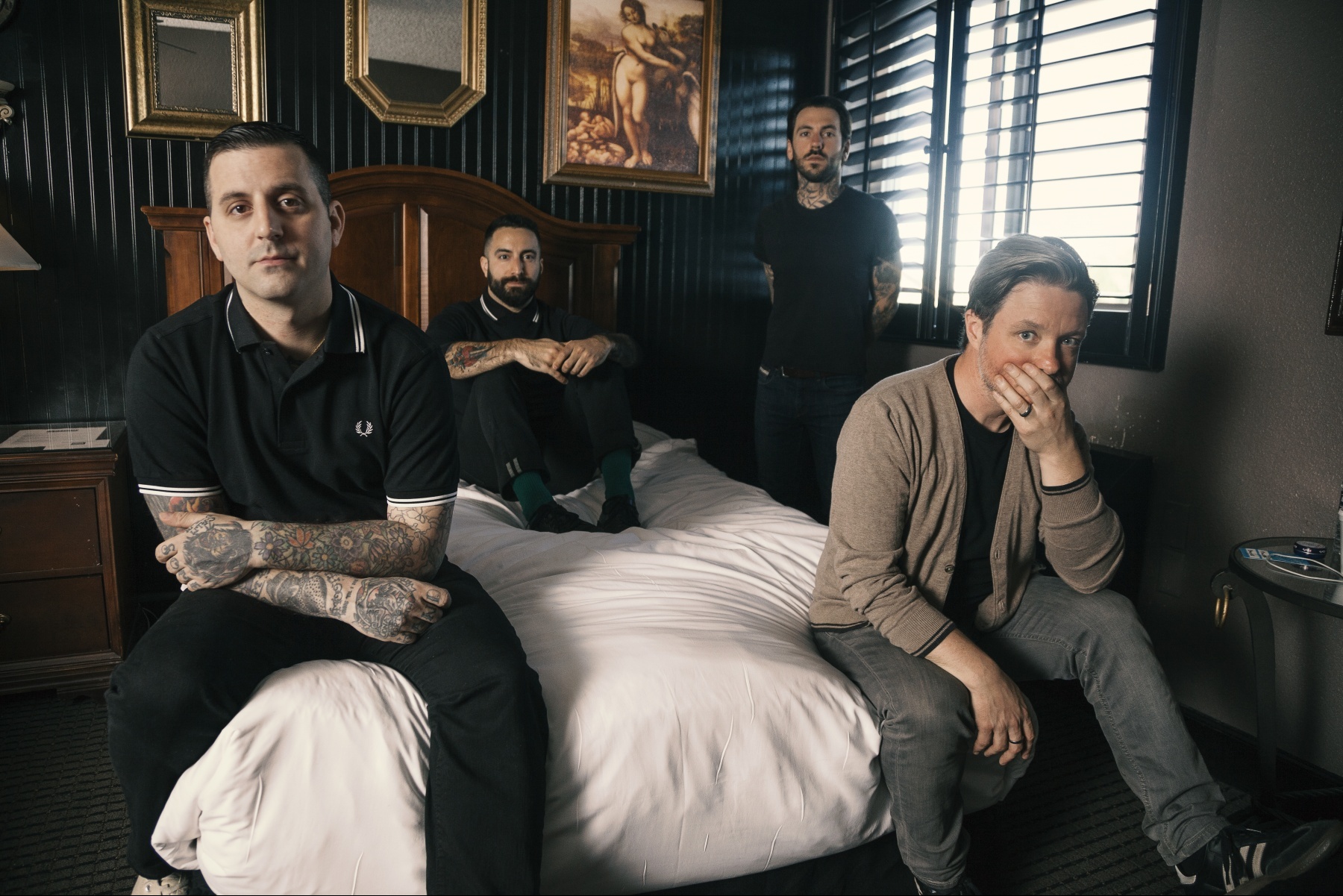 Bayside's new album: 'Vacancy.' A record about moving to Tennessee to start a business with ex-wife and family and she changes her mind. Ironically, the record feels the most fun.

It’s not often a band can say they made it through more than a decade. Bayside, a pop-punk/punk rock power, is on the verge of two of those. HM’s Jameson Ketchum catches up with bassist Nick Ghanbarian soon after the band’s seventh full-length album, Vacancy, hit the streets to get some knowledge from a band who has a lot left to offer.

Jameson Ketchum (HM): Vacancy is great. It made me go back and listen through all the old stuff, too. It’s great to go back and find songs that strike you in a different way than they did years ago.
Nick Ghanbarian: I do that with Bad Religion. It’s just a wormhole for me. I just go through every album.

After reading stories about how you composed this record, it has to be your most personal.
I think everything is very personal, and this is different, in a way, because I think a lot of the very specific things that happened over the last two years, we were next to (vocalist Anthony Raneri) while it was happening. A lot of it was on European tours, and it seemed that a lot of the issues were just him not being home. We were always there having conversations with him, so when we started writing the record, it all kind of came back for us, too.

I think everything is personal, and I think we’re such a tight knit group — as far as writing and touring — that we’re kind of all intricately intertwined at this point. This was a big next chapter for us to be side by side as he went through some stuff. To see the first drafts of songs and hear where he was going, then to hear the song (and lyrics) once he was done is just a story in itself.

The way we write music is to stay true to our sound, and we expand on that as much as we can, as far as what we’re capable of. We’re comfortable with our sound and we want to grow, but, at the same time, we need to keep the people that like us happy and embrace them. Any casual fan who kind of knows Bayside is going to say it all sounds the same. But to a super fan who comes to every show and has all seven albums is going to see that it’s different. We do read Twitter and the stuff online, and people will say, “Yeah, it sounds like Bayside.” Of course it does; it’s still the four of us.

Just to clarify, Anthony had moved down to Franklin, TN for his family, correct?
Anthony and Jack (O’Shea, guitarist) lived down there, separately, with their wives two or three years ago. Anthony’s daughter was born and his ex-wife’s parents were down there helping raise the kid when he was on tour, and that was when it all started to unravel.

And when that happened, he couldn’t just up and leave.
He wanted to be there for his daughter and not retreat to New York. We’re all over the country now: Chris is in California, I’m in New York, and it just became a solitude type of thing.

Would you say that Vacancy is the most heavily narrated by Anthony?
Certainly every record is about the previous year or two. This certainly gave us a lot of fuel. I feel like Killing Time was another that had a lot of fuel. Shudder has a song about Howard Hughes; Cult has that song, “Stuttering.” When there isn’t that emotional relationship fuel, other stuff starts to seep in.

Bayside lyrics have always felt very “underdog.” Where does that stance come from for you?
You could never tell becoming a successful, bigger band is always a crap shoot. It’s timing and other things. I don’t think our sound was ever necessarily something that was trendy, so it never got a chance to blow up. It’s always been one step forward, (then) three steps forward — and we never did anything where we said, “That was 1,000 steps forward.” I think never blowing up in a music sense really helped us stay the course.

I think we’re four normal dudes as much as we can be, being touring musicians for almost 20 years. I think that’s valuable to people. I think they see themselves in our band. A band like The Menzingers that we’re on tour with now, they’re not young kids, but this is a thing where we all fit in the same world. It’s working class people becoming working class musicians. I don’t think it’s for everyone to see that. I think people listen to music for all different reasons. We work for every single thing we have, and I think that keeps us honest and reflects our fans, too. We certainly have all types of fans, or we meet people on the street — everyone is just getting by, normal people. There is no specific type of person. It’s a huge mix of people that engage us. 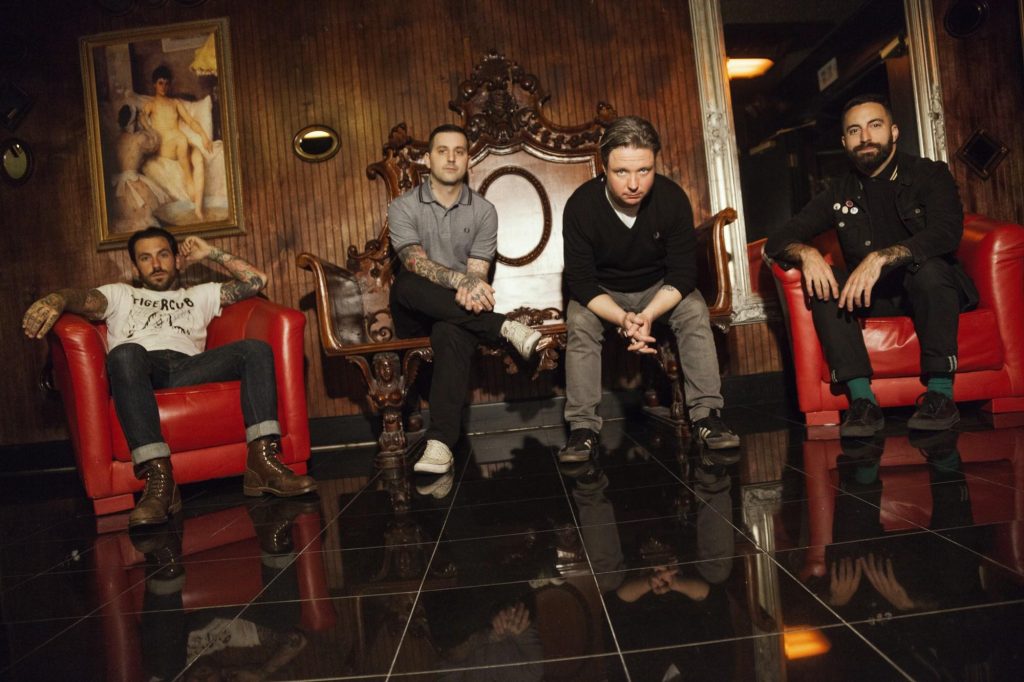 Was that ever a conversation, even early on? What lane do we aim for?
We never had a lane until 2010, and that was because it just ended up being our own lane. Up until 2009, from 2004 to 2008, we were still touring with screamo bands. We weren’t cool enough to tour with (Alkaline) Trio or any of those bands that fit in. We were just not in that world. We were more punk rock. Or because of the bands we played with, people thought we were emo or just a Victory scream band. You gotta break out of that mold of what people thought we sounded like, and 2009 is when we got an Alkaline Trio tour and a New Found Glory tour. From then on is when we really started to take those 15 or 20 steps forward where we were playing in front of people who should have liked us all along.

So far, a lot of reviews have said that Vacancy feels like the first few records. Do you agree on any level?
We laugh on the bus all the time, reading Twitter. One tweet will be like, “Classic Bayside! Love that they got their old sound back.” And the next one is, “Sounds like a totally different band!” There’s no way to make everybody happy or really be in somebody else’s shoes and listen to us the way they listen to us. It’s maddening, because we do pay attention. We’re not the kind of band who says take it or leave it. We want to keep our fans happy. We want the people who have all seven records and seen us 20 times — we want to keep them happy and coming back. It’s hard to hear us as they hear us. The people who think it sounds older? I don’t see it.

In some ways, as a writer, it is cool to hear bands do care about what’s written about them.
We’ve never had laurels to rest on — ever — and it doesn’t seem it’ll change anytime soon. That just keeps us hungry, keeps our ear to the ground, checking out what people think of us. There’s never any biting criticisms where you’re like, “That sucks but they’re right.” It’s never that in-depth. It always seems like the worst thing people could say is, “It sounds like Bayside” (laughs).

Bayside was posted on September 16, 2016 for HM Magazine and authored by Jameson Ketchum.