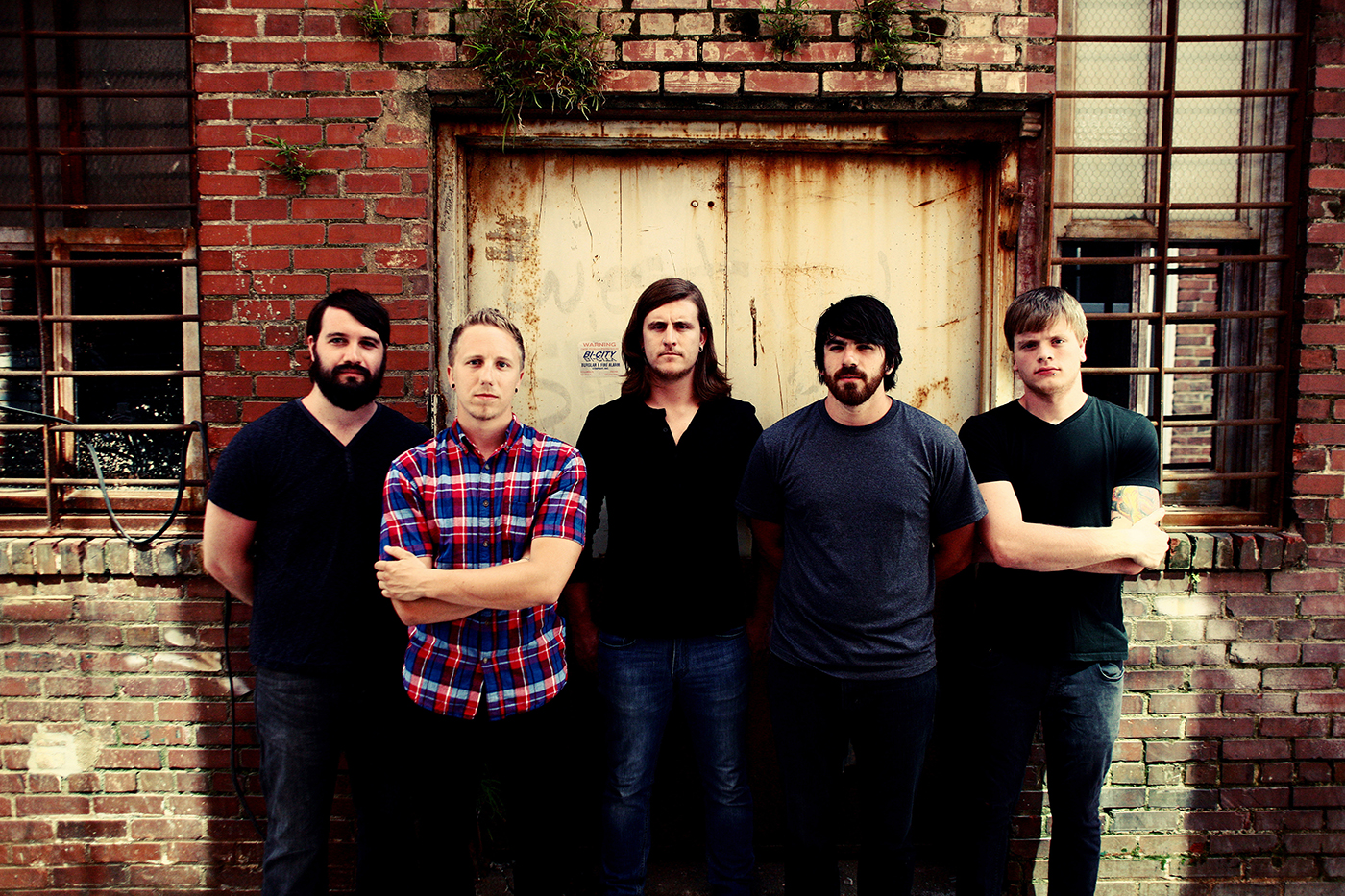 When all else fails, sanitize it with Vitamin Water and yank it out

The first time I spun a Wolves at the Gate record, a bit of nostalgia hit me. As a WATG rookie, the music being liberated from my speakers was unlike any of the heavy music you hear today; little did I know, there was slight reasoning behind that. With silky choruses, unforgettable rhythms, well-thought-out lyrics and melodies that refrain from becoming maddening or predictable, I felt like I was listening to a band from decades past. I had the pleasure of talking to clean vocalist and guitarist Steve Cobucci while the band was on the road, touring to support their sophomore release, Captors. We yakked about their new EP, their tour and even how Cobucci utilized a pair of pliers and Vitamin Water to confiscate their screamer’s tooth.

What are some key elements that you think genuinely separate this band from the rest?
Heavy music has always been a chameleon, in a way. It is always changing. The music we all grew up listening to, the music that got us into heavy music, is completely different than it is today … So we are really seeking to be nonconformists. We don’t want to be trend setters; we want to be a band that establishes a different form of heavy than the norm for most bands. That’s what we try to do, and that’s what, I think, separates us.

Post-hardcore, for me growing up, were bands like Thrice and Thursday, and now post-hardcore is way heavier. The big thing that has changed is that bands now compete with each other. More or less: Who can outdo one another? Who’s got the most angry or pissed off record or who’s got the most edgy thing today? Back then, there was a lot more comradery. There were no real gimmicks to the heavy hitters.

Lyrically, those bands wrote a lot of meaningful things, and for us, all of our lyrics are about the gospel. That’s because it’s something that means everything to us! The gospel is everything to me. It’s why I exist, and it’s why I’m in a band. That’s the realest I can be — and people think that’s really cheesy to be open about your faith so many times — but at the end of the day, we believe we are being completely more honest with our fans than the large majority of artists who are writing lyrics that appeal to our culture as opposed to what is actually going on in their heart.

Is there a certain standard you like to meet when writing a song?
No. We want to be songwriters, and we want our songs to have a certain feel. If I write a song that kind of feels like something else I’ve already done, we scrap it. So that’s a standard! I don’t like to have a song that sounds like another song on a record. Some people may disagree, but our goal really is to diversify as much as possible.

Lyrically, some people may think we write about the same thing over and over again in writing about the gospel, but the gospel is the most pumped text of history, of man, philosophy and literature, and for someone to think that I can exhaust the depths of the gospel would be foolishness. There are men who have dedicated their lives to studying the gospel who are much more intelligent than I am, and they did that for 70-80 years.

Where does the band draw its inspiration?
Musically, (the bands who wrote the songs we cover on the latest record) inspired us. Those bands are Blindside, Thrice, Thursday and The Receiving End of Sirens. Bands like that were really crucial to us wanting to play music, creatively; they pushed my understanding of creativity within music.

I’m also inspired by a lot of writers. For example, Charles Spurgeon was a writer, but also a preacher more than anything. He wrote and said some of the most beautiful things I’ve ever read in my life. He has such an awesome way with words that is so classy and artistic. C.S. Lewis is another.

The big thing that has changed is that bands now compete with each other. Who can out do one another?

With the new digital EP out, let’s chat a minute about Back to School. Why cover songs?
We’ve never covered any songs before, and we were trying to think of an idea for a short EP and what to do with it. What would be something we would do? A lot of times, at shows, people ask me who my favorite bands are and I tell them those bands. Then, they ask, “Who are they?” or they reply with “Those guys suck! You guys are way better!” And I’m all like, ”You’ve lost your mind!”

So it’s more of a way for us to indoctrinate people that listen to our music. (To me, some are our old-school classics!) It’s called Back to School because some were songs I listened to when I was in high school, so now the same age as most of our listeners. I’m 27 and our bassist is 28, so we are generally a decade older than most people at our shows. There’s a big enough gap that they’ve missed out on some pretty rad music, and maybe we can encourage some of them to go back and see why we are the way we are.

Lyrically, the band is pretty rooted in your faith. Can we expect the same for the cover songs?
I wanted to be really careful about what songs we chose because of that exact purpose. The only band that really made it clear they were a band of faith was Blindside. I know the vocalist and lyricist for Thrice is a believer. The other two songs weren’t Christian bands, but the things they wrote about were things I agree with, and are things I think are helpful to people.

How did you like recording the covers verses original pieces?
It was more fun, to some degree. These songs are way better than anything we’ve ever written, so it’s fun just to track and record some of these great songs. For me, I’ve been singing these songs ever since they came out, which has been like nine or 10 years, so I’ve had a lot of practice, making it pretty easy when I went to track vocals. We’ve taken a little liberty with the songs, but we really tried to stay true to the originals (and still) give a little twist on it from our perspective.

So we can expect some Wolves at the Gate flare on these songs? And, if so, what gives them that “brand”?
One thing I think goes across the board is that these are all bands that were phenomenal live. They’re also bands we’ve all seen live, as well. We really want to communicate the songs live like they were communicated to us.
I’ve seen Thrice more times than I can count, and the way they play “Deadbolt” live is different than how they played it in their studio recording. I would like to capture that. Any true fan will notice a lot of the changes (for Thrice’s live set). We did an alternate ending for a song that is not in the recording, but we do something similar to what they do live. Any real fan of Thrice that has been to their shows is going to hear a version that I think Thrice wished that they had recorded. You can or can’t quote me on that one … who knows? Maybe I’ll get an upset email from the members of Thrice on that one.

Everyone wants to hear about the tours, so what’s new in that area?
We change our set every tour. We try to always give people a different look to our band and a different feel or element to our set list. The set list we have for this tour I’m pretty excited for because it’s very high energy. We are going to be all over the place on this tour, all over the U.S. We are looking forward to seeing different places. We are hoping to go to the Fender factory. We use all Fender guitars, and we just started working with Fender.

Are there any choice cities you guys are looking forward to playing?
California is always fun. Texas always has the best shows. Always! Something has always happened where it never worked out on a certain tour, so this will be the first time for us to play NYC and we are really excited.

Does anyone have any fun tour habits we should know about or good stories from the road?
The most recent tour story that comes to mind was while in Connecticut, on the way to a show, we were eating at a pizza shop. Nick bites into a piece of pizza when suddenly he gets this horrific look on his face. We all wondered what had happened and he told us his tooth had just broken … We looked in his mouth and it ended up being one of his top molars. He was distraught the whole day and we knew it needed to be pulled since the other half was basically dead anyway. I finally convinced him to let me pull it. I grabbed some needle nosed pliers, sterilized them with a little bit of Vitamin Water and got up in there. With my foot on his chest, I pulled it out. He took it like a champ!

Can your fans expect anything different from this tour?
We generally tour with a lot of super heavy bands, and there is a lot of singing in our music, which usually makes us the band that sticks out. I think we fit in a lot better with the bands on this tour. Actually, this may be the first time we are the heavier band. It will be a cool and different sort of tour for our fans to see us on.

Have you taken any of the covers out on the road yet?
No! I think we wish we would have, but we may try to pull something together and have it ready in our back pockets. If we think we can make it work, that would be awesome.

Are there effective plans or projects on the horizon for another LP?
We are going into the studio in November; we will be recording for a little over a month. So we encourage people to pay attention to our social media sites. We are going to be throwing up a lot of new stuff coming into the fall: acoustic videos, tour updates and gear walkthroughs. Once we get in the studio, there will be a lot of stuff rolling out for our fans to learn more about our lives.

Wolves at the Gate was posted on October 7, 2013 for HM Magazine and authored by Chelc Eaves.