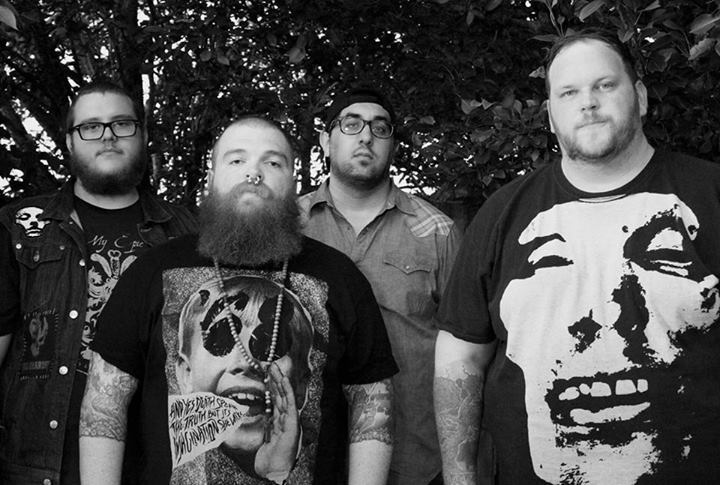 When I called Ian Harvey of UGLYTWIN, he was just getting out of his car. I wanted to give him a few minutes to get settled before calling him back to start the interview, but from his first greeting, I heard a voice that was calm and friendly, the opposite of the roughness you hear from him in his music. I had never heard of UGLYTWIN before but after checking out their upcoming album, Oh, The Cost, I got the same vibe I get from listening to bands like La Dispute, The Chariot, early Drop Dead, Gorgeous and Norma Jean. It’s a well-balanced band with a variety of genre influences that carries powerful message throughout the album. I got to find out exactly what that message is.

Tell us a bit about the history behind the making of UGLYTWIN.
In 2009, I met this guy named Michael. He was a guitarist and drummer and we decided we wanted to do a heavy project. When we stared writing together, we noticed our music had an older ’90s metalcore sound. We began playing as The Brigade for several years, but due to line up changes and circumstance, we changed our drummer and decided to shift our writing direction a bit and call it something new. We changed it to UGLYTWIN about two years ago, and it’s been that ever since.

The name came from a song we wrote as The Brigade. We jokingly said if we ever changed our name, we would change it to that.

You have a very unique band name and logo. What inspired the name and design? To me, it looks like a cross on top an inverted cross.
Very good; that’s exactly what it is! It may seem strange, but I feel like the Holy Spirit kind of drew that. I was sitting at practice and Michael and I had been talking about the concept of what inverted crosses meant to us, specifically: a sign of humility. We took that symbol, drew it and put a smaller cross on top to represent who we’re supposed to be: a tiny Christian reflecting God, instead of other way around. We drew a circle to create a feeling of unity, and I went home, messed with it, and the core reflection became the unofficial symbol of UGLYTWIN.

We started using it as an idea that we’re all striving to reflect God well, but ultimately we fail at even our best moments. We need to continue to reach out to each other in that struggle. We are united in our inability to obtain perfection from God, and that if we stay humble and level, we can understand each other.

That’s incredible. It reminds me of how we can sometimes be like the Pharisees who got so hooked on trying to be good and righteous when they missed the whole point of grace. It’s nice to hear your music sends the message that we are all broken and it’s our loving Savior who we can trust and have hope in.
I came to a realization as I’ve grown as a believer – I’m older than most starters of hardcore bands. I’m this guy that is struggling with addiction, with the view that we’re all kids who have sin, we should stop engaging like we’re above or below anyone else and see each other as people. That’s the core reflection: unifying, humbling, if that makes sense.

Your upcoming album, Oh, The Cost, will be out soon. Tell us about the lyrics. What message does the album aim to convey?
It’s about taking a concept and bringing light to an ugly part of some aspect of faith or society, and, at the end, drive hope for a unifying view. For me, each song was always, “If I had two minutes to stand up on stage and tell people something from my heart, what would it be?” I write the songs in that manner. The album deals with a wide array of things, like the idea of Americans and how we always look to God in peril, but when we’re prospering, we don’t want Him or don’t need Him anymore. “The Mirror” is an explanation of what the core reflection was. Other songs deal with wanting to be free, and what it’s like being at shows. I always try to take something simple and try to shine a light through it and bring it back to the fact that we’re not in control.

Its funny you mentioned “The Mirror.” Listening to that song it’s evident you play with a variety of sounds, from steady hardcore beats to eerie technical segments. Which parts of your songs get the best reaction from fans at concerts?
The hardcore and metal scene, in general, is dominated by a smaller, “poppier” version of the genre, which isn’t necessarily a bad thing. It’s become a bit more accepted, but with that, people’s expectations get a little strange. What we find is that people have to hear us a few times to get what were doing. It’s hard for us to make a good first impression. We don’t get the immediate reaction we want. I think after a while, when they understand it that will change. We really try to put in some complexity but don’t overdo it. We see some good reactions. When we play with bands that like our type of hardcore, other bands end up over by Michael’s section, checking out what he’s doing. We constantly get compliments on our drummer. We’re pretty wild on stage. From a musical standpoint, it takes them a while to understand it and dig it.

Come to Toronto! People here love it. Heavy bands come to Toronto and hang off the ceiling poles and fans just eat it up. You get that with bands like The Dillinger Escape Plan and all those crazy guys that get up on stage. “We’re gonna play music, but give you a show. That’s what we’re here to do.”
We remember all those shows and, ultimately, every band wants to be memorable. It drives a lot of bands to put on the best shows they can.

A lot of metalcore music these days is really focused on promoting the “self-gods” concept, teaching youth to be their own masters. The message in Oh, The Cost seems to bring it back to truth where we’re not in control. God is.

We want to be as honest as possible. I remember a vow I made to an early version of The Brigade. We wanted to be honest with who we were, and we’re not perfect dudes. We’re all struggling, and we all have demons we fight. But at the same time, we want people to know we know there’s hope behind that. You won’t be consumed. There’s a God who guides you through in ways you don’t understand, right when you’re in the middle of it.

A lot of what’s missing from heavy music is a genuine nature. I’m not saying we’re the most genuine people on the planet, but I think there needs to be more of “What you say on stage is who you are.” Own it. If you’re terrible, that’s what it is. If it’s encouraging, own that. Be encouraging off-stage, too. Don’t do it for people to say, “What a nice guy,” without actually being nice to your fans, too. For us, our goal was always to be honest and so I hope that’s what we do.

What we find is that people have to hear us a few times to get what were doing. It’s hard for us to make a good first impression. Ian Harvey

What’s ahead for Ugly Twin?
We still have to do stuff after this! As always, our goal is to play as many shows as possible, which is not as many as we would like right now, but we’re hoping with the album coming out we’ll be able to go to new places and talk to new people, see new bands and travel more. We’re hoping to keep spreading the ugly news, more or less.

We’re working on a music video right now and we’re already writing for the new EP because we run through our set. So like I said, some of these songs are two years old because it takes a while to get through the process. I think the plan, as it always has been, is to take every opportunity we can and stay as busy as our lives will allow.

UGLYTWIN was posted on August 16, 2014 for HM Magazine and authored by Sarah Dos Santos.