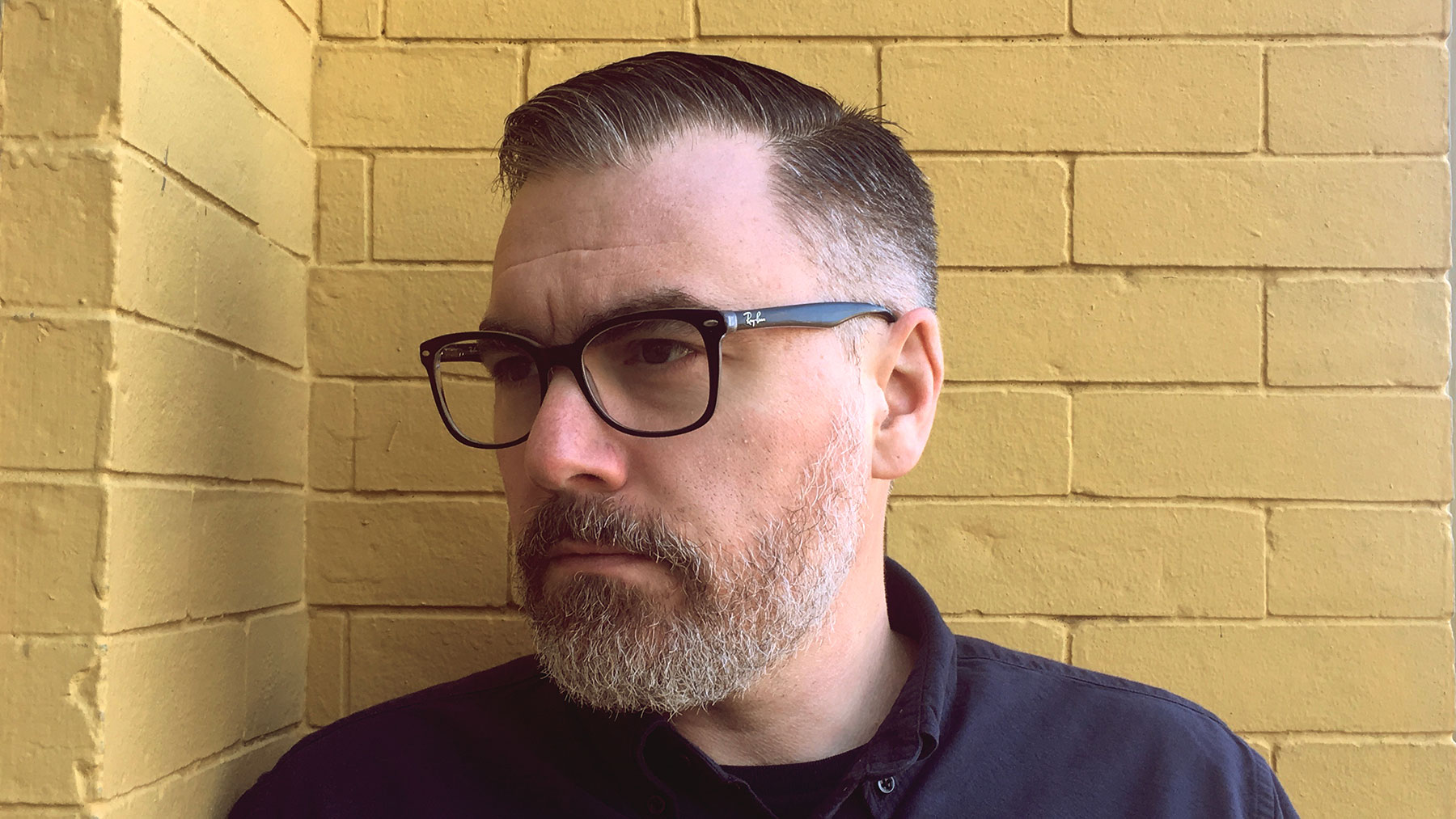 Here Until it Changes

Singer-songwriter TW Walsh is charting his path through an increasingly insular world, documenting the hazy reveries that come with a culture detached. Feeling out the folkways between fear and liberation, he lays these proofs bare on ‘Terrible Freedom’

When David Bazan sang, “I trust T. William Walsh and I’m not afraid to die,” on Pedro the Lion’s “Bands with Managers,” the heuristic frontman wasn’t only admitting automotive confidence in his van-driving bandmate and prime Pedro collaborator, he was also affirming the dark horse musician who had come to embody a fair share of the acclaimed outfit’s creative cache.

Walsh’s contemporary research continued the cryptic rock saga of Songs of Pain and Leisure (2011), another token of the musician’s determined spirit. Clearly, Walsh is no novice. He began his solo career with 1999’s How We Spend Our Days, followed by his cooperative stints in Pedro the Lion, Headphones, and a spell fronting New England rockers the Soft Drugs.

Now, Walsh will unleash Terrible Freedom, his fifth full-length record (sixth if you count the Soft Drugs’ 2013 double-EP reissue) and first solo run under his own Tower of Song imprint. The rock and roll Renaissance man calls it “an album about fear and liberation” on the project’s Kickstarter page, signifying the uncertain era we inhabit.

As long as there are machines to rage against, sociopolitical anxiety will inevitably inform creative reflection. So, what does an album about fear and liberation mean for Walsh? “I think the themes are more existential and universal than political,” the musician tells HM. “But it really applies across the board. We live in a country that extols these values of compassion and liberty, but I’d say our government isn’t really holding up its end of the bargain.”

The disillusionment doesn’t end there. While the populace devours Internet memes and streams viral videos, Walsh propounds, a growing collective impunity only amplifies egoism and emptiness. “We just distract ourselves from real life with drugs and entertainment and social media,” he says, invoking the panaceas of modern life. “We’re going to entertain ourselves to death. It’s a dangerous place to be.”

Walsh tackles this critical juncture on Terrible Freedom’s initial offering, “My Generation.” Unrelated to the Who or Limp Bizkit titles of the same name, its handle highlights Walsh’s coy knack for inverting the nomenclature readily adrift in the rock pantheon. (It’s a practice the songwriter has employed since, at least, the Soft Drugs’ meta-anthem “Let It Be.”)

And it will catch up. Lest you assume Walsh’s work is solely based in cunning reference, consider what he’s illustrating. The clever callbacks drape a catchy but ominous corollary for generational disaster. Are we laughing at our downfall? Sarcasm can assuage, but distraction won’t ward off destruction.

“The lyrics are just pointing a finger at our modern value system,” says Walsh, 42. “Even with people my age, it’s like I don’t hear from my friends on the phone anymore. Everybody just texts, everybody Facebook messages. Whereas we used to get together and hang out and talk about what’s going on, now everyone just keeps in touch by liking each other’s photos online. It’s just a bummer. That’s not real life.”

I’ll sit right here until it changes
It always changes anyway
My generation’s full of strangers
Who wanna stay inside and play
— TW Walsh, “My Generation”

“I had to get off Facebook at a certain point,” Walsh continues. “Everybody was mad about something, especially after this presidential election. You couldn’t avoid it. Media consumption and your communication with friends and family used to be separate things. You could discuss these issues with them, if you wanted, but now it’s just one big pot of regurgitated news. People aren’t connecting on a real level.”

Walsh chops away at culture’s crossed connections on “My Generation” and Terrible Freedom. The album title’s equivocation underlines its caustic content as well as the independent nature of self-releasing the record, a crowdfunding operation the musician calls an experiment. A testament to Walsh’s pull, the Kickstarter for Terrible Freedom reached its initial funding goal in just a few hours.

“I wanted to see if I could do it on my own,” Walsh says of the album’s DIY, fan-backed release. “One of the advantages to being on a label is to be a part of that promotional infrastructure — and I really like working with Graveface — but I just wanted to give it a shot. It’s really cool that I had enough interest to pay for the record’s pressing.”

The crowdfunding approach also gives Walsh an endpoint. As of late February, the album’s still not completely finished. Bereft of an outside label’s framework, he knows he has to cross the finish line alone. “I wanted some way to have a deadline for myself,” Walsh says, “so I started the 60-day Kickstarter. I have about eight songs that are mostly done, then I have to write and record two more. I’d say I’m about 80 percent done.”

Upon its release this spring, Terrible Freedom will be a solo album in the truest sense of the term. On Fruitless Research, Seattle musician Yuuki Matthews (Sufjan Stevens, the Shins) served as Walsh’s sonic collaborator, helping to mold and shape the recordings into the heady narratives that comprise the 2016 collection. This time around, Walsh is performing and recording the album unassisted.

“He did a lot of editing, overdubs and mixing on the last record,” Walsh says of Matthews. “When I decided to finish this new album for an April release, I did contact him to see if he could work on it with me. But he’s just been pretty busy; he has a lot going on. So I ended up deciding to finish the record totally on my own. I’m playing everything on it, writing and recording everything. No collaboration on this one.”

The solitary production environment for Terrible Freedom offers its creator a streamlined approach to record making. A reaction to Fruitless Research’s fuzzy aura, Walsh says the new album will be more pristine than the last. “It’s an interesting sound. The last one was really saturated and kind of distorted. This one, I wanted to make it a cleaner, high-gloss sound. There’s still tons of drum machines and synthesizers on it, but it’s more high fidelity.”

Once the album’s songs are completed, Walsh will mix and master the new record himself. These final engineering steps make up a large part of the musician’s creative arsenal, and he runs a successful audio business, TW Walsh Mastering, out of his home. “I do over a hundred projects a year, easily,” he says about his music company. Walsh’s mastering discography consists of albums from Damien Jurado, Clap Your Hands Say Yeah, Cold War Kids, and nearly a thousand others.

As for his own music, Terrible Freedom isn’t the only thing Walsh currently has up his sleeve. This year will also see the debut release from Lo Tom, his new rock band with Bazan, Starflyer 59’s Jason Martin and drummer Trey Many. “It’s just a straight up rock and roll record — two guitars, bass and drums,” says Walsh of Lo Tom’s album. “Dave (Bazan) wrote all the lyrics and vocal melodies, and Martin and I wrote most of the music. We’re gonna play some shows in the summer, too.”

One of TW Walsh’s signature solo songs, “Monterrey,” from last year’s Fruitless Research, was conceived during his travels to California for the Lo Tom sessions. The curious composition says a lot with very little, and it’s the perfect encapsulation of the musician’s psychedelic storytelling and workingman accompaniment. The pertinent chord change brewing in his head for some time prior, the song’s lyric surged forth after Walsh experienced food poisoning from a Mexican restaurant in the Golden State.

“It’s just kind of a fever dream based on imagery,” Walsh reveals of “Monterrey.” “Southern California feels like such a different world to me from the Northeast. It comes from that headspace a little bit, but it’s not really about anything in particular. I write in kind of a stream of consciousness way, so I don’t usually start with an agenda. I chose the name ‘Monterrey’ to fit with that California vibe, but spelled it like the Mexican city to evoke something maybe a little bit more mysterious.”

“Monterrey” is just one of Walsh’s enduring entries that suspend space and time in the course of a three-a-half-minute head trip. When asked of his influences in music-making, Walsh lists the quintessential rock models, few of which can be blatantly detected in his own rare craft. “I’d say the Beatles, the (Rolling) Stones, Neil Young, Leonard Cohen. The classic guys, even though it’s tough to narrow it down to a handful of artists. You know, I love the Talking Heads, the Police, Elvis Costello. I loved hip-hop in the early ’90s.

“I’m interested in good music,” Walsh states matter-of-factly. “I’m not really that interested in new music.” However, he says his two sons often introduce him to recent indie and rap artists. “My younger son likes a lot of indie rock, mumble rap and trap music. My older son is more into classic rock and jazz. But there’s enough music already,” Walsh laughs. “If nobody ever wrote a new song again, myself included, we’d have plenty to listen to for all eternity.”

The stated adherence to rock and roll archetypes belies Walsh’s forward-thinking proficiency. Sometimes, there’s an artist meant for his time and place. A musician who unassumingly captures the odious zeitgeist, tirelessly churning out poetic truths in timeless compositions on a dime. He works full-time, supports a family and still makes room for healthy creativity — that of his own and many, many others. He writes and records songs, he engineers albums, he even builds guitars. He fits right in there. His name is TW Walsh and he’ll be here until it changes.

TW Walsh was posted on March 19, 2017 for HM Magazine and authored by Philip Trapp.