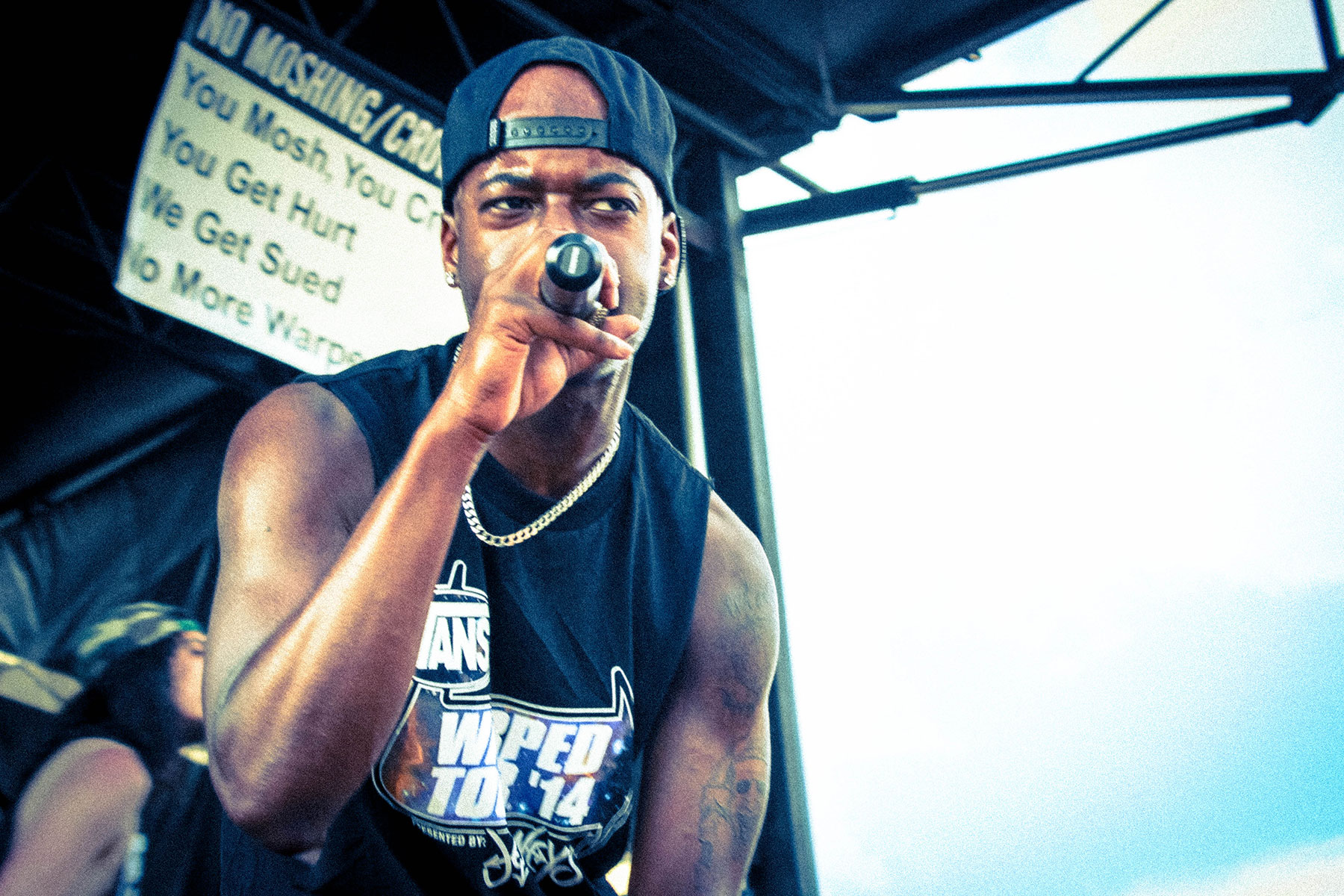 PLUS! A bonus interview with Ben Bruce, the man who signed them

It’s somewhat remarkable I can even write that sentence in earnest, as the band has two frontmen — Frankie Screamz and Chris Jungles — and they are both assuredly rappers. (Frankie takes care of the bulk of the screaming.) There was a time when rapping over rock was profitable, maybe even the biggest selling genre on the market, but somewhere along the way, Limp Bizkit’s take on starfish and water brought a cultural conclusion to what could have been an otherwise happy marriage. As one who lived through it, the genre adopted such a negative connotation, it felt like our children’s children would suffer musical suicide if they picked up a seven-string while a frontman used his or her deathcore breakdowns as beats. Some old-schoolers will probably hold on to that mantra for life; a popular metal website wrote about the band that “there is nothing redeeming about” their music, hoping for the dissolution of the universe at the hands of the Mayans than be forced to listen to their nu-metal incarnation.

But factually, they’re wrong. People are coming out to see Scare Don’t Fear, and they’re coming out to hear nu-metal again. They’re sharing real estate with bands like Islander and Issues, guys that have charted with a mix of down-tuned guitars and hip-hop roots.

The band is meeting with me on the first day of Warped Tour, a dream gig for a new signee like them. They haven’t performed yet, but the two vocalists are in mid-season form, and their energy is infectious. They both talk with Jersey accents, but Frankie’s is especially thick, it’s almost endearing. It’s true character bleeding through, particularly poignant as Frankie tells me the band has “never once stuck to just one genre of music” while recalling his influences, and I partially believe him. He may jam pop-punk in the car, but with Jungles, drummer Larry Ohh, bassist Ryan Grandmaison and guitarist Joe Auger, my bet is they stay heavy. They’re too intelligent about the music world to blow up a good thing. Heavy fits them well, too, and with their rapping, the polarizing wave that comes with nu-metal will carry them.

Frankie and Jungles have a well-balanced mix of comedic timing, self-awareness and hip-hop bravado, it only adds to the band’s character. As we are talking, a nearby reporter from Fuse TV jumped in to see if the band was next with them. “Nice to meet you,” she says to us. Frankie and Jungles both smile at the attractive talent. “Nice to meet you.” I wonder aloud if the two are with her next, and none of us have any idea. “Scare Don’t Fear?” I ask her. She checks her time sheet. “No, we’re not with you guys.” Without a beat, Jungles says goodbye. “You should be with us, though. You’re f-cking up if you’re not with us.”

The frontmen have a great chemistry, something necessary to succeed with two guys manning the mics. Listen to this exchange we had after I found out Jungles was new to metal when he joined the band:

Jungles: I had never heard any metal stuff. At first, it was just Larry’s beats. It was just strictly—
Me: Alright, hold up. No metal? So when you first got in the metal scene, what was your first thought after seeing the crowd participation at a show?
Jungles: I was blown away. Honestly, I was like, “What the f-ck is this?”
Me: (Laughs) That’s what everybody says. “Is that dancing?”
Frankie: He wasn’t used to the crowds. As far as the local scene goes, he was playing a lot of local hip-hop shows where the crowds didn’t show love. There was a lot of statues. But then when he came with us and started playing some shows and seen how our type of fans reacted, he was pretty much sold.
(To Jungles) I love how I’m answering questions for you.
Jungles: You should, though.
Frankie: (Laughs) This is my boy, I’m going to answer all questions for him.
Jungles: I mean, come on. You’re at a show, have fun.
Frankie: Yeah, did you come here to hate? That’s going to be you. I’m going to get up here and do my thing.

More and more people started to catch on, too. Scare Don’t Fear hired Street Smart Management to help corral tasks; the band had been fielding label offers, but no one was taking them as-is. “None of them were talking to us the way we wanted,” Frankie says. “We’d go talk to somebody at a label we looked up to, but they’d be, ‘We think you guys should be a little bit more heavy.’ Or another label would be, ‘We think we should ease back a little bit on the metal and just do more hip-hop.’ We’ve found our sound. We like what we do. This is it. There’s no changing.”

Two hours later, I’m sitting across from the man who agreed with him. Ben Bruce is most known for his guitar work in Asking Alexandria, but he’s ascending the ladder, and, with his partner and longtime band co-manager Kyle Borman, he’s investing his knowledge in the co-ownership of a record label, KBB Records.

If you’re a musician, you want to work with him for two reasons:

The first act KBB ever signed was Scare Don’t Fear.

As luck would have it (like I said, call it what you will), Street Smart shares the same entertainment lawyer, Eric German, as Bruce’s Asking Alexandria. In fact, I had already planned on meeting with Bruce later, but after meeting Scare Don’t Fear, they’re all I wanted to talk to him about. I mention to him I’d seen them earlier and tell him the band seems to have a good head about them, willing to put in the work but also to knowing when to have fun.

“That’s one of the best things about them, that they’re so down to earth,” Bruce says to me. We’re sitting on a built-in square table next to the catering squad, and Bruce has no problem talking about the band. “They’re so ready and willing to get out there and really, really bust ass. There’s a lot of lazy f-cking bands that get signed, and they think that’s it. We’re going to get big. What are you going to do for us?

“It’s like, well, it’s a two-way f-cking street, man. We can only help you as far as you’re willing to go. You need to put the hours in. They really want to do it.”

Is that what stood out when you first saw Scare Don’t Fear?
Other than falling in love with their personalities and their work ethic, it really was the style because it was just so fresh for me. A lot of bands have started to sound the same, and it gets very monotone and monotonous and boring.

This reminds me of old school P.O.D., Papa Roach, Limp Bizkit, Linkin Park, but it’s modern. There’s a whole modern twist on it.

Derivative.
Derivative, exactly. Perfect. Derivative and it’s boring. I heard these guys, it was like, damn, this reminds me of old school P.O.D., Papa Roach, Limp Bizkit, Linkin Park, but it’s modern. There’s a whole modern twist on it.

I read a quote from you that basically said (you and partner Kyle) know the industry backwards and forwards, so starting a record label was obviously the next move.
I have a great relationship with my record label, Sumerian. I know behind the scenes they’re in the office every day. They wake up, they go to work, go to the same place and they do what they do. They don’t know, really, what it’s like to be out on the road 24/7, all the time, all year. They can’t possibly know firsthand the stress, the impact it has on relationships and even just as a group — just keeping the band together is stressful.

They actually brought that up. I asked them, “Why KBB?” Because they said, “We don’t want to change you.” Every other label wanted them to make some kind of change. They really appreciated the opposite of that about you guys.

The reason you’re a musician in the first place is because you love art. You love to create music. You love doing you. This is all a part of you that you’re putting down, whether it’s pen and paper or your guitar or your drums, whatever it is. That’s a little piece of you in there.

I cannot tell you how stressful it is and how insulting it is when you’ve poured your heart into something and someone goes, “Ah, no, you need to change it to sell more.” What? That’s not why I started playing music in the first place. That’s not why anyone starts playing music. If it is, then they aren’t going to go anywhere.

I think some people do, but they’re a different breed.
I don’t think they’re going to go anywhere, because it’s not honest. I feel like it’s important to keep that honesty. People will pick up on it. If there’s a band doing it because they know it will sell and it’s a trend, kids pick up on that. It might work for a minute.

Asking Alexandria has been around for a good minute, so you’ve got that. Obviously, that’s encouraging to Scare Don’t Fear, that you’ve made it.
We’ve always done exactly what we want, even if our label’s been like, no, you need to rewrite this song. We’re like no. … I’ll flat out say no. I’m not doing it.

They responded well to that?
Yeah, like I said, we have a great relationship. A lot of people don’t, though, is the thing.

That’s the sad thing, man. They get locked in and then…
Labels will shelve a record, like, well, we don’t like it. We’re not releasing it. There’s nothing the band can do.

Hopefully Scare Don’t Fear doesn’t end up in that situation either.
Hell no. That’s one of the things. I’ll do whatever the band wants. If that’s their vision, let’s f-cking do it.

If you didn’t believe in it, you wouldn’t have signed them. Were you thinking about doing a European thing, or did you want to do an American thing for sure? Was it something you considered?
I definitely did. That’s the other thing I feel I could bring to the table, too, because we have to sign a band back home in England. You guys can bust your ass in the U.K., but it’s so small. There’s only so much touring you can do. You tour for a month, and that’s it. You’re done. You can’t go back out again because they’ll get sick of you. You come over to the f-cking States, it’s way bigger. There’s a bigger audience for you to play to, and if you take off from the stage, more often than not, the rest of the world will follow suite.

You’re missing the World Cup for this, you know.
I know, I know. I keep getting f-cking tweets about it.

Are you recording it? Can you get the game?
No, I don’t give a sh-t about football anymore.

You gave up on it?
I was like, f-ck sports. They’re just rich as f-ck. Me sitting at home watching sports ain’t going to get me laid. You get way more women with music.

Scare Don’t Fear was posted on July 24, 2014 for HM Magazine and authored by David Stagg.