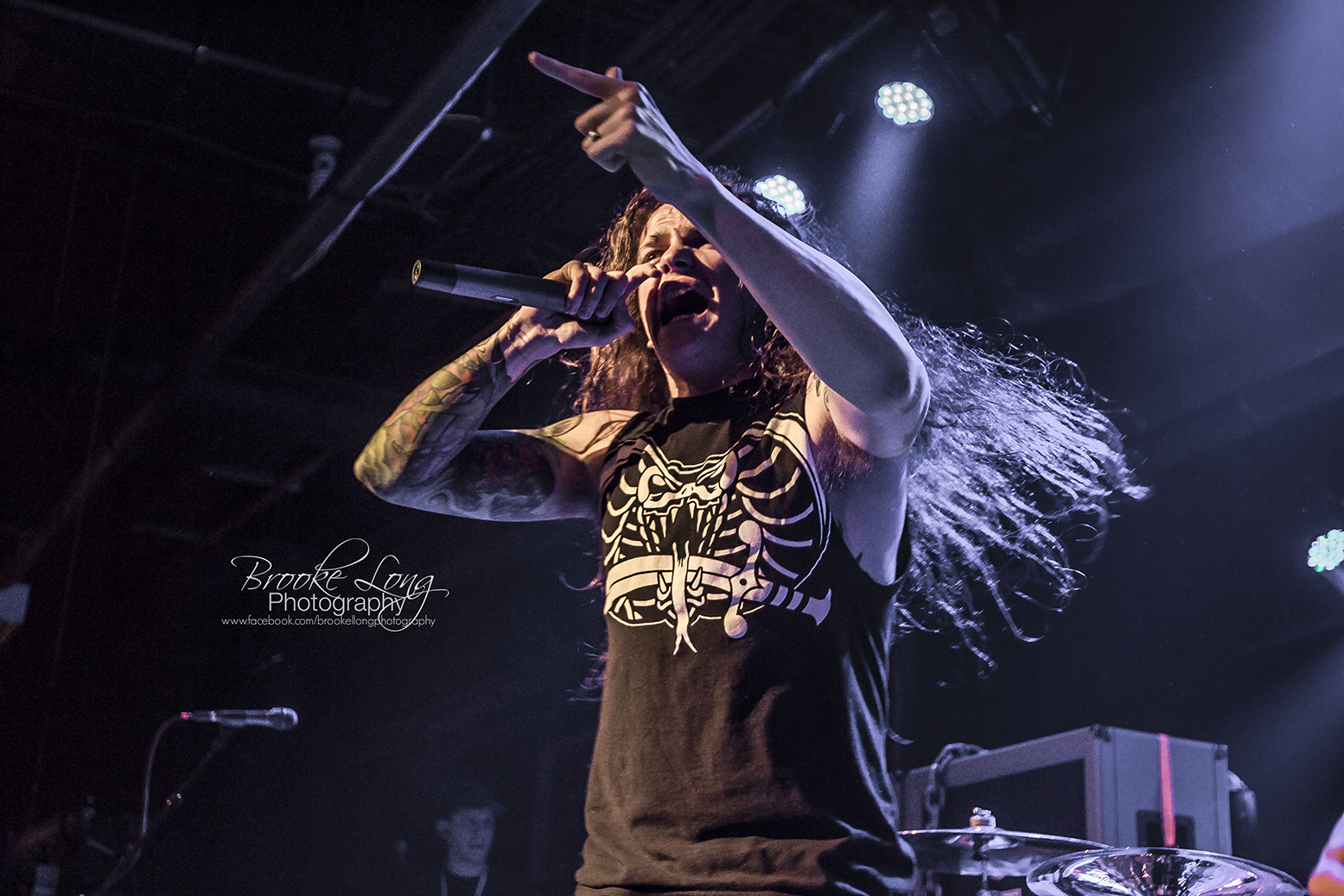 Currently on the Frozen Flame Tour, vocalist Levi Benton checks in with HM from the road to talk about their sellout shows, the current live outlook and a little Riff Raff. 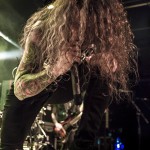 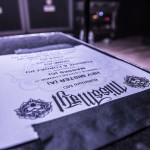 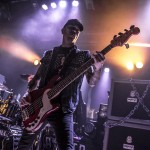 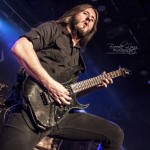 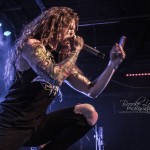 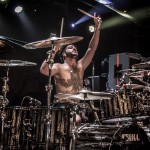 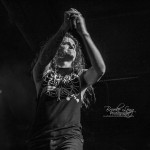 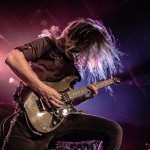 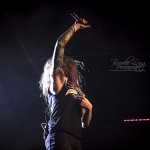 Currently on tour with August Burns Red, Northlane and Fit for a King. I call vocalist Levi Benton on the phone at his request. For what it’s worth, there’s usually a third-party to connect all parties or the person you’re talking to will call you. But he knows he’s busy on tour and never wants to miss an interview. When he’s on stage, he’s everything you want from a frontman: youth, fist-pumping vocals, hair. Off stage, he’s a business man who maintains his own retail and clothing shop, Vursa Unlimited, on the University of Cincinnati campus while touring the country full-time with the same band he’s been in since high school, Miss May I. I talk to him the day after their hometown show, where he admits they can be a little more stressful than you think. Especially when the headlining band asks a favor.

I love live music because anything can happen, like what happened to you recently with August Burns Red. Would you mind talking to me about how that came about? I’m referring to the incident of you singing in place of a certain Jake Luhrs.
It was sort of last minute. We were on our way to Cincinnati. Actually, (August Burns Red guitarist) J.B. from August Burns Red texted me and said, “Hey, Jake is not feeling good. He’s really sick. Is there any way you can fill in for us?” I know their songs, but not by heart or really how they go. I just know them from playing with them.

I was really nervous because I didn’t want to screw it up if I wasn’t 100 percent on it. But they told me all the singers were going to do it, and I was like, “Well, I can’t be the only singer that’s not. I gotta help my brothers out.” I wasn’t going to pass it up.

The only thing really stressful is it was a home show for us. I had to learn these songs and cater to family while I was home. I was hanging out with my wife and family and listening to August Burns Red on repeat in my headphones the whole time I was hanging out. I knew they would do it for us, and that was another reason why I wanted to do it. If the tables were turned they’d help us out. It’s like a big brotherhood on tour.

You talked about your hometown show. You get a little moment to take some time and go be with your family. What does that look like in the landscape of the full tour? Is this what you look forward to the most all year?
We look forward to it, it’s just super stressful because we are already busy during the day running around and doing stuff. On top of that, when it’s your hometown show, all your family comes. The older we’re getting, the more our families grow and everything. Now, not only do I have my mom, I have a mother-in-law, a father-in-law and a sister-in-law. The families are growing, so it’s more and more people backstage. It’s packed.

It’s a little stressful because you’ve got to entertain everybody and keep everybody happy. But it’s also awesome because sending them pictures is only good for so long. Until they are actually at the show, they don’t get the whole idea of everything, so its got its pluses and minuses.

I had never considered the stressful aspect of it. I just imagined you coming home and kicking back on the couch with your mom and drinking everything in her fridge and then playing a show. But I guess it’s nothing like that.
Yeah. That’s what I always tell everybody.

We’re a band where everyone is from the same area, so when we play a hometown show, it’s not like… Some bands, the guitar player is from one state, singer is from this state. We’re all from the same place, so you have to imagine. Everyone usually has about four guest spots per person for their family. That’s about 20 people in a green room, not including friends, really, and closer friends.

So you need to rent out a separate room just for the hometown shows?
(Laughs) Basically, when we play hometown shows. It’s crazy.

That would be fun, though. I’d come party with you guys. I’d pretend I was one of the Bentons. “Yeah! Great week. I know Cousin Anthony.”
That’s how it is. Some people I’m like, “I’ve never even met you, but I guess you are my cousin, so… so cool, man” (laughs).

One of the coolest things about you as an artist is that you also maintain a business background. Your wife mans the helm when you are gone. I can only imagine that’s got to be another level of stress when you get home.
The worst is when we call on the phone. It’s not really a personal call; it’s like a business call. We try to do a cut-off time, like 8 p.m. every day of our life. We don’t talk business after that because that’s not what we want our whole relationship to be about at the end of the day. For a while there, that’s all we talked about. We never really talked about personal or family stuff. It was business all the time. It does get stressful. I get excited when I’m home, too, because it keeps me busy.

You have been on tour basically your whole life. When you are back home, do you even have a semblance of a home life? Some people go back home to high school or they hang out with their buddies where they used to get into trouble. What’s it like for you coming back home?
We don’t really have that. Usually, when we’re home, it’s for such a short amount of time that you have to go see everybody, all the family and friends. But this (past winter) was the longest we’ve been home in a while. We did normal family stuff like you are talking about. The excitement of us being home died out because we were home for so long, so everyone hitting us up.
But this is really all we know. Whenever we’re not in school, we’ve been touring. It is what you said. This is what we’ve been doing our whole lives. It went from school to touring.

It’s weird because this is home for us, but I remember the first show (on the Frozen Flame Tour). I was going a little insane. I remember getting to the first venue. Even though it was cold and the weather sucked, walking in the venue and everyone freaking out, setting up gear, just, like, gaff taping stuff and everything. It felt like a homecoming. It was nice to be like, “Ah! We’re back on tour!”

Whereas for most people who travel, after a week or two they’re ready to head right back home and stay there for a while.
We used to be like that. I remember our first tour, we were freaking out. We’re three weeks out and I’m like, “What the heck? How the hell are we going to live out here?” Now, five years later, after living with each other in vehicles, planes, and buses, it’s home. We’re basically brothers. It’s the best brothers we’ve ever had, man. It’s like a nice little family.

And our crew. We don’t try to have the white collar crew, hired because they are the best of the best. We hire (crew) a little bit for their talent and a little bit for how close we are with them as friends so it’s a whole circle of family on tour.

I think that’s really important. That’s what we’re all here for anyway, right? If you’re not doing that, then what’s the point?
We fire people, too. But we’ve hired one merch guy that was because of business. It was that white collar thing. It did not work out like it does when it’s a friend. After that tour, we switched it back to the O.G. hiring of friends. It’s weird to go on tour with someone you don’t have a background with or are friends with. You just hire them because of their résumé and then you find out a week on tour, you are like, “Man, I am not close to this guy at all.”

Did you see August Burns Red live when you were younger, growing up listening to them? Or was it later?
No. I’ve always known about them. I know their name, and I know they are legends. But I never really listened to them or got into them. Not for any particular reason. I just never got around to them, really.

We did do Warped Tour with them in 2011 or 2012, one of those years. I saw them a couple of times. I remember they were awesome. I didn’t know their songs, though, because I told you I didn’t listen to them. I just saw their talent and I was like, “Wow. These guys are awesome.”

I was going to say! They seem right up your alley.
Yeah. It’s crazy because now I look at discographies and metalcore playlists and I’m like, “Well, we’ve toured with every single band here…”

“We keep getting linked up with these guys. What’s the deal?”
The bucket list at the beginning of the career were bands like Killswitch Engage and As I Lay Dying, and then we did those tours and it’s like, “Oh. Now what do we do?” (laughs).

Start running down the list, man! That’s a blessing to get to be able to have that opportunity.
It is. It is a blessing. It’s crazy to, I guess, write off your whole bucket list and then you have to sit down with everybody and be like, “OK. Now what’s the next goal?”

In that kind of case, that’s where a lot of people find themselves. When you finally get everything that you wanted and you have to look around and go, “Well, if I’m not fulfilled now, what is it?” That’s harrowing for some people.
It is. We’re pretty much fulfilled. I think that’s why we’ve all been humble, easy guys, because we’ve surpassed our goals years ago. From here on out, we’re just enjoying where we’re at and where we are playing. We’re happy to be where we’re at and that we get to do this for a living.

Yeah, there’s a big difference between stressing out about it and just being an easygoing person. If you are just a laid back person, people are like, “Aren’t you supposed to be mad right now?” You are like, “Nah. I don’t really care that much.”
That’s how we are. I’m pretty happy with what we’ve done. At the end of the day, I’m pretty happy about what we’ve accomplished. From here on out, we’re just having some fun.

Yeah, it’s a stellar young career. Let me end with this. Who is choosing the music in the van?
(That) would have to be our drummer, Jerod. He likes playing the tunes. But he’s crazy because he sometimes finds the craziest songs or tracks that are either hilarious or just super freaking awesome. We’ll play a funny song and it’s just like, “How in the hell did you find that song?”

You don’t really want to know.
Yeah. That’s how it is. I don’t want to know how you found this, but it’s hilarious.

What he’s jamming now?
I don’t know. (To Jerod) Jerod, what is your number one jam right now? What have you been jamming? (Pause, laughs) Riff Raff.

Miss May I was posted on February 19, 2015 for HM Magazine and authored by David Stagg.